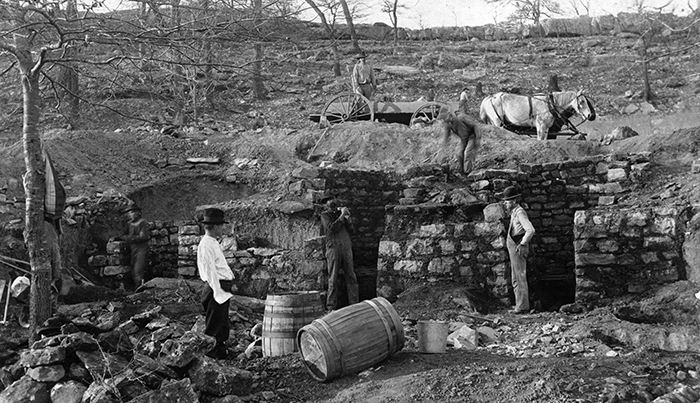 Nineteenth-century New England naturalist and philosopher Henry David Thoreau recognized the importance of limestone when he wrote, "I was as interested in the discovery of limestone as if it had been gold. . . . I read a new page in the history of these parts in the old limestone quarries and kilns where the old settlers found the material of their houses."

Substantial surface and near-surface deposits of limestone occur throughout Oklahoma, but most limestone is produced in the Ozark Plateau region of the northeast and from the Arbuckle and Wichita mountains in the south. Historically, limestone had been mined for crushed stone, lime and cement production, and building stone.

Lime is produced by dissociating the chemical constituents of limestone, which is composed of the mineral calcite (CaCO3), by heating it to temperatures up to 1300° C. This heating process, called calcination, results in the production of lime, or calcium oxide (CaO), and carbon dioxide (CO2). In the nineteenth and early twentieth centuries lime was used mostly in construction for making mortar, plaster, and whitewash, but it also was used for tanning hides, agricultural applications, and sanitation.

Making lime could be as simple as digging a small pit into which fuel (usually wood) and limestone were placed in alternating layers, then allowed to burn for several days. Vertical shaft kilns were built of stone, typically in the side of a hill, wherein alternating layers of limestone and fuel were fed into the top of the kiln, and lime was drawn out of the bottom through a draft or draw tunnel, allowing continuous production. Some kilns were fashioned after beehive coke ovens, wherein the limestone was flash burned. Between 1902 and 1916 lime was produced at various times in several Oklahoma counties, most kilns operating for a year or two before closing.

Modern lime manufacture began in Sequoyah County at Marble City when the Dunlop Company began production in 1937. The company reorganized in 1939 and built a modern shaft kiln twelve miles to the south at Sallisaw, becoming known as the St. Claire Lime Company. It was the only high-calcium lime producer in Oklahoma from 1939 through the twenty-first century. Today lime is used in steelmaking, flue gas desulfurization (smokestack scrubbing), water treatment, metallurgy, soil stabilization, and many other applications.

Limestone quarries provided construction material for many historic buildings in Oklahoma from the early nineteenth century through the twenty-first century. Limestone quarries in the Flint Hills region east of Newkirk for example, produced building stone used in the construction of the Kay County Courthouse. Limestone was quarried for building stone and lime mortar at the site of Fort Sill in Comanche County for the fort's early buildings, palisade, and corral. These structures are listed in the National Register of Historic Places.

By combining calcium oxide, silica, and alumina in large kilns, portland cement is manufactured from the raw materials limestone, shale, and clay, respectively. Mixed with sand, aggregate, and water, portland cement is used in making concrete, and in masonry applications. In the early twentieth century and afterwards, cement plants appeared in Oklahoma wherever limestone and shale were abundant, and coincided with the railroad; inexpensive natural gas and coal were also available for fuel. In 1906 portland cement manufacture began in Washington County at the Dewey Portland Cement Company and also in Pontotoc County at the Oklahoma Portland Cement Company (firing the boilers for the first time in 1907) in Ada. In 1910 the Choctaw Portland Cement Company began construction on a plant near Hartshorne in Pittsburg County, but it never operated successfully. During the mid-twentieth century other plants were built in Tulsa and Mayes counties.

Crushed stone mainly provided aggregate in concrete and asphalt highways and other construction and also provided railroad ballast. Oklahoma was known for its large crushed stone operations such as the Big Canyon mine in Murray County south of Dougherty. Crushed rock production began there in 1886 solely to provide ballast for the Santa Fe railroad. Blast holes were hand-drilled, packed with black powder, blasted, then loaded by hand into mine cars and hauled to the crusher by mule. The quarry remained active until 1993 when the railroad switched to trap rock for ballast. In the early twentieth century some of the largest explosions ever seen in the United States took place in the Big Canyon quarry. Crushed stone increased in importance with the use of automobiles and the need for road paving.

By the twenty-first century limestone remained important as the major raw material of crushed stone, cement, lime, and building stone. Giant, energy-efficient, horizontal rotary kilns, with capacities in hundreds of tons per day, produce portland cement and lime. Fuel is typically pulverized coal or natural gas; but exotic fuels, such as used tires, have been burned as fuel in some cement kilns. Efficiency is increased by capturing hot exhaust gas for use in preheaters that raise the temperature of raw materials before they enter the kiln. In 2001 limestone represented about 60 percent of the reported tonnage of all nonfuel minerals mined in Oklahoma. There were eighty-three mines producing limestone in Oklahoma in 2002, mostly for the crushed stone market.

The following (as per The Chicago Manual of Style, 17th edition) is the preferred citation for articles:
Stanley T. Krukowski, “Limestone,” The Encyclopedia of Oklahoma History and Culture, https://www.okhistory.org/publications/enc/entry.php?entry=LI004.