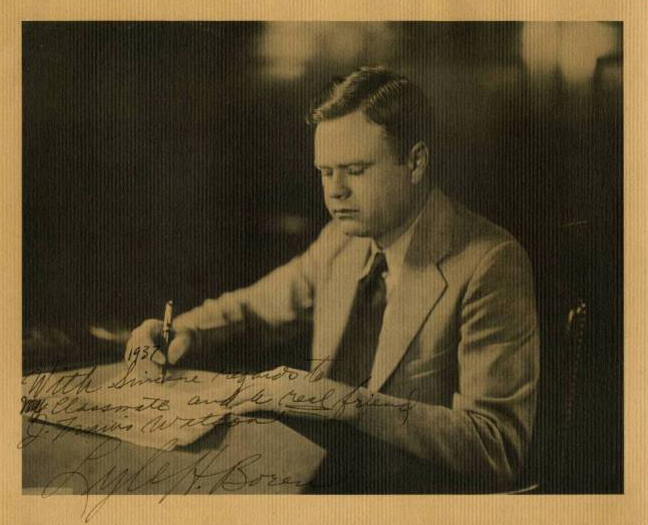 One of the youngest men to ever serve as a member of Congress, U.S. Rep. Lyle Hagler Boren was born near Waxahachie, Texas, May 11, 1909, to Mark and Nannie Boren. He had six brothers, William, John Darrell, Mark Dale, Riley Preston, James Basil, and Henry, and one world-famous sister, Mae Boren Axton, writer of Elvis Presley's first hit song, "Heartbreak Hotel." After farming in southwest Oklahoma, the Borens moved to Choctaw in 1927, and Lyle graduated from high school. He continued his education at East Central State College (now East Central University) in Ada and Oklahoma A&M College (now Oklahoma State University) in Stillwater.

Boren ran for the Democratic nomination in Oklahoma's Fourth District in the U.S. House of Representatives in 1934. Fortunately, he lost; he would not have attained the constitutional age of twenty-five before taking office. In his second campaign he pledged to help farmers, stay out of war, conserve the soil, provide better education, and provide pensions for senior citizens. Boren was elected to the Seventy-fifth Congress in November 1936. A month later, after a long courtship, he married Christine McKown, whom he had met while student teaching in Ada. Their union produced a son, David Lyle Boren, born in 1941 and later governor of Oklahoma, U.S. senator, and president of the University of Oklahoma. In 1948 a daughter, Susan, arrived.

Boren demonstrated his absolute independence in opposing his beloved Pres. Franklin D. Roosevelt on more than one occasion. Boren vigorously fought against the growth of the federal government and excessive federal spending. Despite his opposition to the party line, he was easily reelected every two years until 1944 when he angered labor unions by backing legislation to ban strikes at defense plants. He was narrowly reelected in 1944. However, in 1946 labor unions and an anti-incumbent sentiment allowed returning war veteran Glen D. Johnson of Okemah to defeat him. Although he served as a lieutenant commander in the U.S. Naval Reserve, Boren was criticized for not resigning his House seat for active military duty during World War II.

Boren unsuccessfully tried to regain his congressional seat in 1948. He became one of the state's biggest ranchers and was a founder of the Oklahoma Cattlemen's Association in 1950. In 1957 he moved back to Washington as a lobbyist for the Association of Western Railroads. After retiring, he served as an assistant Oklahoma insurance commissioner. A 1984 stroke left him partially paralyzed. Lyle H. Boren died in Oklahoma City July 2, 1992.

The following (as per The Chicago Manual of Style, 17th edition) is the preferred citation for articles:
Bob Burke, “Boren, Lyle Hagler,” The Encyclopedia of Oklahoma History and Culture, https://www.okhistory.org/publications/enc/entry.php?entry=BO019.