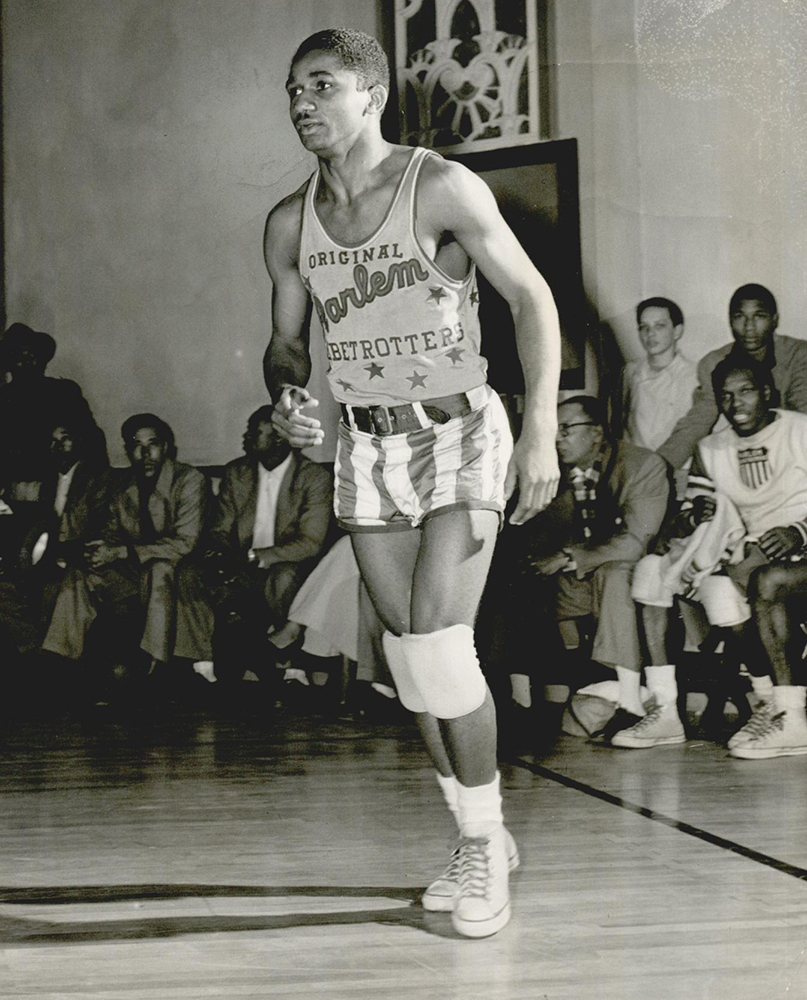 In his forty-six-year career Marques Haynes played professional basketball and was billed as the world's greatest dribbler. Born March 10, 1926, in Sand Springs, Oklahoma, in 1941 Haynes captained the town's Booker T. Washington High School to a Negro national championship held at Tuskegee, Alabama. His team defeated the Oklahoma twins Lance and Lawrence Cudjoe of Seminole's Booker T. Washington. The three later teamed to lead the Langston University Lions to a record of 112 wins to only three losses and a fifty-nine-game winning streak. The trio also anchored Langston to a 1946 upset victory of the Harlem Globetrotters in an exhibition game at Oklahoma City. The next year Haynes and the Cudjoes played in Globetrotter jerseys.

Haynes's first stint as a Globetrotter lasted until 1953. In 1948 and 1949 Haynes and the team defeated the National Basketball Association (NBA) champion Minneapolis Lakers and George Mikan. In 1950 the Globetrotters refused to sell Haynes's contract, depriving him of being the first African American in the NBA; he later declined NBA opportunities in 1953 and 1955. After a contract dispute with the Globetrotters, he created a rival team, the Harlem Magicians, in 1953. During these early years the Globetrotters and Magicians traveled all over the world and played basketball games before dignitaries and global leaders. Contrastingly, they suffered discrimination at home and had difficulty locating hotels and restaurants that would serve an African American troupe. In 1972 Haynes rejoined the Globetrotters as a player and coach, remaining with the team until 1979. From 1979 to 1981 he toured with the Bucketeers. He then played with the Harlem Wizards from 1981 through 1983. His last nine years of professional basketball were with his recreated Harlem Magicians from 1983 until 1992.

Haynes earned the distinction of being the first Harlem Globetrotter player glorified in the Naismith Memorial Basketball Hall of Fame. He has also been enshrined in the Langston Hall of Fame, the NAIA Hall of Fame, and the Oklahoma Sports Hall of Fame. Haynes, Meadowlark Lemon, and Wilt Chamberlain are the only Globetrotters to have their jersey numbers retired. At the dawn of the twenty-first century Haynes resided in Dallas, Texas, with his family. He died on May 22, 2015, at the age of eighty-nine.

Dave Zinkoff and Edgar Williams, Around the World with the Harlem Globetrotters (Philadelphia, Pa.: Macrae Smith, 1953).

The following (as per The Chicago Manual of Style, 17th edition) is the preferred citation for articles:
Larry O'Dell, “Haynes, Marques,” The Encyclopedia of Oklahoma History and Culture, https://www.okhistory.org/publications/enc/entry.php?entry=HA055.