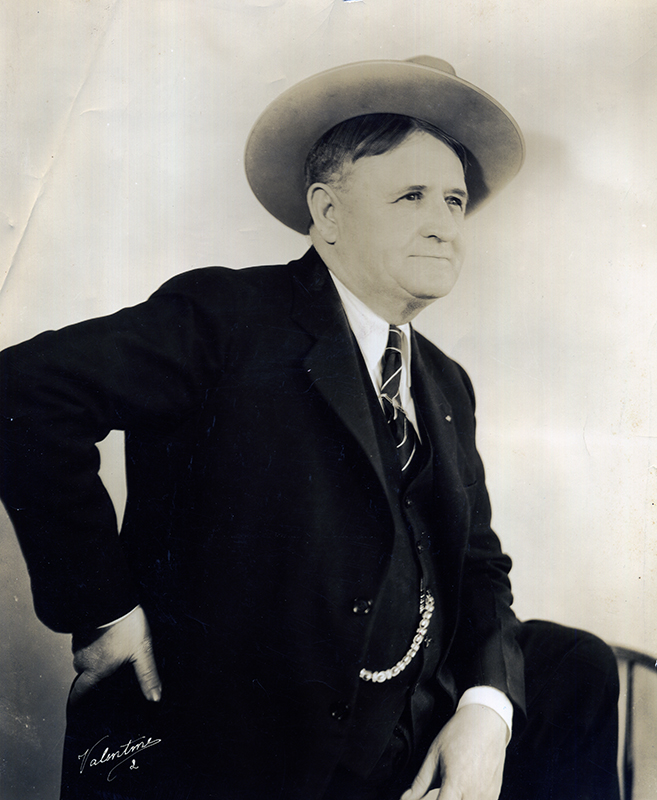 Theodore Roosevelt, who favored single statehood for Oklahoma, was president when the Twin Territories joined to form the state in 1907. He visited the area during the Territorial Era and after statehood. His most eventful trip occurred in 1905 when he accompanied John R. Abernathy and others on a wolf hunt in southern Oklahoma Territory. Roosevelt first became interested in Abernathy in January 1903 when Sloan Simpson, a friend from Fort Worth, Texas, described Abernathy's ability to catch wolves with his bare hands. Roosevelt thought that Simpson was exaggerating, but several months later the story was corroborated by another of the president's friends from Texas, Cecil A. Lyon. Roosevelt accepted his friends' invitation to participate in one of Abernathy's wolf hunts.

On April 5, 1905, Roosevelt traveled through Indian Territory on his way to a Rough Riders reunion in San Antonio, Texas, making short speeches at several towns along the railroad between Vinita and Durant. After attending the reunion, Roosevelt returned to Oklahoma Territory, arriving in Frederick on Saturday, April 8. While giving a speech to the thousands gathered to greet him, he noticed Comanche Chief Quanah Parker and called him to the speaker's stand to shake his hand. Immediately after the speech, the hunting party left for the Big Pasture, an area of 480,000 acres of open range in present Tillman, Comanche, and Cotton counties. Members of the party included the president's personal physician, Dr. Alexander Lambert, several former Rough Riders, a number of cattle ranchers, and Quanah Parker.

Although no hunts were planned for Sunday, they took place on each of the next four days. Roosevelt impressed the other participants with his riding ability during the wolf chases, as he was the only one who could keep pace with Abernathy. At least one other member of the party attempted to catch a wolf, but only Abernathy succeeded. He caught several wolves using a technique of waiting until the wolf leapt at his outstretched arm and then grasping its lower back teeth or tongue before it could bite down, thus keeping the animal's canines from doing any major damage. Roosevelt was impressed with Abernathy's ability and greatly enjoyed the hunts as well as other camp activities. On Thursday evening, April 13, 1905, the president left Frederick to continue his adventures on a bear hunt in Colorado.

The following (as per The Chicago Manual of Style, 17th edition) is the preferred citation for articles:
Matthew Rex Cox, “Roosevelt's Wolf Hunt,” The Encyclopedia of Oklahoma History and Culture, https://www.okhistory.org/publications/enc/entry.php?entry=RO026.