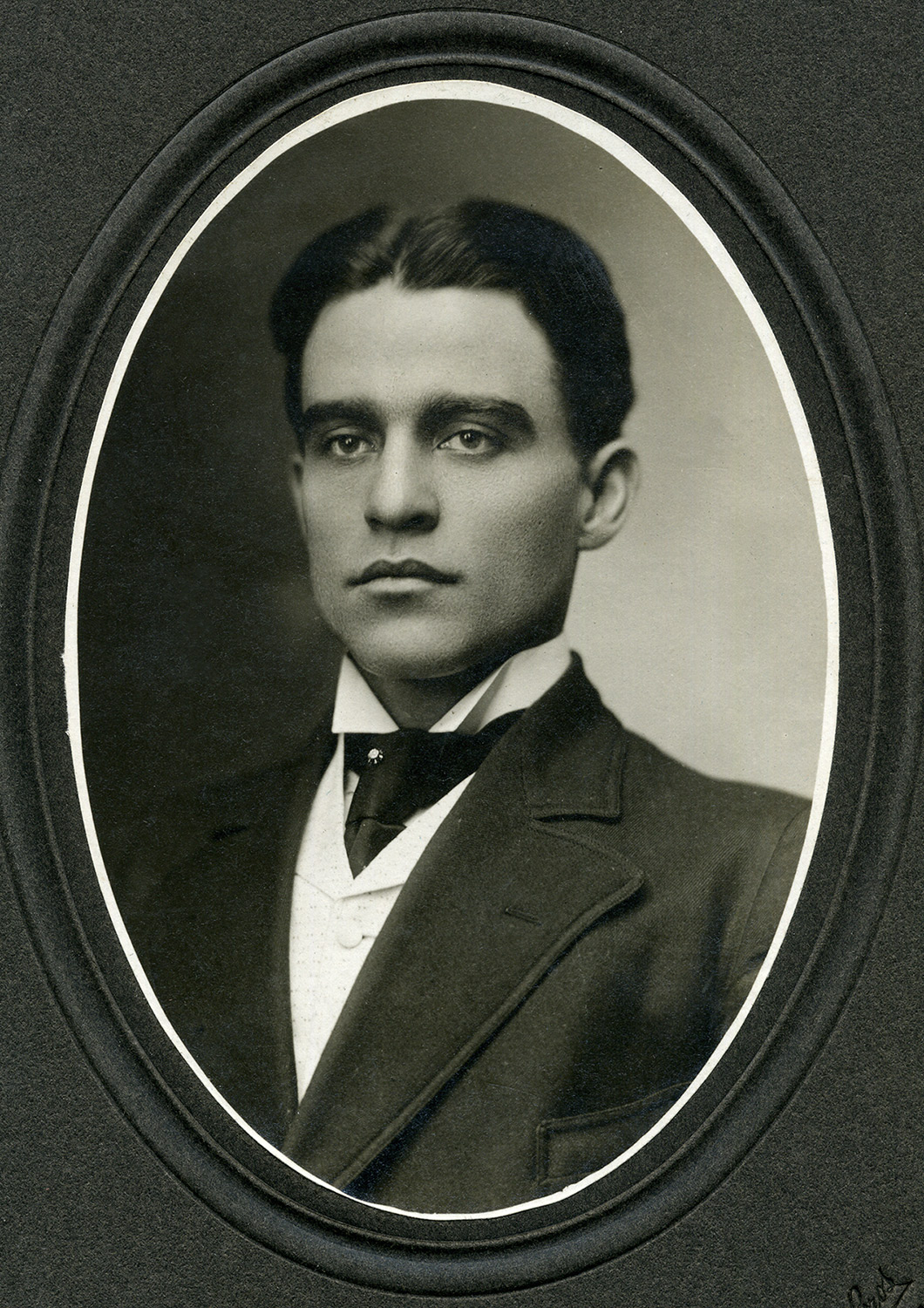 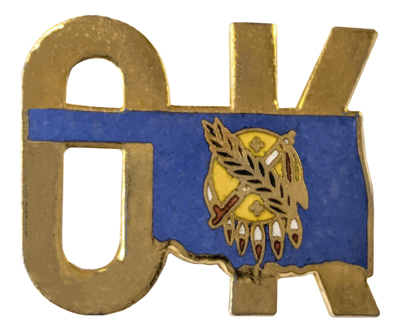 Thirty-four emblems, a flag, and a seal visually represent Sooners to the world. State symbols embody the efforts of citizens and legislators to make visible the essence of place. These items of local notoriety are selected to give "outsiders" an idea of the cultures and history of the peoples living within the geographical boundary that is "the state." Emblems say to the visitor, "This is who we are." With the beginning of the twenty-first century Oklahoma added yet another to its growing pantheon of "state symbols." On April 14, 2004, Gov. Brad Henry signed into law the Oklahoma Rose as the "official state flower." The list did not begin with 1907 statehood; the first was mistletoe, which became Oklahoma Territory's floral emblem by act of the legislature in 1893 and continued in that place of honor after statehood.

The seal was the state's first emblem. Designed by Gabe E. Parker, it was specified in the 1907 Constitution. Parker, who was one-eighth Choctaw, supervised Armstrong School, chaired the Constitutional Convention in 1906–07, and served as federal superintendent of the Five Tribes. The seal is circular, with a field of forty-five small stars representing the other states. In the center is a large, five-pointed star. Each point of the star contains an image from the seal of one of the five tribes. Around the seal is a band bearing the words GREAT SEAL OF THE STATE OF OKLAHOMA, 1907.

The state adopted an official banner in 1911. It consisted of a red field with a five-pointed, white star edged with blue. The number 46, in blue, denoting Oklahoma's position as the forty-sixth state, was placed in the star's center. A new flag designed in 1925 by Louise Fluke was blue and bore an Osage shield and other symbols. In 1941 the word Oklahoma was added to this banner.

In its first sixty years the legislature adopted only a few official state symbols. Oklahoma's designated colors since 1915 have been green and white, and since 1893 the official motto has been labor omnia vincit, meaning "work conquers all things." The scissor-tailed flycatcher was added as official bird in 1951, and the "Oklahoma!" song, by Rodgers and Hammerstein, in 1953 replaced an earlier, unofficial tune called "Oklahoma, A Toast," by Harriet P. Camden. After the adoption of the new song came a state theater company, the Lynn Riggs Players of Oklahoma, Inc., in 1961. The rose rock (rock, 1968) and mountain boomer (reptile, 1969) followed. The 1970s, 1980s, and 1990s saw a proliferation of resolutions memorializing one or another political or economic constituency. A total of twenty-four were adopted during that thirty-year period.

From a topical viewpoint, creatures supply the most numerous emblems and generally represent agriculture, environment, and hunting-fishing, as economic and recreational activities. After the aforementioned mountain boomer and scissor-tail, in 1972 came the bison as the state animal, in 1974 the white (sand) bass as the fish, and in 1990 the white-tailed deer as the game animal, the raccoon as the furbearer, and the wild turkey as the game bird (the latter affirmed in 2006). In 1992 the honeybee became the state insect, in 1996 the black swallowtail was named the official butterfly, and in 1997 the bullfrog was designated as state amphibian. In 2000 the Saurophaganax maximus, a huge, predatory dinosaur that was larger than T. rex, became the official fossil. In 2006 the Mexican free-tailed bat (Tadarida brasiliensis) became the state flying mammal, and that year the legislature also chose a state dinosaur, the high-spined lizard (Acrocanthosaurus atokensis). In 2018 the red-tailed hawk (Buteo jamaicensis) was added as the state raptor. Flora, while underrepresented, also figures in the Oklahoma image. After the mistletoe came the redbud as state tree in 1971, Indian grass as state grass in 1972, the Indian blanket as state wildflower in 1986, and the aforementioned Oklahoma Rose in 2004.

Some emblems are icons of popular culture. In 1973 came an official poem, "Howdy Folks," by David R. Milsten. Music was commemorated by the addition of the Bob Wills favorite "Faded Love" as the country-and-western song in 1988, "Oklahoma, My Native Land" as the children's song in 1996, and "Oklahoma Hills," by Jack and Woody Guthrie, as the folk song in 2001. The waltz became the state dance in 1982, and the square dance assumed the position of folk dance in 1988. "Swing Low, Sweet Chariot," written by Uncle Wallace Willis (a former slave), was named the gospel song in 2011. Musical instruments and their users were not neglected. The fiddle became the official musical instrument in 1984, and the drum became the percussion instrument in 1993. Finally, in 1997 the Sounds of the Southwest were designated the official Western band.

In 1985 the legislature adopted a state beverage, milk, and in 1988 an entire meal. The strawberry became the state fruit in 2005 and the watermelon the state vegetable [sic] in 2007. The official state soil, port silt loam, was so designated in 1987. It appears in more counties than any other soil type. The hourglass selenite became the state crystal in 2005. Items of apparel were not overlooked. A 1982 resolution immortalized an official pin (the large, gold letters OK supporting a sky-blue-colored shape of the State of Oklahoma bearing a fringed shield, peace pipe, and olive branch). In 1999 a tartan (plaid cloth) was adopted and officially registered with the Scottish Tartan Society in Scotland. The tartan's red, white, black, and gold on a field of blue represent people, agricultural and manufactured products, and natural resources.

Those who wonder at the list of Sooner symbols may change their view when they understand that other states have indulged in a similar propensity for showing who they are. For example, South Carolina's state dance is "the shag"; California has a state fife-and-drum band; and New York has an official apple muffin. As befits a former independent republic, Texas has a state air force (Commemorative Air Force, formerly Confederate Air Force) and a designated food, chili, also an Oklahoma favorite. Ohio, home to the Rock and Roll Hall of Fame, has made "Hang On, Sloopy" its official rock-and-roll song. Most states have as many emblems as Oklahoma has, and some have even more. All serve their purpose in projecting some aspect of a people's self-image.

The following (as per The Chicago Manual of Style, 17th edition) is the preferred citation for articles:
Dianna Everett, “State Emblems,” The Encyclopedia of Oklahoma History and Culture, https://www.okhistory.org/publications/enc/entry?entry=ST020.