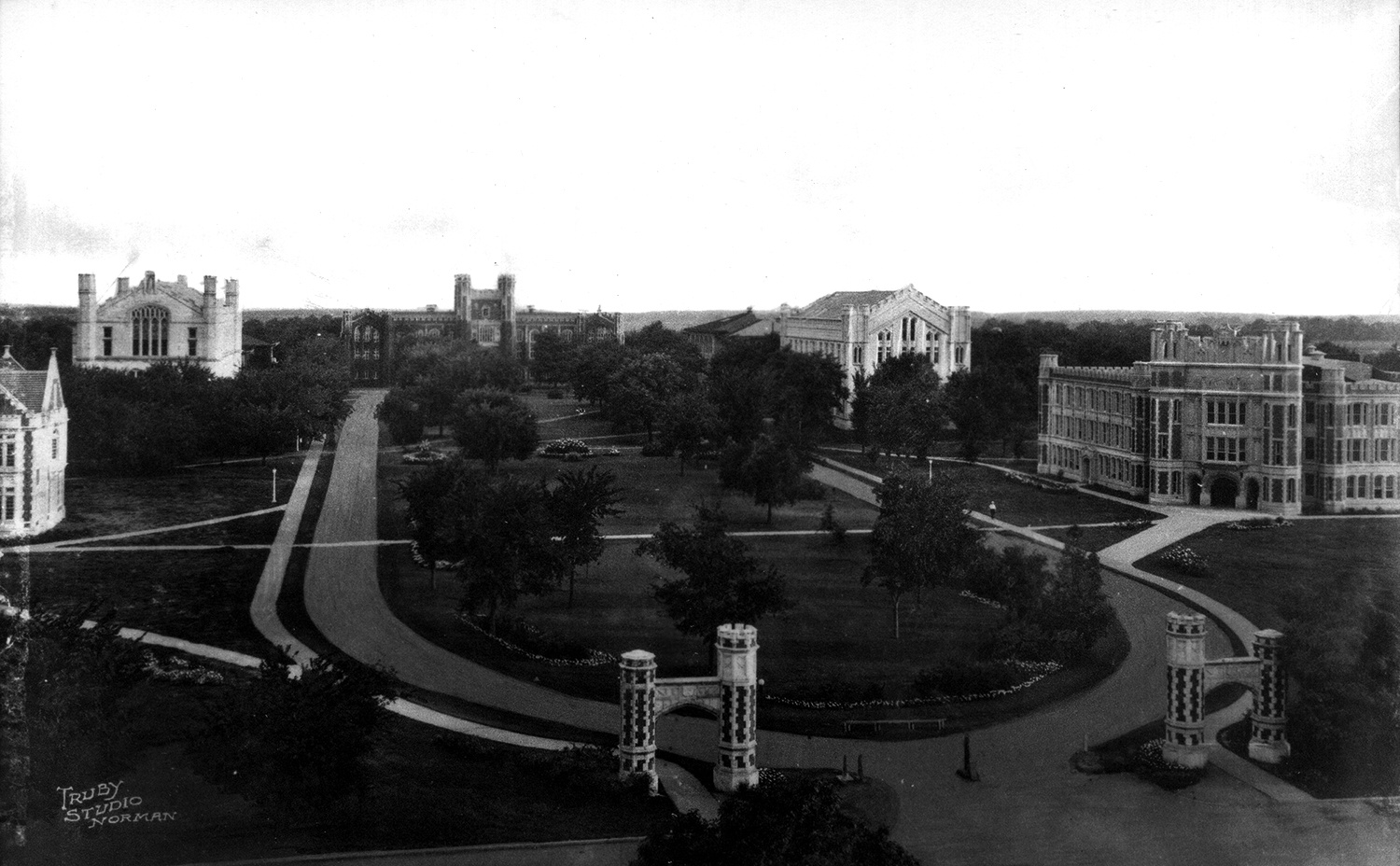 Boyd left after he was fired. With statehood and the ascendancy of the Democrats, the college, which had been controlled by Republicans, was subjected to a rather brutal form of the spoils system. The president and seven faculty members were abruptly dismissed and replaced by friends of the new Democratic regents. The new president, Arthur Grant Evans, was a loyal Democrat and a friend of Gov. Charles Haskell. During Evans's administration (1908–11) the institution slowly continued to grow. A new administration building replaced the one destroyed in the 1907 fire. In 1909 the academic offerings were divided into colleges and deans for the first time. A law school was established in Norman (1909) and a college of medicine opened in Oklahoma City (1910). Like his predecessor, Evans was brought down by state politics.

Julien Monnet served for a year as interim president, until the regents appointed Stratton D. Brooks, a talented administrator who was superintendent of public schools in Boston, Massachusetts. Under his leadership (1912–23) the institution grew in every respect. The student body rose from 866 to more than 5,000. In 1913 new programs such as the schools of business and journalism greatly increased the educational offerings. The school of education became independent from the college of arts and sciences in 1920. The university also began an extension program and, a few weeks after Brooks's resignation, acquired a radio station.

The regents appointed James S. Buchanan, a longtime professor and dean, to take over while they looked for a permanent new leader. He served one year as acting president and another as president (1923–25). In July 1925 William Bennett Bizzell, formerly president of Texas A&M, took over. He was perhaps the ablest all-around leader the college had attracted to this point. He was an accomplished scholar and to him may be attributed the initial turn toward emphasizing research, writing, and publication as well as teaching. He was also an exceptionally fine administrator, efficient, tactful, and devoted to high principles, but not without compassion.

Bizzell's administration (1925–41) consisted of two very different periods, each shaped by the economic climate of the state and the nation. His first six years in office, coinciding with the relative good times of the late 1920s, was characterized by expansion and innovation. During his tenure 147 acres were added to the campus, for a total of 267 acres. The late 1920s also saw the completion of Memorial Stadium, the Oklahoma Memorial Union (both begun before Bizzell's arrival), the first dormitories, and other buildings. The college began to publish a prestigious literary periodical called Books Abroad (1927; now World Literature Today) and an alumni periodical, the Sooner Magazine (1928). The University Press was started in 1929. The School of Geology (1927) organized the study of geology and petroleum engineering that was proving to be of increasing importance to the state's economic life. However, Bizzell's great passion was the library, and he persuaded the legislature to appropriate $500,000 for a new building, which opened in 1930. In these and other ways, including enrollment, OU, like the nation as a whole, prospered substantially during the Bizzell's first years in office.

His last years were much less successful. The Great Depression brought scarcity, frugality, and retrenchment. For example, the budget for the 1931–32 academic year was $1.58 million. Ten years later it stood at $1.55 million. One bright spot in Bizzell's final years was the creation, in 1940, of the University of Oklahoma Foundation to receive and administer private gifts.

Bizzell was replaced by Joseph A. Brandt, who was an OU alumnus and the founding director of the University Press. His administration was controversial and short (1941–43), but it was also characterized by some important developments. He greatly democratized campus governance by establishing a faculty senate and by limiting terms of deans and department heads. Brandt also introduced notions of academic freedom and faculty tenure. He inaugurated the university college so that incoming students could explore their options before selecting a major. These policies, not always introduced tactfully, were greeted with applause as well as animosity. Brandt decided to return to the calmer world of book publishing, but he had implemented changes that made the way easier for his successors.

George Lynn Cross, professor of botany at OU since 1934 and dean of the graduate college since 1942, came to the presidency for a year as acting president and then for another twenty-four years as president (1943–68). As the longest-serving chief executive and, partly for that reason, the most influential in the school's history, he led the university through good times and bad with skillful diplomacy, certain unshakeable values, and extraordinary good judgment. His first challenge was to provide leadership during the dislocations of World War II and the tremendous adjustments that followed. The enrollment skyrocketed, fueled by thousands of veterans coming to college under the GI Bill (in the fall of 1946 almost ten thousand students arrived in Norman), requiring unprecedented expansion in staff, housing, and curriculum. Eventually, Cross saw the construction of thirty-seven new buildings and the donation by the U.S. Navy, in May 1946, of two bases, north and south of the campus, adding approximately fourteen hundred acres to the property.

The quarter-century after Cross's retirement saw some rather rapid changes in leadership. J. Herbert Hollomon (1968–70), Paul F. Sharp (1970–78), William S. Banowsky (1978–85), Frank Horton (1985–88), and Richard Van Horn (1989–1994) came to the presidency from outside the state, and each faced similar problems. Their successes and their disappointments were tied directly to the health of the national and state economy. When it was possible, each increased programs, expanded physical facilities, added to the library holdings, and provided modest salary increases to faculty and staff. In harder economic times each attempted to preserve as much of the academic gains as possible, sometimes reluctantly sacrificing auxiliary parts of the institution. Throughout the period there was an expansion of centralized administration and a consolidation of authority with a system of vice presidents and a provost inaugurated in the early 1970s. Student enrollment remained steady in the range of twenty thousand, and in this period, the size of faculty fluctuated with the economy, but ranged between 800 and 925. Particularly noteworthy during these years was the expansion of the library (acquiring its two-millionth volume in 1984) and the fine arts facilities, as well as the creation of an energy center and a prestigious program in meteorology. The football program, under Coach Barry Switzer (1973–89), experienced a second period of national prominence.

The following (as per The Chicago Manual of Style, 17th edition) is the preferred citation for articles:
David W. Levy, “University of Oklahoma,” The Encyclopedia of Oklahoma History and Culture, https://www.okhistory.org/publications/enc/entry?entry=UN010.