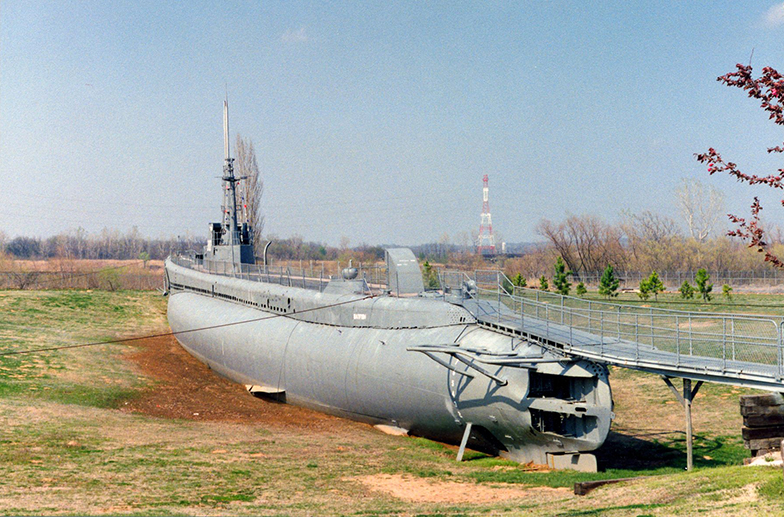 At the Port of Muskogee, Oklahoma, beside the Arkansas River, in 1972 the submarine USS Batfish (SS-310) found a final resting place, far from the Pacific waters where it earned nine battle stars and a presidential unit citation in World War II. The Batfish, launched May 5, 1943, and commissioned August 21, 1943, is a Balao class submarine 312 feet long and twenty-seven feet wide, with a fifteen-foot draft.

The Batfish operated in the Pacific theater from December 1943 through August 1945 and completed seven war patrols. The crew of eighty men sank fourteen Japanese ships and damaged three others. In February 1945 the sub set a Navy record by sinking three enemy submarines in a three-day period. In April 1946 the Batfish was retired, but from March 1952 to August 1958 it operated as a training boat in the Caribbean. In 1969 moored at New Orleans, the Batfish was stricken from the Naval Vessel Register.

The Oklahoma chapter of United States Submarine Veterans, Inc., "adopted" the retired boat in 1971 under the U.S. Navy Ship Donation Program, and the Muskogee City-County Trust Port Authority donated five acres for a display area. In 1972 a flotilla of barges moved the Batfish slowly up the Arkansas River from New Orleans to the Port of Muskogee. By May 1973 the sub rested in a dry berth overlooking the Arkansas River. The boat was fitted with interpretive materials, and a museum was constructed nearby. Opening to the public on Memorial Day 1973, the USS Batfish and exhibits at War Memorial Park have honored World War II submarine veterans of Oklahoma and the nation. At the end of the twentieth century, the Batfish was one of twenty World War II submarines on public display around the United States.

The following (as per The Chicago Manual of Style, 17th edition) is the preferred citation for articles:
Dianna Everett, “USS Batfish,” The Encyclopedia of Oklahoma History and Culture, https://www.okhistory.org/publications/enc/entry.php?entry=US006.