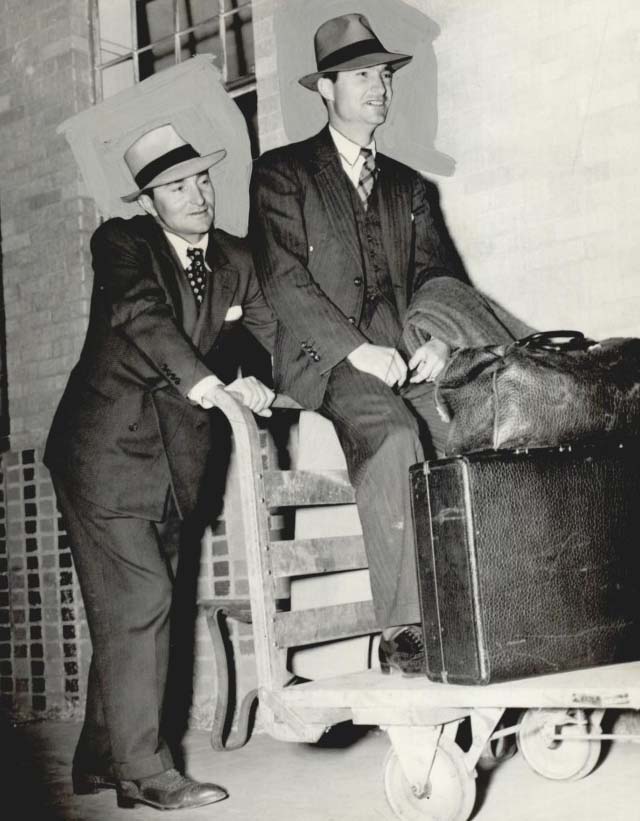 The only brother combination ever elected to the National Baseball Hall of Fame, Paul "Big Poison" Waner, born on April 16, 1903, and Lloyd "Little Poison" Waner, born on March 16, 1906, came out of Harrah, Oklahoma, to play together in the Pittsburgh Pirates' outfield from 1927 to 1940. Together, they amassed 5,611 hits from Paul's rookie season in 1926 to their last season in 1945, about four times as many hits as a whole team gets in a season. Paul was one of the first eight to exceed 3,000 hits, reaching 3,152 for his career, which put him ahead of some outstanding batsmen such as Babe Ruth, Lou Gehrig, Rogers Hornsby, and Ted Williams.

Their father, O. L. "Pop" Waner, played for an Oklahoma City club in 1896, eight years before professional baseball came to Oklahoma. His two sons grew up in Harrah and were playing for an Ada town team during the early 1920s when they were discovered by Pittsburgh scout Joe Devine. Paul Waner played in the minor leagues and joined the Pirates in 1926, batting .336 in 144 games as a rookie. Lloyd played for East Central State College in Ada before playing in the minors and joining his brother in the Pittsburgh outfield during 1927. He batted .355 as a rookie, while Paul batted .380 that year to win the National League batting crown and the Most Valuable Player award. They became known as the "Waner Wonders."

The Pirates won the 1927 National League pennant and played the New York Yankees in the World Series. That Yankee team featured what was known as "Murderers Row," led by Babe Ruth and Lou Gehrig. The Yankees won the Series in four games, but the Waners combined for a .367 World Series batting average (including .400 by Lloyd) compared to .357 combined by Ruth and Gehrig. When the series ended, the Waners joined Ruth and Gehrig on a sixteen-week vaudeville circuit, with Paul playing the saxophone and Lloyd playing a violin.

According to one legend, they acquired their nicknames in Brooklyn, where Paul was called the Big Person and Lloyd was called the Little Person, but it came out Poison in the Brooklyn accent. Both were small and speedy, but Paul had slightly more power. He hit 605 career doubles, 191 triples, and 113 home runs. He wound up with a .333 lifetime average, and he was named to the National League All-Star team four times.

He had 2,955 hits when the 1942 season began and struggled through fifty-two games for the Boston Braves in an effort to reach 3,000. On June 17 he hit a sharp grounder that Cincinnati shortstop Eddie Joost stopped but could not hold. The scorekeeper signaled a hit, and the crowd roared to salute the 3,000th hit, but Waner stood on first base and shouted, "No, no, no." He wanted number 3,000 to be a clean hit. The scorekeeper reluctantly reversed his decision. Two days later Waner ripped a clean single for the record. New York Herald Tribune sports columnist Red Smith wrote that Waner should have a special page in the baseball record book: Most Hits Rejected by a Batter Lifetime—1.

Paul Waner also played for the Dodgers, the Braves, and the Yankees and after retiring in 1945 worked as a batting coach. He was elected to the National Baseball Hall of Fame in 1952. He died on August 29, 1965, in Florida.

Lloyd Waner set a major league record of 223 hits in his rookie year and led the National League in singles in 1927, 1928, 1929, and 1931, setting a league record. At five feet, eight inches tall and 142 pounds, he often ran for hits on ground balls to the infield. He batted .362 in 1930 and wound up his career with 2,459 hits and a lifetime .316 batting average. He was chosen for the National League All-Star team in 1938. He also played for the Braves, the Cincinnati Reds, the Philadelphia Phillies, and the Dodgers and entered the Hall of Fame in 1967.

After retiring from active play in 1945, Lloyd Waner scouted for Pittsburgh and Baltimore until 1955. Returning to Oklahoma, he worked as a foreman for the City of Oklahoma City, where he died on July 22, 1982.

The following (as per The Chicago Manual of Style, 17th edition) is the preferred citation for articles:
Max Nichols, “Waner Brothers,” The Encyclopedia of Oklahoma History and Culture, https://www.okhistory.org/publications/enc/entry?entry=WA016.