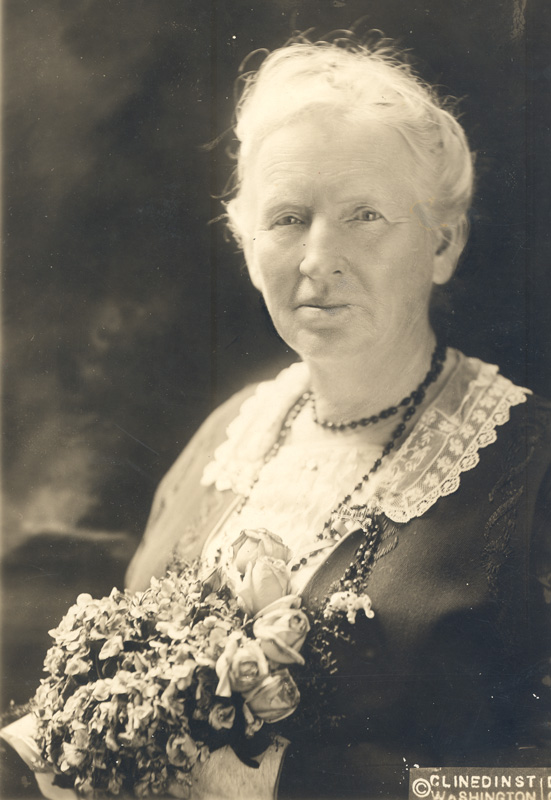 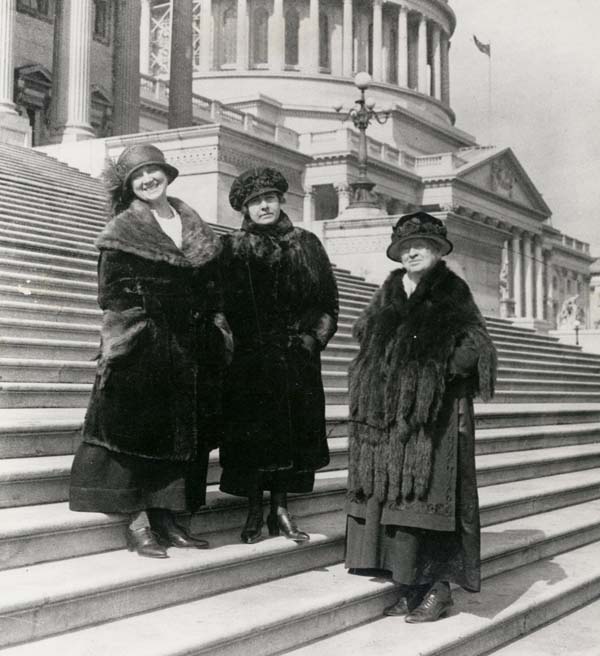 Robertson (on lower step) in front of the Capitol in Washington
(1710, Alice Robertson Collection, OHS).

Affectionately known as "Miss Alice," Robertson was the first woman elected to Congress from Oklahoma and was America's first female postmaster of a Class A post office. She was born January 2, 1854, at Tullahassee Mission in the Creek Nation of Indian Territory, to William and Ann Eliza Worcester Robertson. Robertson's grandfather was missionary Rev. Samuel Worcester.

Alice Robertson's early schooling was under the supervision of her parents. At age eighteen she was sent to Elmira College in New York, graduating near the head of her class. She was a clerk in the U.S. Indian Office in Washington, D.C., from 1873 to 1879. Returning to Indian Territory, she taught in the school at Tullahassee and later at Carlisle Indian School, Carlisle, Pennsylvania. In 1882 Miss Alice again returned to her home at Tullahassee and established the Nuyaka Mission. She was placed in charge of an Indian girls' boarding school, an institution that developed into Henry Kendall College (now the University of Tulsa).

In 1900 Robertson was chosen as supervisor of the Creek Indian schools, a post she held until 1904 when Pres. Theodore Roosevelt appointed her as postmaster at Muskogee. Overcoming the difficulty she encountered as a female supervising male postal workers, she was Muskogee postmaster until 1913.

Miss Alice was always known for her assistance to America's soldiers. She helped recruit troops for Teddy Roosevelt's Rough Riders during the Spanish-American War of 1898 and personally prepared a field kit, with sewing necessities and a small Bible, for each soldier who left for the war. When fifteen thousand troops passed through Muskogee in 1916 en route to the Mexican border to pursue Pancho Villa, she met the trains and provided the men with sandwiches, cake, and milk. The ingredients had been grown on her farm, named Sawokla (the farm's name was taken from a Creek-language word meaning "gathering place"). She continued to assist America's fighting men when the United States entered World War I in 1917.

Sawokla was also the name of Robertson's restaurant in downtown Muskogee. She fed as many as six hundred people per day in the years after World War I. In 1920, concerned about the direction of American society, she ran as a Republican for the Second District seat in the U.S. House of Representatives. Her platform was simple: "I am a Christian, I am an American, I am a Republican." She used the classified section of the newspaper to report on her campaign. A typical advertisement read "Watermelons every day. Fried chicken extra good tonight. Our campaign seems to be going very well."

Robertson rode the coattails of Pres. Warren G. Harding and was elected to Congress from the Second District as a Republican in heavily Democratic eastern Oklahoma. She arrived in the nation's capital with much talk of her being a woman, an old-fashioned one at that. She was sixty-six years old and had never been married. Only the second woman elected to the Congress, Miss Alice was the first woman to preside over the House of Representatives. After her election she announced that she would concentrate on promoting legislation to better the lives of Indians, women, farmers, soldiers, and working people. Then, unfortunately, she attacked the newly formed League of Women Voters, thinking it to be a "women's rights" group. Miss Alice failed to win reelection in 1922. Fledging women's groups and the Ku Klux Klan were among the many that campaigned against her.

The former member of Congress lived much of the rest of her life in poverty. President Harding secured her a position in Muskogee at the Veterans' Hospital in May 1923. Monthly stipends from friends such as Lew Wentz of Ponca City and a $125 monthly salary for her position as a research assistant for the Oklahoma Historical Society kept Miss Alice from starvation for the remainder of her existence. She died in Muskogee on July 1, 1931.

The following (as per The Chicago Manual of Style, 17th edition) is the preferred citation for articles:
Bob Burke, “Robertson, Alice Mary,” The Encyclopedia of Oklahoma History and Culture, https://www.okhistory.org/publications/enc/entry.php?entry=RO004.