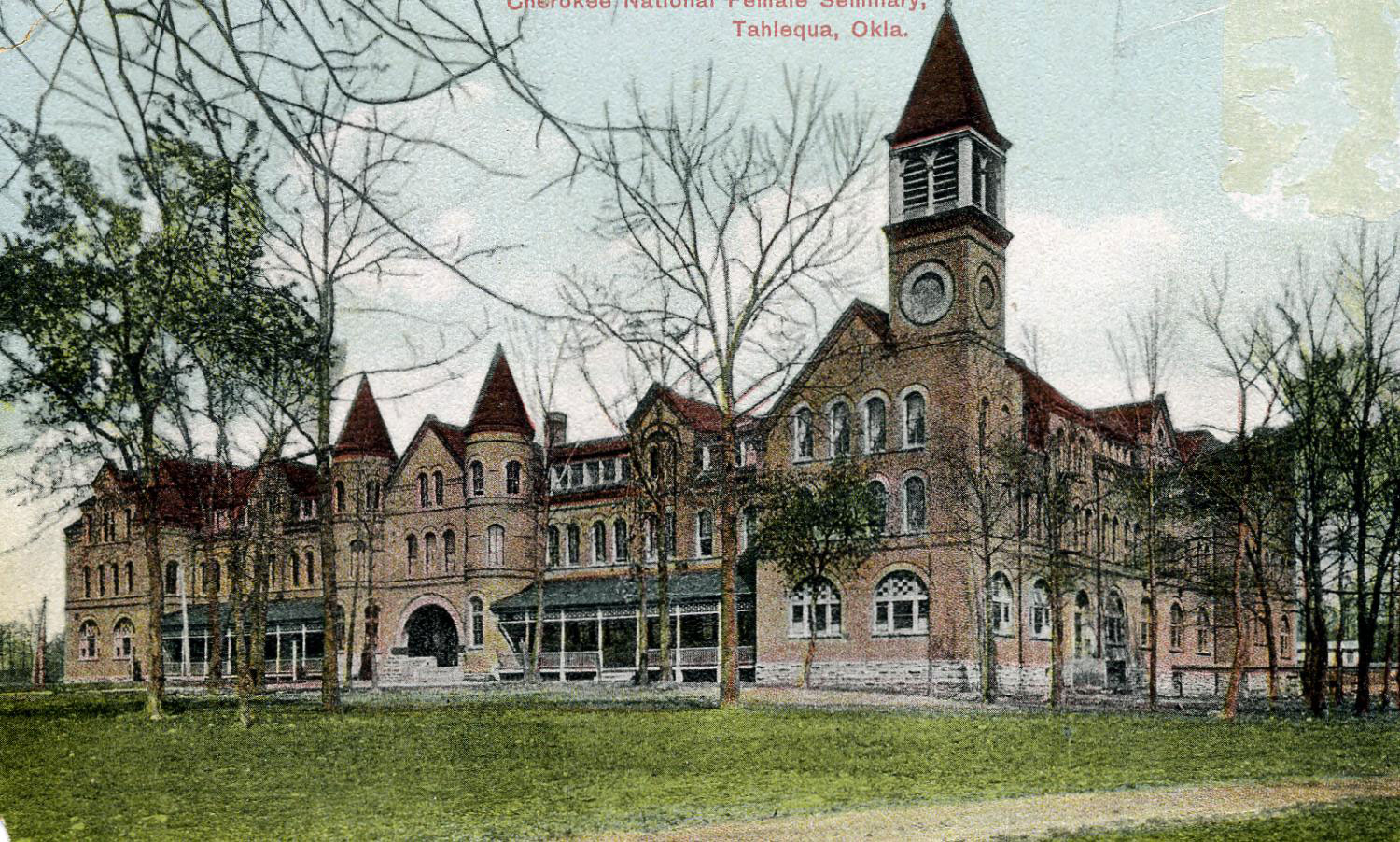 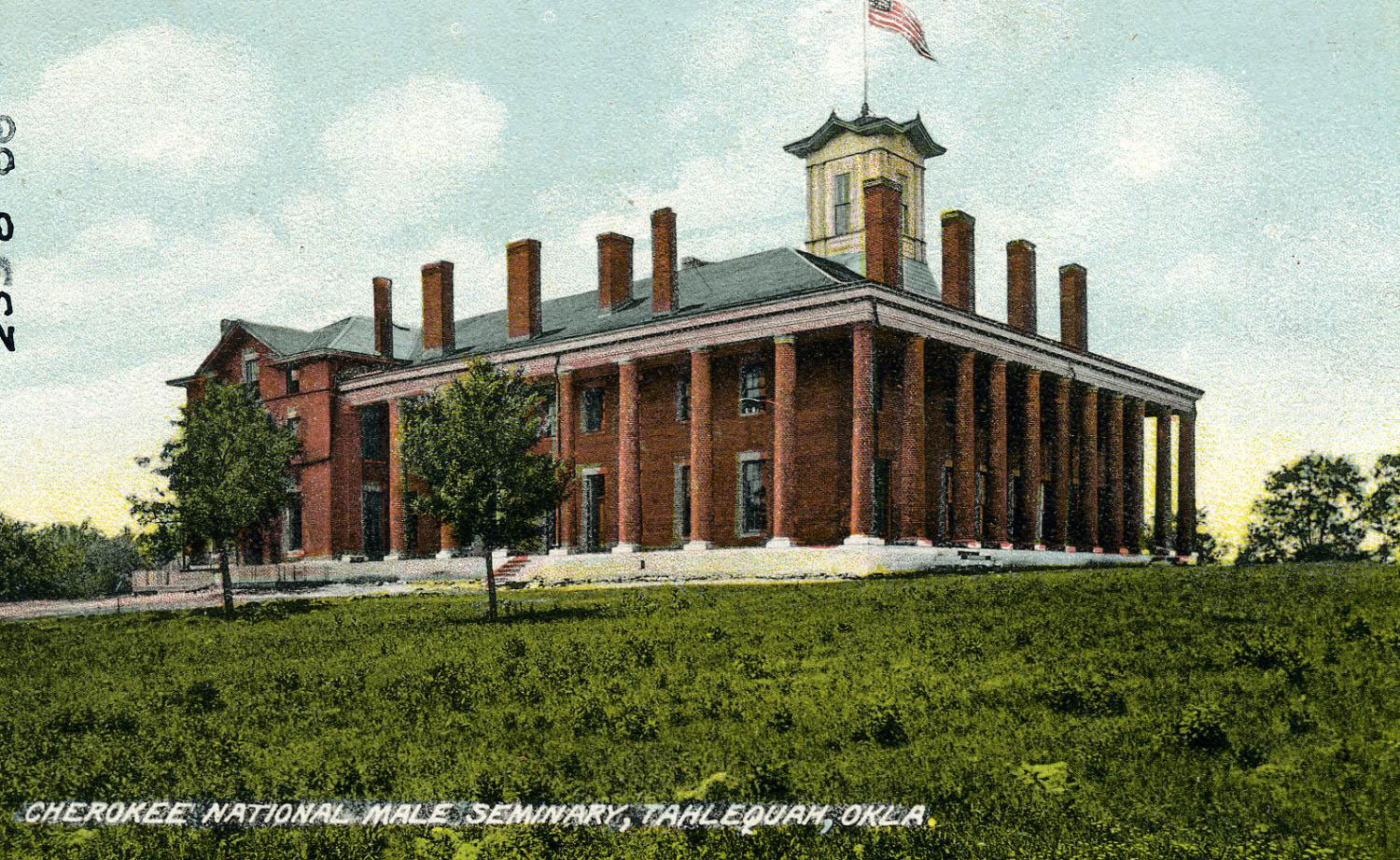 The Cherokee Male and Female Seminaries were boarding schools opened by the tribal government in 1851. The male school stood southwest of Tahlequah, and its female counterpart north of Park Hill. In identical, three-story, brick structures, the Cherokee Nation offered students a high school education. The preparatory curriculum of the Male Seminary included Greek, Latin, German, and French; chemistry, botany, geology, astronomy, and zoology; geography, U.S. and English history, political economy, and philosophy. While not as rigorous, the Female Seminary's curriculum was academically challenging. Ironically, neither seminary offered instruction in Cherokee language, history, and culture. The year before the schools opened, Cherokee representatives visited New England, seeking teachers. The men and women they employed from Yale, Mount Holyoke, and Newton Theological Seminary became the first of many Eastern-educated teachers who traveled to Indian Territory to teach in the two schools.

Prospective students first must pass a two-day examination, and the successful were educated at tribal expense. Although most students came from affluent, mixed-blood homes, the attrition rate was high in the early years. Twenty-six women and thirteen men were graduated from the seminaries by 1856. By that year the Cherokees had encountered economic problems. Neither seminary accepted students for the 1856 fall semester. The Civil War dashed the tribe's plans to reopen the seminaries. Used as warehouses, hospitals, and even stables, the buildings were in shambles when the war ended. A destitute Cherokee Nation could not reopen its schools until the 1870s. By mid-decade improving financial conditions enabled the Cherokees to renovate both facilities and hire additional teachers.

Because tribal resources were limited, students paid for room and board when the seminaries reopened. Children of tribe members unable to pay could enroll in an indigent department. To attract more students, the seminaries admitted children from other tribes; admission requirements were reduced, and the national council created a primary department composed of grades one through five and a preparatory department encompassing grades six through eight. Oklahoma historian Grant Foreman claimed that "the Cherokee Nation had a better common school system than either Arkansas or Missouri." Both institutions attracted dedicated teachers, but Miss A. Florence Wilson, hired as principal teacher in 1875, made a lasting impression in her quarter-century of service. Administering daily doses of sulphur and molasses and presiding over rigorous walks, she enforced discipline with an iron hand.

The educational routine at the Female Seminary was shattered on Easter Sunday in 1887 when fire demolished the building, but Miss Wilson got all the girls out. Two years later the school reopened just north of Tahlequah. Although both schools offered education rarely equaled in the surrounding states, in the years before Oklahoma 1907 statehood federal officials began systematically reducing the authority of tribal government, including its administration of education. Two years after statehood Oklahoma bought the Female Seminary for forty thousand dollars to house a state teacher-training school. The next year the Male Seminary, which was being operated by the tribe as a coeducational facility, burned. Commencement exercises held at Northeastern Normal School in the spring of 1910 honored the last students to earn degrees at the Cherokee National Seminaries.

Brad Agnew, "Legacy of Education: The History of the Cherokee Seminaries," The Chronicles of Oklahoma 63 (Summer 1985).

Devon A. Mihesuah, Cultivating the Rosebuds: The Education of Women at the Cherokee Female Seminary, 1851–1909 (Urbana: University of Illinois Press, 1993).

The following (as per The Chicago Manual of Style, 17th edition) is the preferred citation for articles:
Brad Agnew, “Cherokee Male and Female Seminaries,” The Encyclopedia of Oklahoma History and Culture, https://www.okhistory.org/publications/enc/entry.php?entry=CH018.