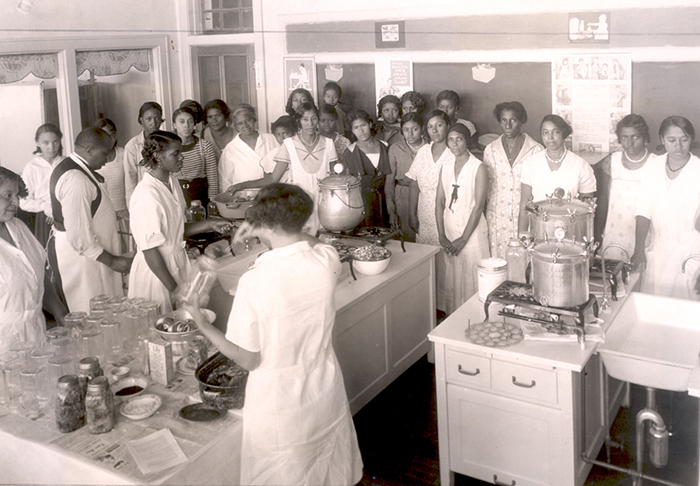 Based at Oklahoma State University, the Cooperative Extension Services provides agricultural education to the state's farmers and farm families. Oklahoma was primed for cooperative extension work well before the Smith-Lever Act of May 8, 1914, brought it officially into existence. At statehood in 1907 W. D. Bentley had been assigned to do extension work for the western half of Oklahoma from his U.S. Department of Agriculture (USDA) office in Wichita Falls, Texas. W. M. Bamburge worked in the eastern half of the state. They hired other agents, who earned seventy-five dollars a month, worked long hours, and were expected to use personal money when needed to deliver educational news about agriculture with a "missionary zeal." By 1914 the Agricultural Special Train, billed as a "county fair on wheels," was touring the state, bringing advice for the farm and rural home as it went. It transported and exhibited horses, cattle, sheep, hogs, and poultry raised at the Oklahoma A&M College (now Oklahoma State University, OSU). One two-week tour drew almost fifty thousand visitors, and one stop in Woodward drew more than thirty-five hundred. People were hungry for information.

By July 1914, when the USDA and Oklahoma A&M University signed an agreement for the Oklahoma Cooperative Extension Services (OCES), Oklahoma had forty-four county agents, two district agents, seventeen women agents, a state agent, and two assistant state agents. OCES headquarters were moved from Oklahoma City to Oklahoma A&M, and all existing records reached Stillwater just in time to be destroyed by a fire in Morrill Hall on August 6, 1914. Nevertheless, seeds had been planted, and the cooperative extension activities could not be stopped. By 1916 there were sixty county agents and twenty-one women agents.

Cooperative extension specialists worked closely on all fronts with researchers to bring the latest varieties, techniques, and programs to the public. Although Bermuda grass is now common in Oklahoma, it had originated in Africa, and the new agents pushed hard for its use as a complement to native pastures. Dissemination and use of vaccines against blackleg, anthrax, hog cholera, and Texas fever in animals was widespread. By 1927 the OCES had logged more than 1.5 million on-farm visits and fielded more than 3.5 million calls to extension offices. By introducing drought-tolerant crop varieties, terracing, and planting of windbreaks OCES helped conquer the terrible Dust Bowl in the 1930s. In the 1950s the development and promotion of one chemical to control greenbugs on wheat added $4.5 million to state farm income.

Agricultural output increased 50 percent from 1940 to 1960, yet the number of workers decreased by a third. Output for man-hours was doubled. Farm management became a byword in the 1960s and 1970s as OCES taught ways to cut costs, maximize efficiency, and aim at the most profit per acre. Hard times struck again in the 1980s, when prices for wheat, beef, and oil took Oklahoma's economic breath away. A program known as IFMAPS (Intensive Financial Management and Planning Support) helped state farmers reorganize their debt load and convinced lenders to make farm-sustaining loans, even for some applicants who had been turned down.

With the 1990s came the realization that while core agricultural programs were still essential, only 2 percent of the population lived on farms. Urban agriculture rose to prominence, and again, the extension service rose to the challenges. Programs to help towns and cities with urban plantings, environmental watchfulness, and home gardening were implemented. At-risk children and "latchkey" children were provided with educational and safety programs, and nutrition education programs were aimed at poor families.

Economic improvement of underdeveloped communities came to the front. OCES assisted in recent economic recovery efforts for the Greenwood District of north Tulsa, which still had lingering effects from its devastation in the racial violence of 1921 and urban renewal of the 1970s. Extension specialists also investigated ways to lure medical facilities and clinics to these areas. Although it may not have kept the popularity or name recognition that it had in 1914, OCES activities continued to serve Oklahoma into the twenty-first century, "turning the good things of science into the good things for life."

The following (as per The Chicago Manual of Style, 17th edition) is the preferred citation for articles:
Fred Causley, “Cooperative Extension Services,” The Encyclopedia of Oklahoma History and Culture, https://www.okhistory.org/publications/enc/entry.php?entry=CO053.