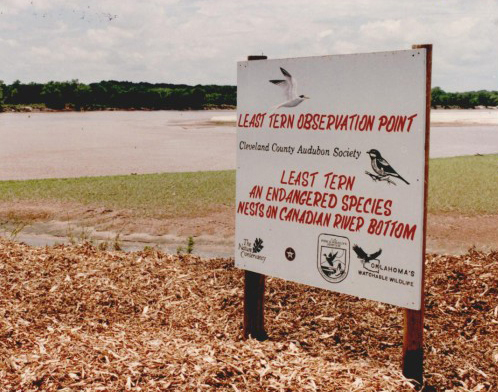 Between 1992 and 2021 numerous changes, based on constant observation and evaluation, took place in the federal listings. The bald eagle was reclassified as threatened and then delisted entirely in 2007. The falcons, black-capped vireo, least tern, and American alligator were also delisted due to recovery. The scaleshell mussel (Leptodea leptodon) and Neosho mucket (Lampsilis rafinesqueana, a mussel) were placed on the endangered list, as was one plant, Harperella (Ptilimnium nodosum, mock bishops weed). The Neosho madtom and American burying beetle were downlisted from endangered to threatened status. Other additions to the federal threatened list included the Northern long-eared bat (Myotis septentrionalis), rufa red knot (Calidris canutus rufus, a migratory shorebird), rabbitsfoot (Quadrula cylindrica cylindrica, a freshwater clam), Arkansas River shiner (Notropis girardi, a minnow), and Eastern prairie-fringed orchid (Planathera leucophaea), and Western prairie fringed orchid (Platanthera praeclara). The lesser prairie chicken (Tampanuchus pallidicinctus), listed in 2014 as threatened, was delisted in 2016. In addition, a number of animals are "species of special concern," which state and federal agencies watch closely and may soon be declared to be threatened.

In 1981 the state legislature passed an act that allowed Oklahomans to donate money through their state income tax form to be used in nongame wildlife management. The Oklahoma Department of Wildlife Conservation administered the programs aimed at protecting endangered species. Oklahoma penalties for hunting, harassing, or capturing the animals was a fine up to one thousand dollars and/or up to thirty days in prison. The federal government set the maximum criminal fine at fifty thousand dollars and/or one year in prison. It also provided a civil fine as high as twenty-five thousand dollars, and in 2016 the penalty increased to almost fifty thousand. In 1992 funding expired for Endangered Species Act of 1973. The law has remained in force, and Congress has continued to appropriate money. Reauthorization bills have been introduced, but none had been passed.

The following (as per The Chicago Manual of Style, 17th edition) is the preferred citation for articles:
Larry O'Dell, “Endangered Species,” The Encyclopedia of Oklahoma History and Culture, https://www.okhistory.org/publications/enc/entry.php?entry=EN003.