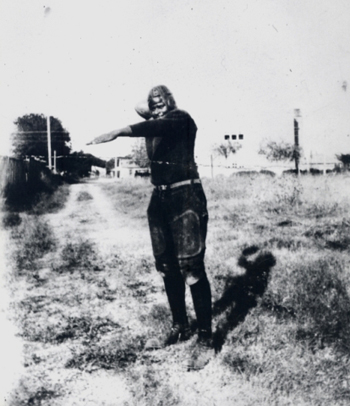 Ira Hall made special contributions to education and civic involvement in Oklahoma. Born on August 25, 1905, and raised in Colbert, Hall received a small award to begin his education at Oklahoma Colored Agricultural and Normal University (now Langston University). Determined to graduate in spite of being orphaned at age fourteen, he interrupted his education five times to earn tuition and living expenses. In 1932 Hall was one of the first three students to graduate from Langston with a bachelor of science degree in business administration. After graduating, he became principal of the "separate school" (racially segregated school) in Colbert, the first of his many appointments. The scholastic accreditation improvements that his Colbert school achieved earned him the superintendent position in Clearview. In 1947 Dr. Oliver Hodges was elected state superintendent of public education and in July appointed Hall as assistant director of secondary education for separate schools. This was the first time that an African American held this position. In this capacity he made it a priority to improve teacher qualifications, library holdings, science materials, and class curriculums for all ninety-seven African American high schools in the state. Hall continued his education by earning a master of science degree in educational administration from the University of Oklahoma.

Following three years of court litigation beginning in 1944, Hall and his family were forced to abandon a home purchased in Oklahoma City, because a restrictive covenant prohibited African Americans from occupying property in certain areas. Later, as founder of Hall Fidelity Real Estate Company, he was the first realtor to sell homes to black residents in several Oklahoma City neighborhoods in the early 1960s.

Hall's commitment to civic and community involvement was self-evident. He presided over twenty organizations and served on more than thirty boards and commissions. Ira Hall died on December 4, 1989, in Oklahoma City.

The following (as per The Chicago Manual of Style, 17th edition) is the preferred citation for articles:
Bruce T. Fisher, “Hall, Ira DeVoyd, Sr.,” The Encyclopedia of Oklahoma History and Culture, https://www.okhistory.org/publications/enc/entry.php?entry=HA008.