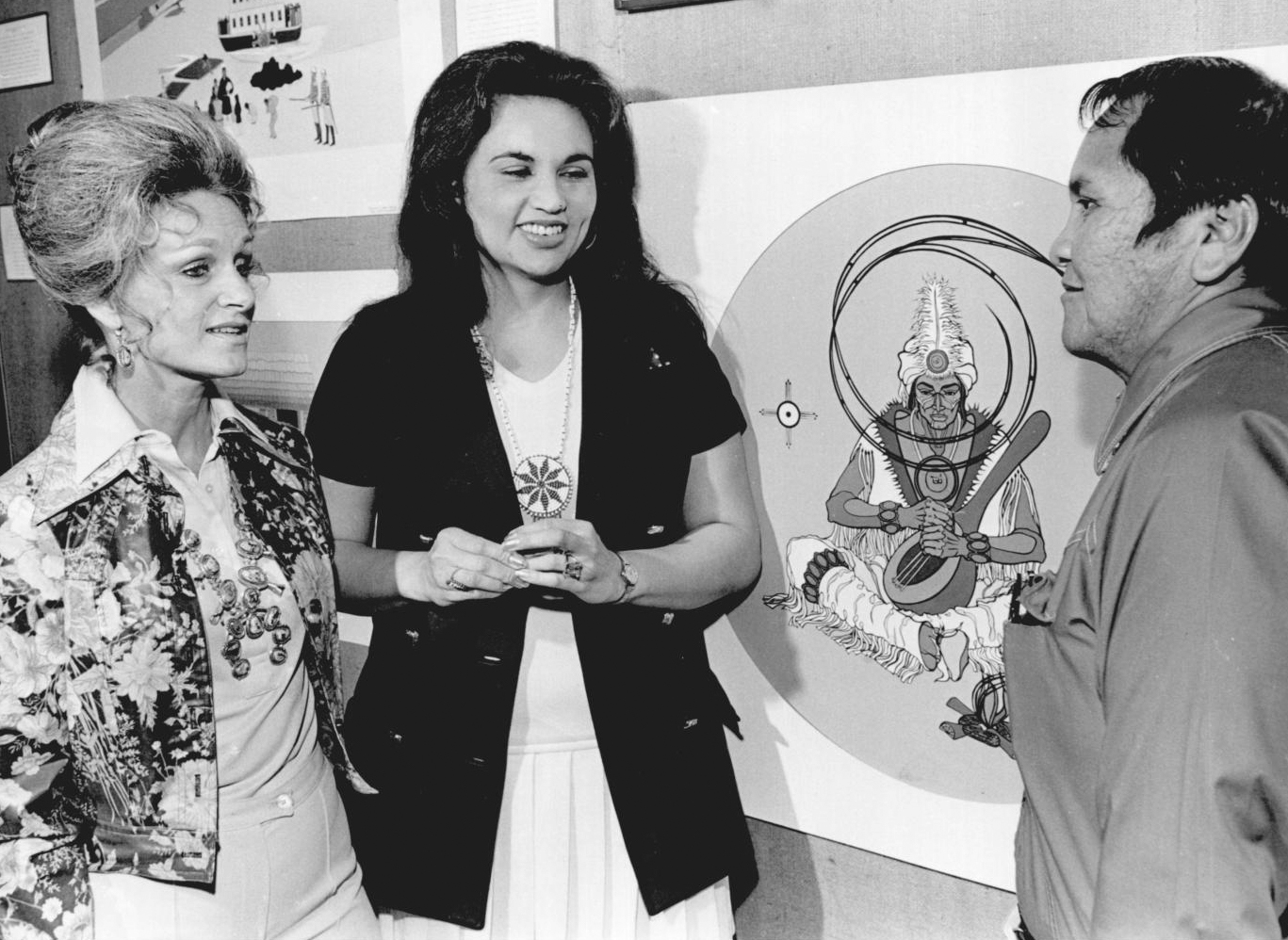 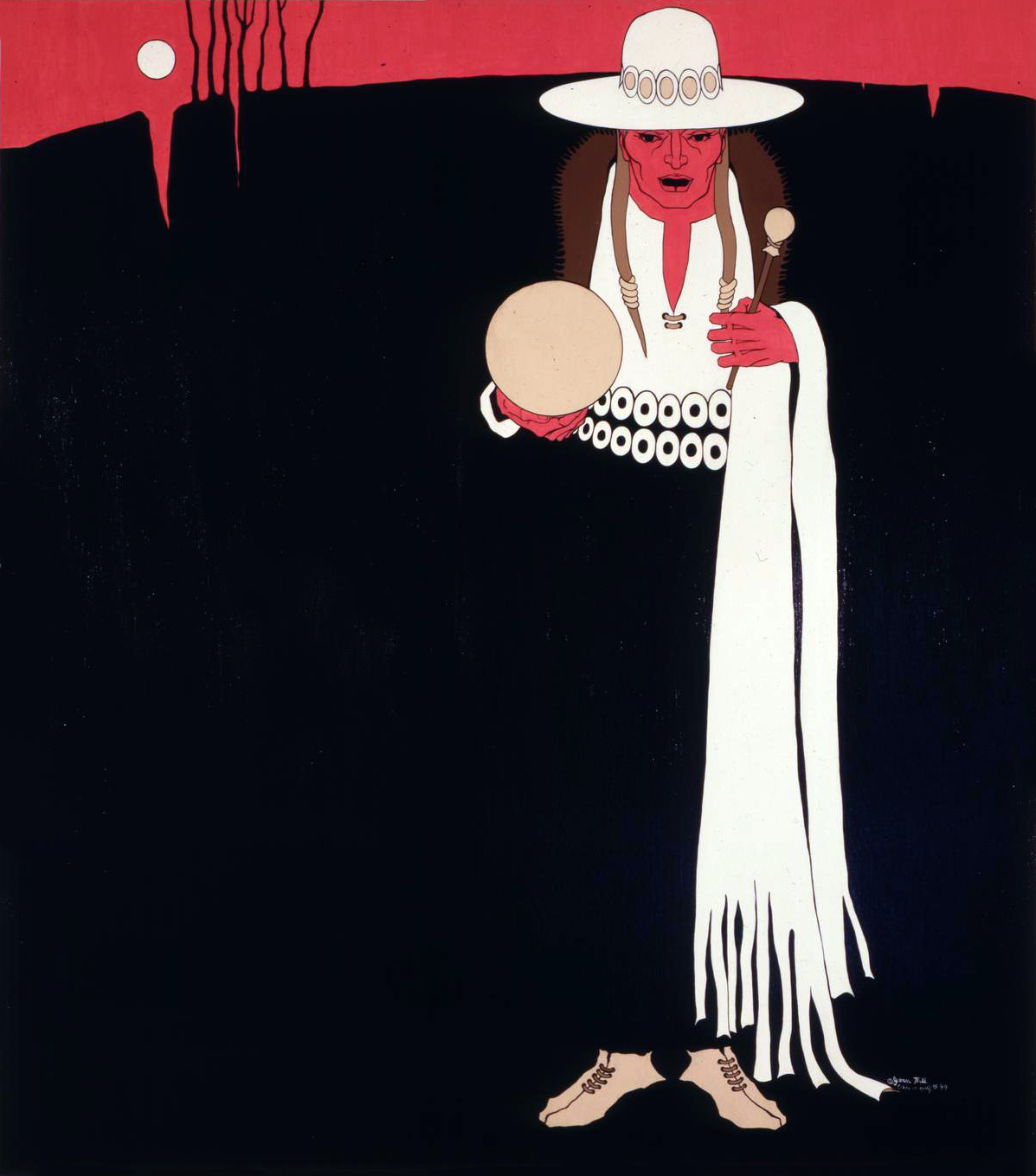 Of Creek-Cherokee descent, artist Joan Hill (Cherokee name Chea-Se-Quah, or Redbird) entered the world in Muskogee, Oklahoma, on December 19, 1930, daughter of William M. and Winnie Harris Hill. Her grandfather Red Bird Harris was a noted Creek leader. Educated in the Muskogee public schools, the artist attended Muskogee Junior College and Northeastern State University, Tahlequah, receiving a bachelor's degree in education. She also studied with Frederick Taubes and Dick West and took courses in art at the Philbrook Museum. As she was not raised in an American Indian tradition, West encouraged her to observe and learn from traditional Indian cultures, history, and art. After teaching at Roosevelt Junior High School in Tulsa from 1952 to 1956, she devoted full time to painting, except for a period as director of the Muskogee Art Guild from 1958 to 1964. During the 1960s prominent venues such as the Gilcrease Museum, the Oklahoma Art Center, the Southern Plains Indian Museum (Anadarko), and the Museum of New Mexico exhibited her works.

Joan Hill has painted in several styles, including realism, abstraction, expressionism, and abstract expressionism, and in a wide variety of media, including oil, tempera, watercolor, pastel, pen and ink, and mixed media. When depicting American Indian subject matter, she often blends traditional Indian two-dimensional "flat" style with various contemporary styles. Institutions holding her works include the Smithsonian Institution in Washington, D.C., the Heard Museum in Phoenix, Bacone College and the Five Civilized Tribes Museum in Muskogee, the Museum of Northern Arizona in Flagstaff, the Museum of New Mexico in Santa Fe, and the Philbrook Museum of Art in Tulsa. In 1974 the Five Civilized Tribes Museum designated her a Master Artist, the first woman to be so honored. By 2001 Hill had accumulated 270 awards for her paintings, making her the most honored American Indian woman artist in the United States. She served on the Governor's Commission on the Status of Women (1990) and as a commissioner on the U.S. Indian Arts and Crafts Board (2001). The Philbrook awarded her the Waite Phillips Special Artists Trophy for lifetime achievement, the Smithsonian Institution designated her one of the People of the Century, and she received the Academia Italia's (Cremona) Oscar D'Italia Award in 1985. She resided in Muskogee at the time of her death on June 16, 2020.

The following (as per The Chicago Manual of Style, 17th edition) is the preferred citation for articles:
Dianna Everett, “Hill, Joan,” The Encyclopedia of Oklahoma History and Culture, https://www.okhistory.org/publications/enc/entry.php?entry=HI022.