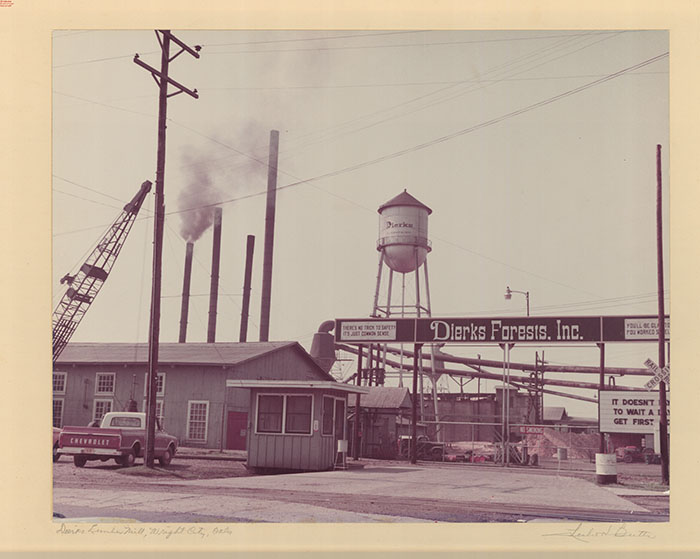 In eastern Indian Territory the timber industry emerged gradually in the late nineteenth century, stimulating a new kind of small urban center, the lumber mill town. Prior to the railroads' construction into Indian Territory in the 1870s and 1880s, sawmills were small and satisfied local needs for milled lumber for houses and barns. In 1872 as the Missouri, Kansas and Texas Railway (MK&T) invaded the future eastern Oklahoma, sawmills multiplied along its path. Stringtown and Atoka in the Choctaw Nation essentially became mill towns. Wagonloads of logs flowed into the towns from the Ouachita Mountains. As railroad construction diminished, Choctaw timber was shipped to Dallas, Texas, and Kansas City, Kansas, transported by the MK&T. Beginning in 1871 the Choctaw Nation tried to take a stronger stand to protect forest resources by passing a series of regulatory laws. They set royalty payments for the export of lumber and ties, authorized agents that were allowed to sell to railroads (1873), prohibited "Negroes" from selling timber to noncitizens (1877), expanded the law to apply to all Choctaw citizens (1878), raised the royalty amounts (1882), and classified sawed ties into categories requiring specific royalty payments.

At the beginning of the twentieth century, as the allotment process took land from the Choctaw Nation and put it into private hands, corporations began acquiring timber lands. Foremost among these was the Dierks brothers' Choctaw Lumber Company. However, independents and small companies dotted the backwoods, using steam and, later, gasoline-powered sawmills to process the cut logs. Few workers and, therefore, small camps were needed for these operations. However, as demand increased, the early steam-driven mills incorporated a more permanent camp and, depending on the size and production of the mill, could support up to twenty households, a bunkhouse for single men, a cookhouse, and a small store. Later, gas sawmills needed less labor and therefore maintained fewer families and had less permanent housing.

The larger timber corporations created actual "company towns," very similar to mining towns. Some paid workers in scrip to be used at the company-owned commissary. Mill workers' lives were pretty well controlled, from living in the company's dwellings and boarding houses to patronizing its restaurants and entertainment venues, attending its sponsored dances, and taking part in its baseball teams. The corporation would centrally locate a town to take advantage of as much timber as possible. They would also send out groups to cut distant trees and, if a railroad spur did not reach that area, would use a skid (log or metal rails that cut logs could slide on) and/or a skidder (a power-driven system of cables or blocks) to move the cut product to its transportation.

As the Dierks brothers built a railroad into southeastern Oklahoma, they founded towns such as Broken Bow and Bismark (later Wright City) as mill towns to support various aspects of the business. In 1927 the company ambitiously established Pine Valley in Le Flore County, one of the largest lumber towns in the American South. Pine Valley offered a large hotel, general store, drugstore, post office, barbershop, doctor, school, boarding house, movie house, ice plant, jail, churches, and over one hundred houses. There was even a segregated section for African American workers. In the early 1900s Dierks also had mobile company towns consisting of entire buildings that were transported into an area on railroad cars, unloaded to serve the workers while they cut all of the surrounding timber, and then loaded back onto the railroad cars and moved to a new location. These towns, such as Clebit, could have as many as two hundred homes and businesses.

The Great Depression, which inflicted financial damage on most industries, did not spare the lumber business. Around 1932 the Buschow Lumber Company closed their mill in Stapp. The Dierks brothers closed all their mills except Pine Valley, and in 1932 their three entities, Dierks Lumber and Coal Company (Arkansas), Choctaw Lumber Company, and Pine Valley Lumber Company fell into bankruptcy. In 1936 the three consolidated, upon approval of the federal government, into the Dierks Lumber and Coal Company. With an upturn in the U.S. economy, they reopened most of their mills. In 1941, after cutting all the usable area timber, the corporation began slowly shutting down Pine Valley, leaving Dierks with only their Broken Bow and Wright City sawmills in Oklahoma.

In the 1940s organized labor and the Committee for Industrial Organization (CIO) began organizing lumber industry employees. Dierks workers at Wright City, Clebit, and Broken Bow held a two-month-long strike in 1947 and won an eight-cent-per-hour pay increase. In 1955 workers in mills and logging camps in Wright City, Broken Bow, Clebit, and Blakely picketed Dierks for six months before calling off the unsuccessful strike. In 1969 Weyerhauser purchased all of Dierks' interest in Oklahoma. In 1974 the Julian Lumber Company, with a main office in Rattan, began manufacturing posts and poles from raw timber. By 2000 the company had mills in Broken Bow, Talihina, and Nashoba.

In 1919 fifty-six sawmills and planing mills existed in Oklahoma, and this figure rose to ninety-five in 1929. In 1937 the three Dierks' mills produced 60 percent of the lumber, although there were sixty-nine portable mills operating in the state. In 2000 Georgia Pacific also had a sawmill in Idabel, among its other Oklahoma forestry-related enterprises. In 2004 Weyerhauser employed eleven hundred and operated the largest sawmill (Wright City) east of the Rocky Mountains. Broken Bow and Wright City have continued to be Oklahoma's lumber industry leaders.

Sandra Faiman-Silva, Choctaws at the Crossroads: The Political Economy of Class and Culture in the Oklahoma Timber Region (Lincoln: University of Nebraska Press, 1997).

The following (as per The Chicago Manual of Style, 17th edition) is the preferred citation for articles:
Larry O'Dell, “Mill Towns (Lumber),” The Encyclopedia of Oklahoma History and Culture, https://www.okhistory.org/publications/enc/entry.php?entry=MI028.