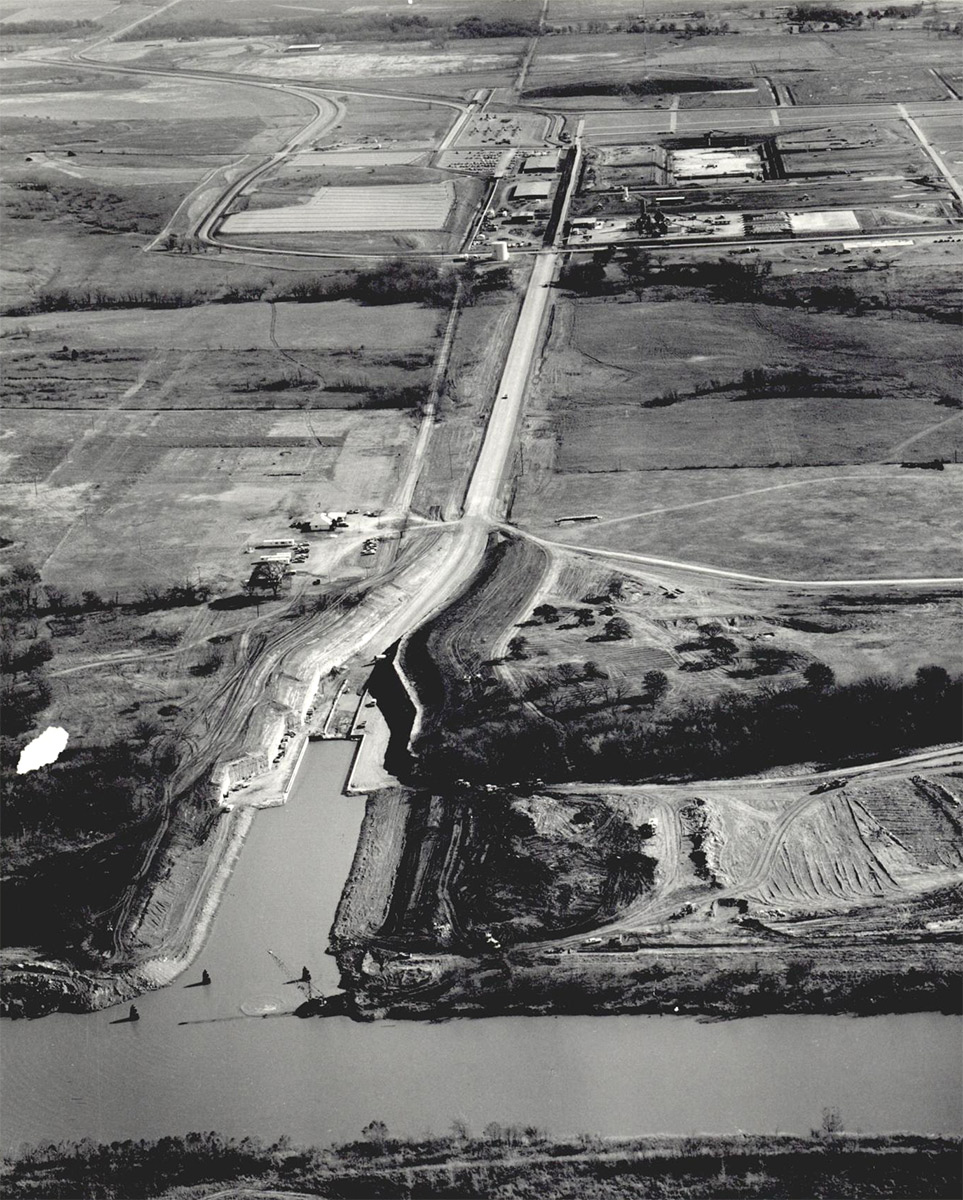 The Atomic Energy Act of 1954 ended the U.S. government's control over nuclear technology, allowing individuals and companies to expand into the market. In Oklahoma this industry was not based on the state's natural resources, but in the 1950s uranium was discovered (mainly in southwestern Oklahoma), and some entrepreneurs mined it. Most of Oklahoma's nuclear energy history revolves around a homegrown corporation. On May 8, 1952, the Kerr-McGee Company purchased the Navajo Uranium Company in Arizona, diversifying the conglomerate and bringing it into the nuclear age. The first oil company involved in uranium prospecting, Kerr-McGee soon built a processing mill near Shiprock, New Mexico.

By 1956 the company had organized Kermac Nuclear Fuels Corporation, owned almost 25 percent of the nation's uranium reserves, and had purchased a refinery in Cushing, Oklahoma, which they later used to produce nuclear reactor fuel materials. In 1965 the Cushing plant received a large government contract to process thorium into briquets to be used as fuel in reactors. In 1966 the first of several tragedies occurred at Cushing when an explosion killed one employee and injured two others. In 1965 Kerr-McGee completed its Cimarron Nuclear Fuel Facility near Crescent and in 1966 decommissioned the Cushing plant. The Crescent establishment converted uranium into fuel elements for nuclear reactors, and in 1969 the company announced it would build an adjacent plutonium plant, processing the man-made metal into fuel for nuclear-powered electrical generating plants.

At this time Kerr-McGee had almost completed its Sequoyah County facility near Gore. The plant converted uranium concentrate into uranium hexaflouride, which would be shipped to Crescent for further processing. In 1987 the Sequoyah plant expanded its operations, producing uranium tetraflouride, a component in the production of armor-piercing shells. With these three factories Oklahoma stood in the forefront of the emerging nuclear industry.

Other nuclear-related enterprises developed in the Sooner State. Both Oklahoma State University (1957) and the University of Oklahoma (1958) hosted small research reactors to study and teach nuclear engineering. From 1958 to 1970 near Tulsa the Kaiser Aluminum Company smelted magnesium and thorium metal alloys, extracting the magnesium and disposing of the radioactive material. In Muskogee from 1958 to 1989 Fansteel Metals produced tantalum and columbium metals, which contain trace amounts of thorium and uranium. In 1976 Eagle-Picher Industries in Ottawa County received a contract from the Energy Research and Development Administration (ERDA) to produce boron 10, which is used in nuclear research and production programs. In 1973 the Public Service Company of Oklahoma (PSO) announced plans to build two nuclear reactors near Inola.

In 1974 Karen Silkwood, an employee at Kerr-McGee's Cimarron plant, died in a mysterious car accident prior to a meeting with a New York Times reporter and a national representative of the Oil, Chemical, and Atomic Workers Union (OCAW). She reportedly was going to give the journalist evidence that Kerr-McGee workers tampered with fuel rods to hide their deficiencies, as well as report on the plant's safety violations. She was contaminated by radiation, but the company charged that she had contaminated herself. In 1976 Silkwood's estate filed suit against the company. Although in 1979 the federal court awarded the estate $500,500 for property and injury damage and $10 million in punitive damages, after a long process of appeals and legal maneuvering the case was finally settled out of court in 1986, with Kerr-McGee paying the estate $1.38 million. Karen Silkwood became a national symbol for antinuclear protesters and the basis for the 1983 movie Silkwood.

In Oklahoma, activists including Carrie Dickerson, Ilene Younghein, and the umbrella organization the Sunbelt Alliance, successfully fought PSO's proposed reactor, which the company had named the Black Fox Nuclear Power Plant. In 1982 PSO discontinued the construction of the reactors. Protests, funding problems, and the 1979 incident at the Three Mile Island Nuclear Plant in Pennsylvania contributed to the decision. In 1986 an accident at Kerr-McGee's plant near Gore killed one worker, sent eighty-two people to the hospital, and spread a large, tainted cloud over the area. The Cimarron plants permanently shut down in 1976, and in 1988 Kerr-McGee sold the Gore facility to General Atomics. After continuing difficulties and incidents the Gore plant closed in 1993.

At the end of the twentieth century no nuclear-related plants existed in Oklahoma. The federal government offered incentives to American Indians to store nuclear waste on tribal lands. None of the Oklahoma nations have accepted, but the Tonkawas had a close vote (58 to 44) before rejecting the offer in 1994. In 1983 Oklahoma joined Nebraska, Kansas, Louisiana, and Arkansas forming the Central Interstate Low-Level Radioactive Waste Compact to identify and to develop a storage site for the members. In 1989 the organization selected a site in Nebraska, but in 1999 Nebraska rejected the proposal and withdrew from the compact. At the turn of the twenty-first century the Nuclear Regulatory Commission (NRC) had listed several radioactive waste sites in Oklahoma that it was in the process of decommissioning: the site near Gore, Kerr-McGee's facilities at Crescent and Cushing, Fansteel near Muskogee, and Kaiser Aluminum at Tulsa. Although there are no reactors active in the state (OSU's closed in the 1970s and OU's in the 1980s), activists were still vigilant, objecting to a proposed route that would bring nuclear waste through Oklahoma to Nevada.

The following (as per The Chicago Manual of Style, 17th edition) is the preferred citation for articles:
Larry O'Dell, “Nuclear Power,” The Encyclopedia of Oklahoma History and Culture, https://www.okhistory.org/publications/enc/entry.php?entry=NU001.