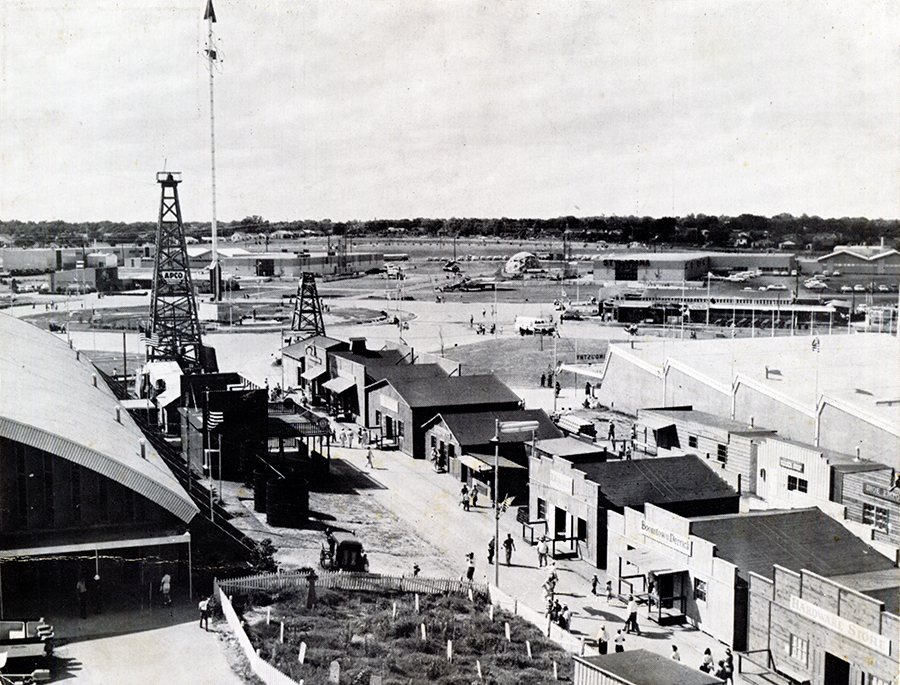 The culture of the petroleum industry is similar to that of any other extractive industry that depends upon the removal of valuable minerals from the earth, but it has its own particular characteristics. Due to the finite amount of petroleum available, its finding and removal is the source of significant and immediate wealth, which creates an intense desire to capitalize on a discovery as rapidly as possible. The situation creates a mobile and transient work force that defines the industry and those who work within it. During the twentieth century's first three or four decades Oklahoma became a major petroleum-producing region and provides an excellent example of the emerging oil-field culture.

Between 1901 and 1905 northeastern Oklahoma experienced three major oil discoveries as a harbinger of the many to follow. There were no experienced oil-field workers in the region, and thousands flocked there from the oil-producing areas of West Virginia, Pennsylvania, and Ohio. The demand for labor was so overwhelming and the pay so lucrative that local rural workers were irresistibly attracted to oil-field work, which was physically demanding but no more so than the farm labor they were leaving. This influx of rural labor set the tone for numerous idiomatic terms peculiar to the oil fraternity. For example, a worker new to the oil fields was called a "boll weevil," a term still used, but in recent years it has metamorphosed into "worm." The oil field became the "oil patch" because the only fields these new workers knew were southern field-crop terms such as "cotton patch." Similarly, the pronunciation of the word "tour," as "tower," referring to the work shift or tour on a drilling rig, probably derived from the workers' unfamiliarity with the term, which they pronounced like the familiar word "sour."

This mass of humanity was extremely egalitarian, believing that anybody who got lucky could be the next oil baron. But there was a certain hierarchy, beginning at the top with the wealthy entrepreneurs who promoted oil-field development. Below them were those who worked for the large oil companies or the "majors," and just below them were those who worked for the smaller oil companies or the "independents." Then came the mass of workers hired by the contractors to do the bulk of the actual work, such as drilling, pipelining, tank building, freighting, and myriad other jobs. This group had its own hierarchy that began with the bosses and worked its way down through the hands. Although subject to great overlap and blurring of lines, the generalization of management, company men, and contractors fairly well defines the social structure within the oil fraternity.

Within the group of "oil-field hands," as the workers call themselves, there are numerous specialized designations. For example, on a cable-tool drilling rig the two-man crew consists of a "driller," who is in charge, and his helper, called a "tool dresser" or "toolie." However, on a rotary drilling rig the four- or five-man crew are collectively called "roughnecks" and consist of a "driller," who is in charge of the "floor hands," the "derrick man," and the "motor man." General labor in the oil field is done by the "roustabouts," who are supervised by a "pusher" or "gang pusher." Similarly, other types of oil-field work have their own descriptive vocabularies, and the whole makes up the body of specialized language associated with the industry.

The discovery of a new oil field and the resulting rush to the area is termed an oil boom, and the affected towns within the oil boom area are termed oil-boom towns. The term "boom" seems to be almost peculiar to the oil industry when compared to similar situations in which precious metals are sought, such as a "gold rush" or a "silver strike." However, the stereotypical oil-boom towns that developed during the first three decades of the twentieth century had many of the same characteristics of the gold- and silver-rush towns. Oil booms tended to last only one to three years during the initial drilling and production frenzy, usually termed the "flush production" period, and they caused such an influx of population as to create social chaos. The boom was characterized by a lack of municipal services and a generally lawless atmosphere. This has become the stereotypical view of oil discoveries, a vision that was forever fixed in the public mind by the 1940 movie Boomtown, starring Clark Gable, Spencer Tracy, and Claudet Colbert and reinforced by other Hollywood productions such as Tulsa and Oklahoma Crude.

However, boomtowns varied significantly, depending on their status prior to oil discovery. Existing towns that had a municipal government and established law enforcement prior to the boom generally managed to generate a degree of control over the situation, but those established in the oil fields in the midst of a boom's chaos generally lost control to the lawless element. The latter have provided the lasting, negative impression of a boomtown. Interestingly, with the passing of the initial boom, older communities that served several oil pools reestablished their stable status and thrived, but most of the new towns established near a small discovery faded from the scene.

Those who filled the boomtowns day and night and contributed to the oil-field workers' tough reputation were primarily single men working for the contractors. They were the ones who came in, drilled the wells, hauled the supplies, laid the pipelines, and then moved on to the next boom. They lived in rooming houses or some sort of temporary structure, ate at the numerous chili parlors, hamburger stands, or makeshift cafés, and played at the gambling houses, gin mills, and houses of prostitution that proliferated. Many of these hands, fresh from their rural homes, had grown up with very little money, and their recreation had consisted of an occasional Saturday night in the local town. Oil-field jobs brought good wages and turned every night into a Saturday night on the town. For many of those who stayed with the work and followed the booms, this became a way of life, and their reckless activities became the hallmark of the oil-field worker.

As the boom subsided and the contractors and their workers moved out, the "majors" and "independents" began to produce the field, and the chaos abated. The oil companies brought in workers who were a much more stable group and who tended to be family oriented. Some of them settled in the towns, but housing was always a problem. With no houses available so far from towns, the companies faced a serious dilemma. They solved it by building camps in the midst of the oil field.

A typical oil-company camp built by a major might contain a dozen or even more than one hundred houses. These were usually identical three-room or four-room buildings painted in company colors and arranged in neat rows. Employees paid a small fee, less than ten dollars per month, to offset the cost of utilities, garbage collection, and general maintenance. A larger camp was a self-contained community with baseball teams, club activities, and company-maintained parks, and some even had their own schools. The independents generally could not afford to build large camps, but they provided certain workers with "lease houses." These were similar to camp houses, but usually there was usually only one to a lease, and in it the "pumper" (the man who maintained that lease) lived with his family. Until the late 1940s the oil fields were dotted with lease houses along with the occasional camp.

By the 1950s good roads and better automobiles changed much of the way life in the oil field. With employees able to travel greater distances, oil companies dismantled the camps, and workers moved to town. In most cases the families were given the opportunity to buy the homes they had lived in for years and move them to a new location, but the camaraderie of the camp life was gone forever. By this time mobile homes had become so efficient that many of the drilling crews began to live in them, and when a new boom developed, they simply moved their home to the new location. The old boarding houses and crowded conditions gave way to a landscape dotted with trailer parks in the area of a new oil discovery. The giant booms ended in the 1930s, but there are still new discoveries, and there are still oil-field workers eager to follow them, with the same attitudes but in a different technological world.

Mody C. Boatright and William A. Owens, Tales From the Derrick Floor: A People's History of the Oil Industry (Garden City, N.Y.: Doubleday, 1970).

The following (as per The Chicago Manual of Style, 17th edition) is the preferred citation for articles:
Bobby D. Weaver, “Oil-field Culture,” The Encyclopedia of Oklahoma History and Culture, https://www.okhistory.org/publications/enc/entry.php?entry=OI003.