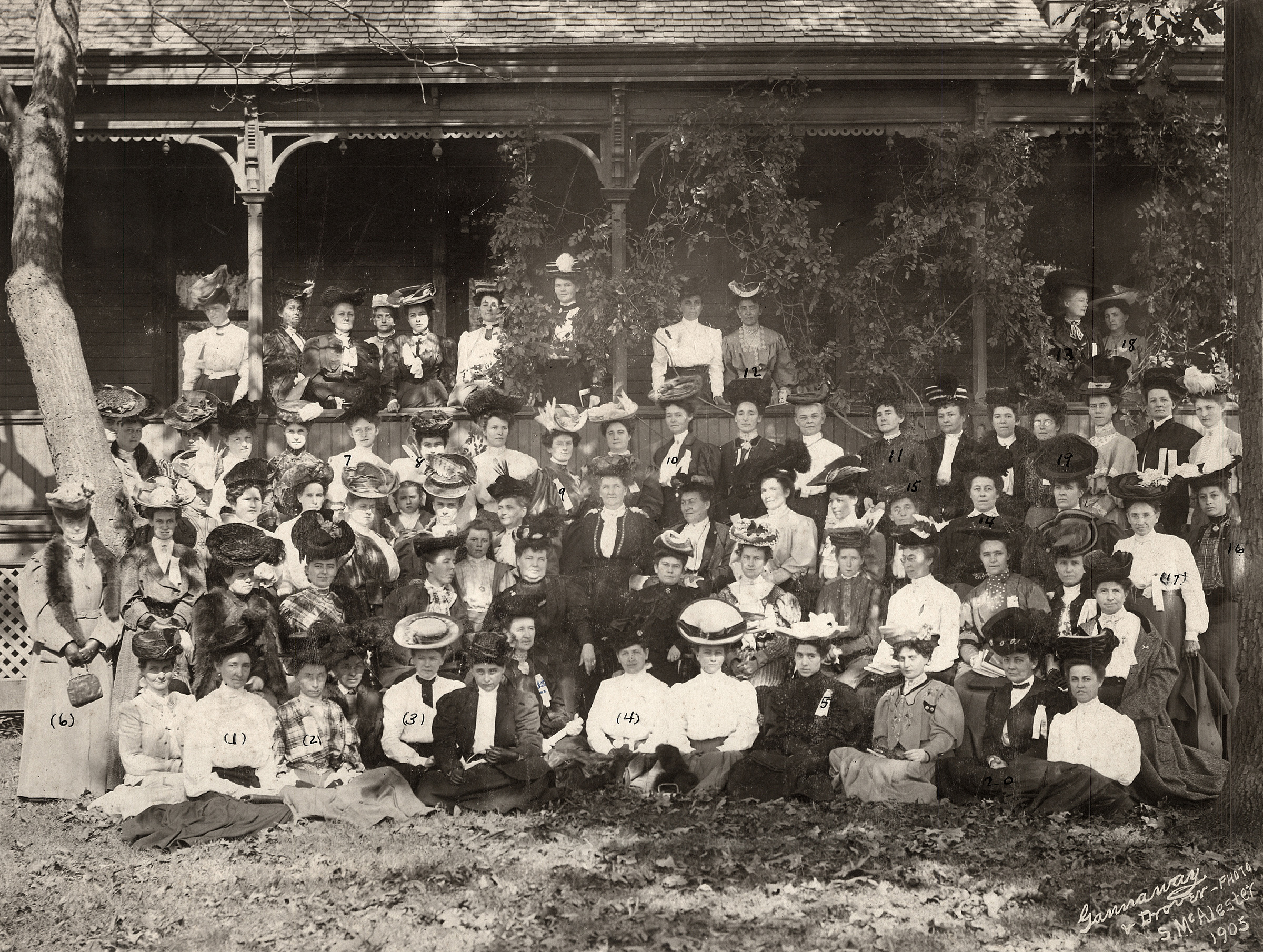 During the Progressive Era Americans endeavored to reform society's problems. Consequently, women formed volunteer clubs for self-improvement and for community service. In 1890 representatives of sixty women's clubs from across the United States met in New York City and formed an umbrella organization known as the General Federation of Women's Clubs (GFWC). Club members worked together to create public libraries, to lobby for the enactment of pure food and drug and child labor laws, and for the improvement of public education and the juvenile justice system.

Oklahoma Territory (O.T.) women formed clubs during the Territorial Era after each of the land openings. Apparently, the first women's club in O.T., the Chautauqua Literary and Scientific Club of Guthrie, was established in 1890; the Philomathea Club of Oklahoma City was established on October 27, 1891. The Atoka Pioneer Club, founded in 1896, was the first women's club in Indian Territory (I.T.). In May 1898 Sophia Julia Douglas, a member of the Philomathea Club, made a call to territorial women's clubs to federate. Twenty-four women representing eleven clubs with two hundred members met at the Presbyterian Church in Oklahoma City on May 24–25, 1898, and founded the Federation of Women's Clubs for Oklahoma and Indian Territories. Douglas served as the first president. The Oklahoma federation joined the GFWC on May 30, 1898. Within one year the number of clubs had doubled. They selected "Kindliness and Helpfulness" as their motto and formed standing committees on art, literature, civics, and education. By 1903 the committees had increased from four to twenty to include music, philanthropy, legislation, home and domestic science, and forestry. Membership stood at 1,675.

In December 1903 ten clubs from I.T. decided to withdraw from the Oklahoma federation. Seven other clubs soon followed. Most of the members were of American Indian descent who desired to have clubs in which they were in the majority. Czarina C. Conlan of Atoka served as the first president of the Federation of Women's Clubs of Indian Territory, which was admitted to the GFWC on January 27, 1904.

In 1906 Judith C. Horton founded the Excelsior Club in Guthrie, the first African American women's club in O.T. The East Side Culture Club of Oklahoma City organized in 1907 with Harriet Price Jacobson serving as president. This club issued the call to form a state federation. Consequently, on April 16, 1910, African American women met at the Avery Chapel A.M.E. Church in Oklahoma City and formed the Oklahoma Federation of Negro Women's Clubs. In 1921 the name became the Oklahoma Federation of Colored Women's Clubs. The OFCWC sponsored a home for delinquent African American girls in Tulsa. The biennial meeting of the National Association of Colored Women's Clubs convened at Oklahoma City in 1941 and 1994. The number of communities reporting active federated clubs rose from seven in 1910 to ninety-six in 1956. The Sooner Woman kept African American women informed of state federation news. In 1992–93 Rubye Hall of Oklahoma City served as chair of the National Historical Research Committee and National Convention Chair for the 1994 biennial meeting. Segregated women's clubs continued into the twenty-first century.

Almost one year after 1907 statehood, on November 3, 1908, the Oklahoma and Indian territories women's clubs were united. Ninety-four O.T. clubs and fifty-six I.T. clubs with an estimated thirteen hundred members formed the Oklahoma State Federation of Women's Clubs and elected Frances F. Threadgill their first president. The Oklahoma federation was admitted to the GFWC on May 30, 1909. The state women's clubs were divided into five districts corresponding to the congressional districts. In 1923 the state was divided into nine districts. Early prominent members included Blanche Lucas, Annette Ross Hume, Dr. Winonah "Winnie" M. Sanger, Roberta Campbell Lawson, Lilah D. Lindsey, Lola Scott, and Myrtle McDougal. During the early 1900s the Oklahoma federation created a traveling library that served schools and communities before public libraries were established. The traveling library existed until 1919 when the federation persuaded the Oklahoma state legislature to create and fund the Oklahoma Library Commission. In 1909 the state federation set up the Frances F. Threadgill Educational Loan Fund, which helped girls continue their education. The interest earned from the Annette Ross Hume Endowment Fund, begun in 1915, provided funds for various club work.

Women's clubs' civic activities filled vital needs in urban areas. Club members helped establish city parks, kindergartens, hot lunch programs in the schools, and compulsory education legislation. Initially club women did not support the woman's suffrage movement; they believed that women involved in the suffrage movement were too militant and that association with them would detract from the work accomplished by club women. However, by 1914 club women's attitudes changed, and they supported woman's suffrage. In the 1920s Oklahoma City club women favored keeping dance halls opened for the entertainment of young people as long as there was adult supervision. Oklahoma club women raised money to construct a community house for the Oklahoma Industrial Institute and College for Girls at Tecumseh in 1922. In 1928 Oklahoma club women advocated the construction of the State Historical Building in Oklahoma City. By the 1930s the Oklahoma federation had helped establish seventy-seven public libraries as well as the library on Oklahoma State University campus. During World Wars I and II club members were involved in Red Cross work, campaigns for the sale of war bonds and stamps, the collection of scrap metal and household grease, and preservation of home resources. In anticipation of the semicentennial of statehood in 1957 club women raised money for their projects by selling tickets to the Semi-Centennial Exposition in Oklahoma City. They also worked on community committees to plan parades and festivals to celebrate fifty years of statehood.

Club membership peaked in 1942 with 376 clubs and 8,687 members. By 1950 the state federation had 350 units with approximately 7,500 members. Membership waned in later years as more women worked outside the home and as state and federal governments enacted laws and created agencies to regulate labor, natural resources, food, and drugs. During the early 1980s Oklahoma had 202 clubs with 5,174 members. At the turn of the twenty-first century the GFWC had 6,500 clubs in the United States and more than one million members worldwide. Oklahoma had 1,222 dues-paying members who belonged to fifty-eight clubs. Oklahoma clubs also had honorary or life members who no longer paid dues, of which no record was kept. Two Oklahoma women have served as president of the GFWC. Roberta Campbell Lawson was president from 1935 to 1938, and Katie Freeman Ozbirn served from 1960 to 1962.

The following (as per The Chicago Manual of Style, 17th edition) is the preferred citation for articles:
Linda D. Wilson, “Oklahoma Federation of Women's Clubs,” The Encyclopedia of Oklahoma History and Culture, https://www.okhistory.org/publications/enc/entry.php?entry=OK046.