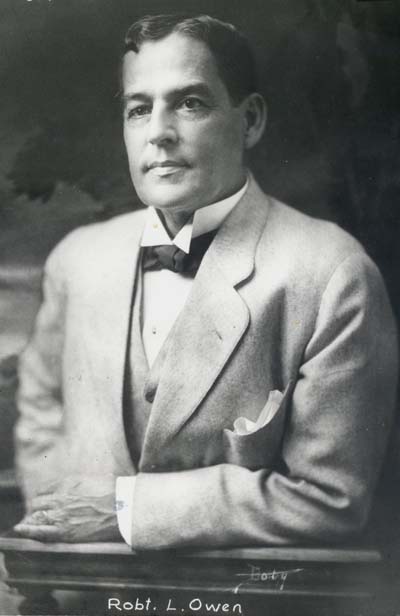 A successful attorney in Indian Territory (I.T.) and a prominent U.S. senator, Robert Latham Owen, Jr., was born on February 2, 1856, in Lynchburg, Virginia, the son of Robert Latham Owen, Sr., a railroad president, and Narcissa Chisholm, part Cherokee and originally from I.T. Owen attended preparatory schools in Lynchburg and in Baltimore, Maryland, and college at Washington and Lee University, earning a master's degree in 1877. Two years later, following the untimely death of his father, Owen and his mother moved to I.T., and he became the principal teacher in the Cherokee Orphan Asylum at Salina, and after eighteen months, secretary of the Cherokee Board of Education.

During the early 1880s Owen studied law, passed the bar, edited the Vinita Indian Chieftain for several months, and presided over the Indian International Fair at Muskogee. Demonstrating shrewd understanding of expanding economic opportunities, he unsuccessfully attempted to rent 250,000 acres of grazing land in the Cherokee Outlet. He did successfully acquire an oil lease for the entire Cherokee Nation, though no producing well was drilled before the rights expired.

In 1885 officials appointed Owen to head the Union Agency overseeing the Five Tribes. In his four-year tenure he dealt steadfastly with white intruders, citizenship disputes, and political controversies among tribal factions. During his last two years as agent he also used his position to personal advantage, injecting himself into the debate over re-leasing the Cherokee Outlet and taking sides in a controversial townsite dispute in Wagoner. He also purchased a ranch in the northwestern corner of the Cherokee Nation.

From 1889 to 1907 Owen primarily practiced law in Indian Territory, frequently handling important cases for the Five Tribes. In 1893 he helped sixty Cherokees locate quarter-section claims in the Cherokee Outlet prior to the land run there. He also played a major role in acquiring compensation for the Choctaws and Chickasaws for their residual claims to lands in western Oklahoma. In the early 1900s he took up the cause of other Cherokees, helping them gain millions of dollars in the "Eastern Cherokee" case and reportedly drawing $160,000 in lawyer's fees for himself.

When the Dawes Commission finalized the allotment agreements with the Five Tribes at the turn of the twentieth century, Owen undertook several controversial speculative ventures. In the Cherokee Nation, he induced dozens of his illiterate fellow tribesmen to take their surplus allotments on his ranch and then acquired long-term leases from them for very little money. In the Creek Nation, his Indian Land and Trust Company made rental contracts so suspect that the U.S. Department of the Interior filed suit to invalidate them. In his hometown of Muskogee he purchased several town lots at a fraction of their value. In addition, he and his representatives made questionable contracts with Mississippi Choctaws who were entitled to move to Oklahoma and take allotments.

As statehood approached, Owen turned his attention to politics. As committee person for the Democratic Party, he represented Indian Territory at the national conventions in 1892 and 1896. Throughout the 1890s and early 1900s he organized meetings to discuss statehood for Indian Territory separate from Oklahoma Territory and played a major role in the Sequoyah Convention in 1905. The next year he lobbied for both woman suffrage and prohibition at the Oklahoma Constitutional Convention in Guthrie. In 1907 he announced his candidacy for the U.S. Senate, campaigning on the popular opposition to monopolies and trusts and promising to push for removal of restrictions on the sale of Indian lands. He won the nonbinding preferential primary held by the Democrats, and the state legislature officially elected him late in 1907, along with Thomas P. Gore of Lawton.

In 1908 Owen helped pass the Removal of Restrictions Act, making thousands of Indian allotments available for sale in Oklahoma. As senator he consistently protected the economic interests of a majority of his constituents, including those in the oil industry. On national issues he spoke frequently and passionately against special interests and supported presidential candidate William Jennings Bryan in his "Let the People Rule" campaign of 1908. Owen also sided with so-called "Insurgent" Republicans, who later took the name "Progressives" in their struggle within their own party. In 1910, reflecting the reform mentality of the day, he introduced an unsuccessful bill to create a cabinet-level department of health, decades before the creation of a similar department.

In 1912, when self-styled progressive Democrat Woodrow Wilson won the presidency, the newly reelected Owen began taking a major role in legislation. Most significant, as chair of the committee on banking and currency, he cosponsored the Federal Reserve Act, arguably the most important banking legislation of the twentieth century. Owen considered this law his crowning achievement as senator, and other politicians and his constituents agreed. The Keating-Owen Child Labor Law of 1916 also reflected his effectiveness.

When the United States joined the conflict raging in Europe in 1917, Owen proved to be one of the staunchest senatorial allies of Wilson and the war. He also supported Wilson's League of Nations in 1919, working to effect a compromise, but the Senate rejected those efforts. Following the war, Owen's influence waned with the Republican ascendancy. In 1923 he shocked many of his constituents by announcing that a Russian-French conspiracy had actually caused the Great War. He declined reelection in 1925 after three terms.

In retirement Owen remained in Washington, D.C., as a lawyer-lobbyist and frequent commentator on public events. In 1928 he became the first nationally prominent Democrat to bolt in favor of Herbert Hoover, but he returned to his party after the election of Franklin D. Roosevelt in 1932. During the Great Depression Owen advocated various schemes to bring about inflation to stimulate the economy, and he criticized Federal Reserve policies. Following World War II, blind and in failing health, Owen invented an international alphabet that he hoped would be used by diplomats. He died of complications from prostate surgery on July 19, 1947, and was mourned as the state's most influential national figure in the early statehood era.

The following (as per The Chicago Manual of Style, 17th edition) is the preferred citation for articles:
Kenny L. Brown, “Owen, Robert Latham,” The Encyclopedia of Oklahoma History and Culture, https://www.okhistory.org/publications/enc/entry.php?entry=OW003.