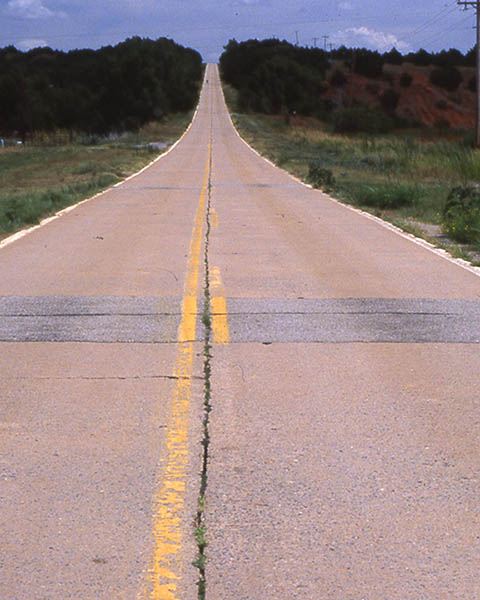 U.S. Highway 66 both shaped and reflected the transformation of Oklahoma in the twentieth century as it became arguably the most popular, and certainly one of the most important, roads in the nation. For four decades after 1926 the highway unleashed forces of change everywhere it touched. It evolved into a familiar icon of life that still symbolizes times of both hardship and hopefulness for Americans and Oklahomans.

Responding to pressure from state highway commissions, the U.S. Bureau of Public Roads in 1926 announced a new highway system for the nation that, using existing roadways, formed a grid of even-numbered east-west roads and odd-numbered north-south roads. One road stood out, because the highway that was designated 66 (after significant wrangling and argument) actually represented something of a diagonal in part of its course. Reaching southwest from Chicago, this distinctive road went to St. Louis, then through Missouri to Joplin, clipped the corner of Kansas, and then went to Oklahoma City on one strand of the Ozark Trail Highway's web of roads. Highway 66 zigzagged along section lines and railroad right-of-way from Quapaw to Commerce, to Miami, Afton, Vinita, Chelsea, Claremore, Catoosa, Tulsa, Sapulpa, Kellyville, Bristow, Depew, Stroud, Davenport, Chandler, Wellston, Luther, Arcadia, Edmond, and Oklahoma City. At Oklahoma City the newly designated U.S. 66 followed the old Postal Highway to Yukon, El Reno, Calumet, Geary, Bridgeport, Hydro, Weatherford, Clinton, Foss, Canute, Elk City, Sayre, Erick, and Texola and from there to Amarillo and beyond through New Mexico, Arizona, and California to Los Angeles.

Highway 66 began inauspiciously, with just a fraction of its length paved, but it soon took on some of the powerful dimensions that would make it important in Oklahoma and American history. The Highway 66 Association, seeking to attract traffic to the route, contrived a transcontinental foot race along Highway 66 in 1928. As it turned out, the race, called the "Bunion Derby," was won by Foyil, Oklahoma, native Andy Payne. The sponsor also placed advertisements in the national press informing the public of this supposedly "all-weather" route to the West Coast.

But the primary stimulus to traffic along the highway came less from the efforts of its promoters than from fundamental social forces. Already in the 1920s a population shift was underway from farm to town and from Oklahoma westward, and that shift turned into a vast migration of the dispossessed in the Depression years. Indelibly associated with images of crowded families and all their possessions heaped into jalopies and trucks bound for California, Highway 66 signified, as John Steinbeck famously proclaimed, "the road of flight." The highway that started out in the hopeful words of its patrons as "the Main Street of America" had taken an unexpected turn.

Yet that route, carrying hordes of people out of Oklahoma, also enabled many others to stay. Highway 66 nourished a multitude of low-capital businesses, the small mom-and-pop operations that found a toehold along the road in the form of gasoline stations, tourist courts, and diners. With a steady stream of traffic to draw upon, these businesses provided a modest living to people only a few dollars away from the plight of those who passed their doors and thereby also made travel easier for everyone heading west. As more and more people traveled Highway 66, though, the greater the need seemed for roads that were paved, wider, and straighter. When the Hoover and Roosevelt administrations pumped money into road building, Highway 66 in Oklahoma was a prime beneficiary, as were the unemployed people who found work building those roads and the communities where they lived and shopped. In 1937 Governor E. W. Marland dedicated a stretch of highway west of Miami that made U.S. 66 completely paved in the state. The volume of traffic soared even more; Sayre and El Reno built tunnels under the highway to allow pedestrians safely to cross the heavy traffic.

The improvement of the road, however, held subtle consequences for Oklahomans. As the highway became faster, it also became straighter. Sharp corners were replaced with sweeping arcs across the countryside. Meandering loops through major cities and linking small towns were replaced with dramatically shorter cutoffs that reduced travel time but also left the owners of roadside businesses and even entire towns far removed from the flow of traffic. When a bypass was completed to shorten Highway 66 near Wellston in 1933, the town's citizens, watching the traffic speed past a half-mile to the south, felt betrayed by their public officials in an enduring enmity. The towns of Geary and Calumet suffered when a 1934 bypass from El Reno to Hydro took traffic away. The same new alignment sidestepped Bridgeport, and within a few years it was virtually a ghost town. All along the route of Highway 66 the pattern unfolded. As increased traffic brought increased business, it also brought new roads, and as those roads were modernized, they left behind many who had depended on 66.

If the Depression had a double-edged impact on Highway 66, so did World War II. Private traffic declined as a result of travel restrictions, but war-related traffic surged with new installations at Miami, Tulsa, Oklahoma City, and Clinton, a string of defense plants and bases situated in part because of their proximity to this strategic roadway. The trucking industry that had emerged during the 1930s as a competitor to the railroads began to consolidate its position even more, with Highway 66 a critical cross-country route. Maintenance of that highway, as with other highways in the state, however, languished during the war years.

U.S. 66 took a familiar turn after the war when millions of Americans, experiencing a prosperity that had eluded them previously, took to the road, this time for leisure, and Nat "King" Cole encouraged people to get their kicks on Route 66. The nation's highways carried more traffic than ever before, and 66 more than most. That meant that the small businesses along the highway found new opportunities and small towns had a steady source of revenue. But it also meant that the pressure mounted to increase the capacity of the roadway, to straighten it, and to devise ways for travelers to cross the state without the bother of stop-and-go driving.

This was, in truth, a national problem, but it was addressed early in Oklahoma with the completion of the Turner Turnpike between Oklahoma City and Tulsa in 1953, over the strenuous objections of the communities along that stretch of Route 66, and the Will Rogers Turnpike between Tulsa and the Missouri line in 1957. In 1956, moreover, Congress created the Interstate Highway System. This new generation of roads was characterized by four-lane, divided roadways with controlled access. By 1970, when Interstate 40 in the western part of the state was complete, the volume of traffic had generally shifted from Route 66 to the interstates.

Yet in the years since 1985, when the road was decommissioned as a federal highway, Route 66, sometimes now a frontage road, sometimes a state highway, continues to attract people from around the world for different reasons. It appeals especially to those who seek to explore the places and lessons of Oklahoma's past.

The following (as per The Chicago Manual of Style, 17th edition) is the preferred citation for articles:
Michael Cassity, “Route 66,” The Encyclopedia of Oklahoma History and Culture, https://www.okhistory.org/publications/enc/entry.php?entry=RO037.