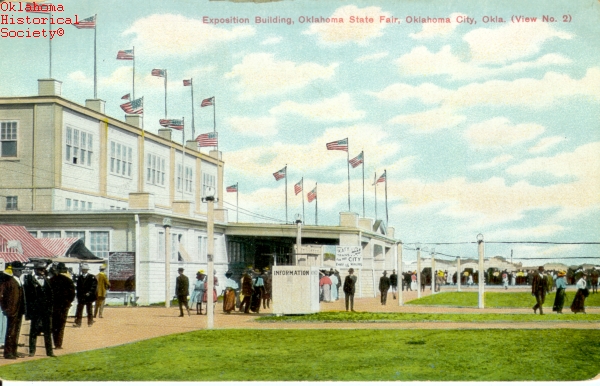 A tradition that can trace its roots to territorial days, the State Fair of Oklahoma in Oklahoma City attracts thousands to its fairgrounds every autumn. The first fairs in present Oklahoma occurred the eastern portion, or Indian Territory and, like most fairs, centered on agriculture. This served as an opportunity to educate American Indians on "modern" farming and provided a social occasion that pulled isolated rural residents to the urban setting. In western Oklahoma, after 1889 and the development of Oklahoma Territory, newcomers soon staged fairs and expositions. Oklahoma City held its first of these activities in 1889, five months after the Land Run. By 1892 Charles "Gristmill" Jones had spearheaded the Oklahoma Territorial Fair Association, which sponsored the Oklahoma Territorial Fair. Other influential Oklahoma City residents active in the association included Ed Overholser, William McClure, James Geary, H. G. Trosper, and D. F. Stiles. Under their direction the organization purchased a parcel of land and erected, among other structures, a half-mile horse racetrack. As the region's economy faltered and Oklahoma City's population declined, the fair discontinued after 1894. In 1898, as the agriculture markets improved, the city hosted a street fair, which was repeated in 1899. In 1902 Charles Colcord organized the "Oklahoma City Fair and Race Meeting."

Prior to statehood, in January 1907 Jones and Colcord led in the organization of a state fair association. The organization located a new fairgrounds on the city's east side and held the first State Fair of Oklahoma in early October, a month before official statehood day (November 16). Agriculture remained at the forefront, with prizes offered for crop and livestock competition, as well as several farming and ranching exhibits. Horse racing served as the biggest draw, and the grandstand at the half-mile track accommodated fifteen thousand fans for the Oklahoma Derby. The first fair also held the usual carnival attractions, including a midway and vaudeville acts. In November 1907 Henry Overholser arranged loans to pull the association out of debt and guided the organization through the next five years. During this period expansion and improvements abounded, including the construction of several buildings, new rides, telephone and electric connections, and a large Livestock and Horse Show Pavilion. In 1913 the state legislature banned gambling on horse races, souring one of the fair's popular attractions. However, the public's interest in automobiles and air flight was exploited as the fair held car races, sponsored hot air balloons, and beginning in 1912, offered air shows.

By 1917 the fair faced a steadily increasing debt and competition from the Muskogee State Fair, which the legislature had endorsed as the official state fair that year. To continue the Oklahoma City venue civic leaders proposed to sell the fairgrounds to the city, which would in return rent the grounds to the fair board for thirty days each fall. This was based on the "Dallas Plan," which the State Fair of Texas had been using since 1903. In May 1917 Oklahoma City voters approved a bond to fund the purchase. The fair slowly expanded and continued to provide patrons with agricultural education, entertainment, culinary treats, and glimpses of new technologies. In 1927 the fair board renegotiated its agreement and assumed maintenance responsibilities for the grounds, earning the profits from renting the facilities throughout the year.

The Great Depression took a toll on the association's budget and curtailed some of the bigger events, including car races. By the late 1930s a movement had emerged to place the fair in a different Oklahoma City location. The old site was deemed unsuitable because of frequent flooding, limited space, lack of parking, and proximity to the Oklahoma City oil field.

During World War II several state fairs, including that of Texas, closed, but Oklahoma's remained open except for the 1945 run. The wartime fair used the opportunity to educate the public, to raise civilian morale, and to exhibit the U.S. armed forces' equipment and prowess. The relocation plans became a reality in 1951, when the city acquired 440 acres in its western section to accommodate the venue. In 1954 the first fair held at the new fairgrounds attracted 416,000 visitors in a period of nine days. The move and the construction depleted the board's funds, and the subsequent two fairs lost money. By 1957 a weakened fair board allowed the city to take full control of the fairgrounds for all but one month of the year. Also in 1957, the Semi-Centennial Exposition was held at the fairgrounds from June 14 to July 7, in addition to the normal fall State Fair.

In 1962 the fair board elected Edward L. Gaylord as president and ushered in a new period of development. In the 1960s and early 1970s the board constructed several new buildings, including the Transportation Building, the Women's Building (later the Home Arts and Crafts Building), the Made in Oklahoma Building, and the Agricultural Building. The construction of the Fairgrounds Arena, which opened in 1965, proved the most significant, allowing rodeos, basketball and hockey games, and other entertainment to be staged in a comfortable environment. It also would be an off-season income producer. Other significant facilities opened during this period were the monorail, the space tower, and All Sports Stadium, which was home to the Oklahoma City 89ers baseball team.

In 1975 the fair's attendance eclipsed the one-million mark for the first time. The annual "school day" attracted thousands of students from across the state and has always been one of the busiest days. The State Fair continued as a successful institution through the twentieth century. Since 1917 the Oklahoma City residents have supported the fair through the political process, which continued with a portion of funds in the 1993 MAPS plan and with a hotel tax in 2004. This raised the Oklahoma City hotel tax 3.5 percent, with 3 percent of the increase tagged for fair improvements. In 2001 the name changed from the State Fair of Oklahoma to the Oklahoma State Fair, and in 2004 the length of the fair shortened from seventeen days to eleven.

Bob L. Blackburn and Paul B. Strasbaugh, A History of the State Fair of Oklahoma (Oklahoma City: Oklahoma Heritage Association, 1994).

The following (as per The Chicago Manual of Style, 17th edition) is the preferred citation for articles:
Larry O'Dell, “State Fair of Oklahoma,” The Encyclopedia of Oklahoma History and Culture, https://www.okhistory.org/publications/enc/entry.php?entry=ST021.