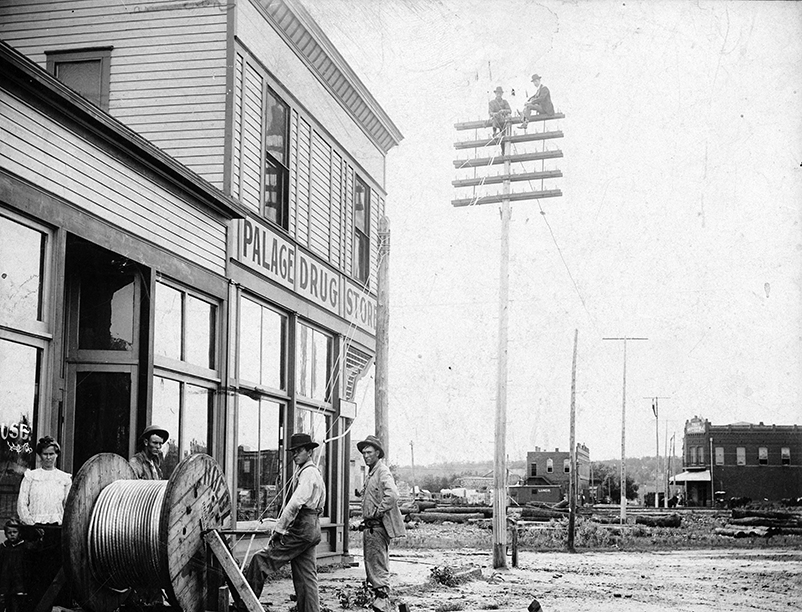 In 1876 Alexander Graham Bell was credited with inventing the telephone. By 1884 the U.S. Army had strung a telephone line between Fort Reno and Darlington, Indian Territory, although in 1879 or 1880 they had experimented with the process using existing telegraph lines that ran from Fort Sill to Fort Reno. In 1886 Indian Territory entrepreneurs, including Edward D. Hicks, Clarence W. Turner, John B. and James S. Stapler, Lucien B. Bell, and John Scott, extended a commercial telephone line from Tahlequah to Fort Gibson and on to Muskogee. There the headquarters existed at Turner's hardware store, and in Tahlequah the Stapler and Sons Hardware Store hosted the telephone line. In 1893 Guthrie and Oklahoma City constructed small exchanges.

The Pioneer company continued to expand, purchasing independent exchanges and allowing them to use Pioneer lines for intercity toll calls. In 1911 the Pioneer Telephone and Telegraph Company, the Missouri and Kansas Telephone Company, and the Bell Telephone Company of Missouri combined under one president, but each company kept its name and its own board of directors. In 1912 the Pioneer company had 115 exchanges in Oklahoma, with 114,975 miles of aerial wire and 19,480 miles of underground wire. In 1917 the three corporate entities and the Southwestern Telephone Company of Texas, Louisiana, and Arkansas, which had been added to the group by 1912, consolidated under one name, Southwestern Bell.

In 1977 the number of companies had consolidated to fifty-four. Southwestern Bell had 167 exchanges throughout the state, and General Telephone Company had fifty-three in southwestern and eastern Oklahoma and the Panhandle. Pioneer had forty-nine, most in western Oklahoma, and the Allied Telephone Company had twenty-four exchanges in western Oklahoma. In 1984 an antitrust suit broke up the AT&T Bell family, and Southwestern Bell formed as an independent company. Mergers and acquisitions continued as Pioneer, Southwestern Bell, and GTE continued to buy or sometimes even switch exchanges. Pioneer became one of the nation's largest telephone cooperatives. Independents continued to serve small towns and rural districts. These small companies are regulated by the Oklahoma Corporation Commission in the same manner as the larger ones, including service requirements and charges to customers. In 1992 forty-four companies offered phone service in the state, with Southwestern Bell owning 167 exchanges, GTE owning 57, Pioneer owning 51, and ALLTEL owning 36.

In 1994 Southwestern Bell initiated a name change to SBC Communications Incorporated. After Congress de-regulated the telecommunications industry in February 1996, allowing regional companies to compete with long distance carriers, among other rule changes, SBC began to expand. In 1996 it merged with Pacific Telesis Group, and in 1998 the company bought the Ameritech Corporation. The 2005 purchase of AT&T for $16 billion (pending approval by a number of federal regulators) changed the nation's telephone landscape. That year, the Oklahoma Telephone Association, which had elected its first president in 1935, listed forty-four Oklahoma telephone companies as members. These included Valor Communications, which acquired Oklahoma's GTE operations in 2000.

Eula E. Fullerton, "The Story of the Telephone in Oklahoma," The Chronicles of Oklahoma 12 (September 1934).

The following (as per The Chicago Manual of Style, 17th edition) is the preferred citation for articles:
Larry O'Dell, “Telephone Industry,” The Encyclopedia of Oklahoma History and Culture, https://www.okhistory.org/publications/enc/entry.php?entry=TE004.