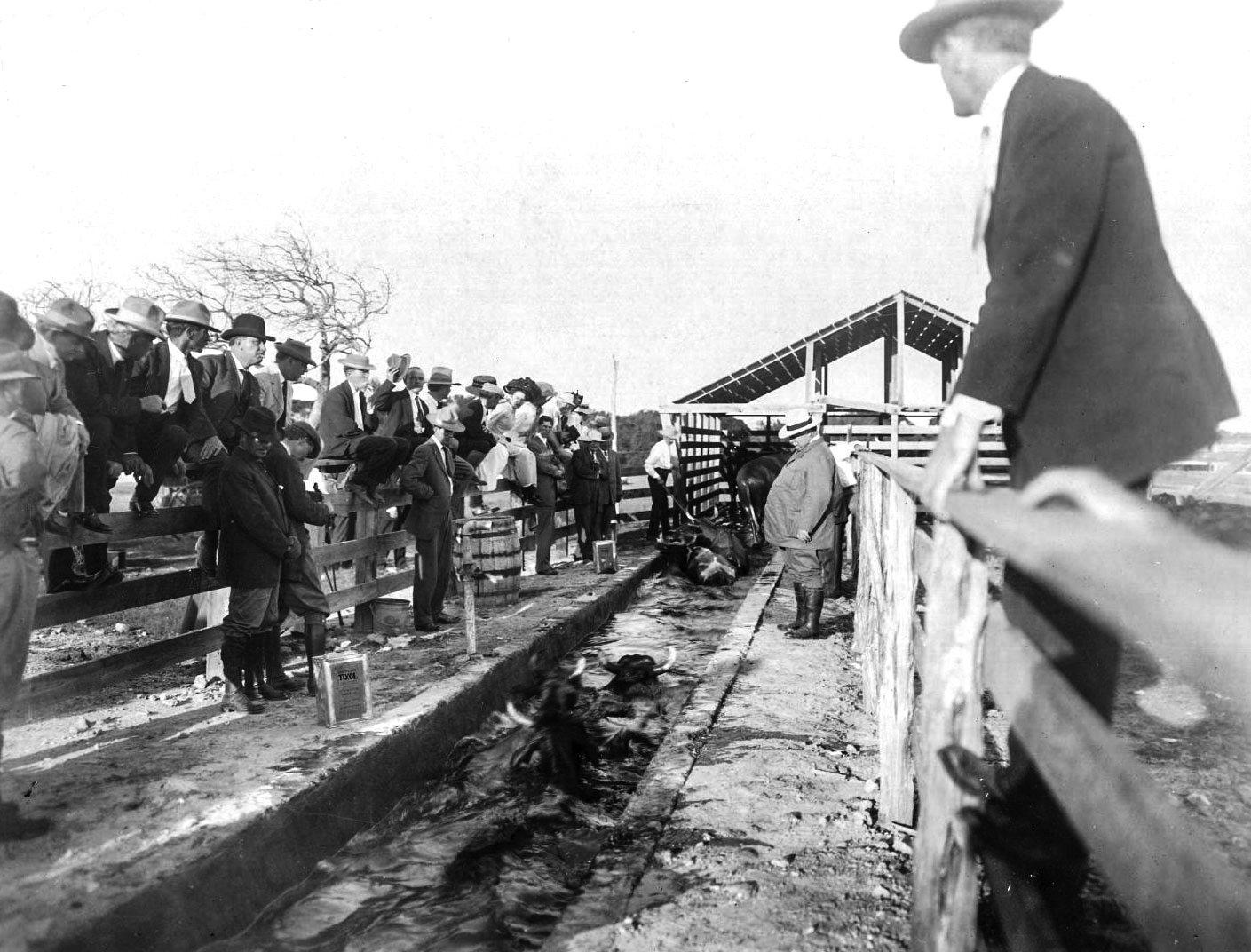 From the pre–Civil War years and through the World War I era Texas fever threatened the welfare of the nation's cattle industry. Caused by a parasitic protozoa called Babesia bigemina, the malady was characterized by a high fever, emaciation, anemia, bloody urine, numerous other symptoms, and eventually, death. The protozoa were hosted by cattle ticks. From the mid-nineteenth century several major cattle trails led from Texas through Indian Territory (Oklahoma) to Missouri, Kansas, and northward. American Indian ranching was also important in the territory, and in addition, a large amount of Indian land was regularly leased to whites for grazing. The disease was spread to local cattle by tick-infested longhorns in the herds being driven north. Texas fever outbreaks caused many midwestern states to quarantine Texas cattle herds, and Kansas completely banned them in 1885. Even after the demise of the trail drives, the illness plagued the region's livestock industry. Scientific research from 1889 to 1893 proved that cattle ticks carried the microbes, and a widespread tick control program slowly developed.

The federal and state governments established quarantine guidelines and mandated cattle inspection. In the 1890s Oklahoma Territory established an inspection system under the Live Stock Sanitary Commission. Various Indian nations also enacted measures to control the disease. Infected cattle were quarantined. However, there was no central authority to assure uniform compliance across the numerous jurisdictions. By law, in order for cattle to be moved out of a quarantined area, or into Oklahoma from a quarantined state, they had to be inspected, disinfected as necessary, and certified. After 1907 statehood the State Board of Agriculture supervised and controlled the inspection of livestock. County sheriffs, county commissioners, and the Corporation Commission shared some enforcement responsibility as well.

The first commonly used, effective tick-control practice involved dipping cattle in vats filled with water and crude oil. The vats were five feet deep, and on top of the water floated a three-and-one-half-foot-deep layer of oil. Oklahoma Territory's first vats were installed outside Pawnee, and in Indian Territory the first appeared near Wewoka, in the Seminole Nation. Another was built at Noble in 1898, near the southern border of Oklahoma Territory. Crude oil was only partly effective, and in 1910 it was replaced by a more lethal solution containing arsenic.

By 1917 there were more than seven hundred vats operating in Oklahoma. Texas fever eradication programs faced major opposition from "anti-dipping associations" that formed around the state. Members were generally cattle raisers who refused to accept scientific evidence that ticks were the problem and owners of small herds who considered dipping to be an expensive nuisance. Numerous incidents of violence occurred in several eastern Oklahoma counties that were under quarantine from 1915 through the early 1920s; vats were dynamited, and local enforcement officials were harassed.

Nevertheless, the state prevailed, sometimes only after the threat of martial law. The inspection statutes also survived court challenges. By the end of the 1920s Texas fever was no longer a major problem for the cattle industry or for the state's agricultural economy. Although the federal government in 1943 declared Texas fever eradicated, babesiosis (the common name) began to reappear at the end of the twentieth century. Cattle dipping in pesticide solutions continued to be practiced through the twentieth century, and immunization was also available.

F. W. Brewer, "The Texas Fever and Its Relation to the Cattle Industry," Annual Report of the Oklahoma State Board of Agriculture, 1915 (Oklahoma City: Harlow's Publishing Co., 1916).

The following (as per The Chicago Manual of Style, 17th edition) is the preferred citation for articles:
Carl N. Tyson, “Texas Fever,” The Encyclopedia of Oklahoma History and Culture, https://www.okhistory.org/publications/enc/entry.php?entry=TE022.