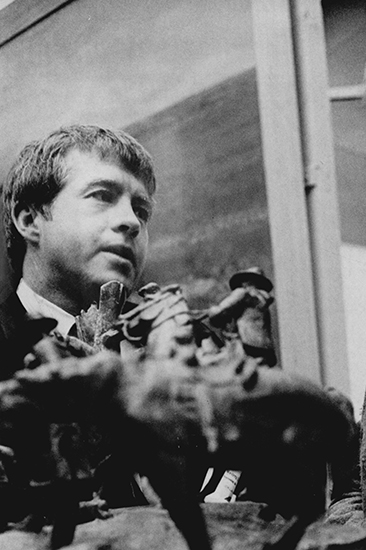 Recognizing his son's talent and theatrical ambitions, John Gulager taught him all he had learned during his own theatrical ventures. After a stint in the U.S. Marine Corps, Clu Gulager enrolled in Northeastern State College at Tahlequah. The promising actor was advised to transfer to Baylor University in Waco, Texas, for advanced instruction. In a short time he received a scholarship to study abroad and eventually landed in Paris working with, and gaining valuable experience from, Jean Louis Barrault, an internationally known French actor and director. After a year Gulager returned to Baylor where, in 1952, his professional career and his personal life endured dramatic changes. He fell in love with Miriam Nethery, a lovely young singer, and married her. He was offered an exciting acting opportunity in New York, but at this joy-filled moment of expected success, his father suddenly died.

In 1957 Gulager traveled to Los Angeles and acquired an acting job and an agent, in that order. In 1960 he was offered a role in a televison series titled The Tall Man (1960), in which he created an outstanding characterization of Billy the Kid. In 1964 he gave an impressive performance as a "hit man" partner to Lee Marvin in a film titled The Killers (1964). That film was intended to be the very first "made for television movie," but it contained too much violence for that medium. It was, instead, released to theaters. Clu Gulager's show business career spanned nearly five decades with recognition as a highly accomplished actor and director. His credits include more than sixty-five motion pictures and made-for-television movies, including The Last Picture Show (1971), My Heroes Have Always Been Cowboys (1991), The Gambler (1980), A Force of One (1979), and McQ (1974), and he has starred in five major TV series. At the beginning of the twenty-first century he remained a very busy actor-director but also taught his considerable skills to a new generation of talented hopefuls at Clu Gulager's Film Acting Workshop in Hollywood. The actor made his last film appearances in Feast (2005), Feast II: Sloppy Seconds (2005), and Feast III: The Happy Finish (2008), a series of horror films directed by his son John Gulager. Clu Gulager died in Los Angeles, California, on August 5, 2022.

The following (as per The Chicago Manual of Style, 17th edition) is the preferred citation for articles:
Judith Michener, “Gulager, William Martin,” The Encyclopedia of Oklahoma History and Culture, https://www.okhistory.org/publications/enc/entry.php?entry=GU002.