The Ross family was the dynasty of the Cherokee Nation in the 1800s. They ruled the nation through the most controversial and tumultuous era in the history of the tribe. The Rosses were involved in almost all aspects of government and business in the nation. The Ross connection defines the history of the Hunter’s Home, and any study of the home must include background on the growth of this large and distinguished family. See the genealogy page for details on particular family members.

Daniel Ross was the patriarch of the famed Ross family. He was a Scottish emigrant, born in 1760, who came to the Cherokee country in the East from Baltimore to trade with the Indians. While on an expedition in the Cherokee country, Daniel met John McDonald, another Scotch trader. McDonald was married to Ann Shorey, whose mother was a fullblood Cherokee and a member of the Bird Clan. Daniel Ross married the McDonalds’ daughter, Molly, in 1786 and settled near present-day Chattanooga, Tennessee, near Lookout Mountain. They would eventually have nine children, including the future Principal Chief, John Ross, and the father of Minerva and Amanda Murrell, Lewis Ross. (Source: Penelope Johnson Allen, "Leaves from the Family Tree: Ross," Chattanooga Times, Chattanooga, Tennessee, Date Unknown, pp. 220.) 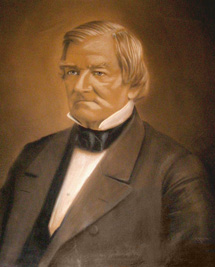 Daniel and Molly Ross’s third child, John, was born in Alabama in 1790. As a child, John attended school and learned to read and write English. In 1812, Ross married Mrs. Elizabeth (Brown) Henley, also known as “Quatie.” She was a widow with at least one previous child, and she and John would have six children. In 1813, Ross served at the Battle of Horseshoe Bend, fighting with the victorious Americans (under Andrew Jackson) against the Creeks. In the mid-1810s John Ross joined with Timothy Meigs, and later his brother Lewis, to establish trading posts in Georgia. In 1817 Ross was elected to the Cherokee National Council and became chairman of the Cherokee National Committee. In 1827 he served as President of the Cherokee Constitutional Convention. Then, in 1828, he was elected Principal Chief under the provisions of that Constitution.

In the early 1830s, after the election of President Andrew Jackson, residents in the state of Georgia took extreme measures to force the Cherokees to move West to the newly created Indian Territory. Chief Ross was adamantly opposed to removal, and he fought to keep the Cherokee homeland for as long as possible. During this time, a faction of Cherokees arose that favored removal. This “Treaty Party” was led by Major Ridge, his son John Ridge, and his nephews, Elias Boudinot and Stand Watie. These men, supported by roughly one-quarter of the tribe, signed the unauthorized Treaty of New Echota in 1835, stating that the tribe would move West in the next two years. Approximately 2,000 Treaty Party supporters would in fact move in that time. Chief Ross, representing the majority of the tribe, asserted that this treaty was illegally made and refused to abide by its terms. However, Congress recognized the treaty as valid, and the tribe was forced to remove on the Trail of Tears in 1838–39. During this devastating journey as many as 4,000 Cherokees died (though recent estimates by some historians significantly reduce that number), including the Chief’s wife Quatie who is buried near Little Rock, Arkansas.

After the Ross Party moved West and rejoined the rest of the tribe, John Ross settled at Park Hill. In the early 1840s he built a large plantation home called Rose Cottage, which was located about one-half mile east of the Hunter’s Home. In 1844 he married his second wife, Mary Brian Stapler, a Quaker from Wilmington, Delaware. They had two children. These years were a prosperous era for Ross and the Cherokees.

The American Civil War (1861–65) brought more hard times on Ross and his people. Most of the small town of Park Hill was damaged or destroyed in the guerilla warfare that ensued. Ross originally wanted the Cherokee Nation to remain neutral. However, he felt compelled to sign a treaty of alliance with the South in order to keep the Cherokee Nation united, and did so in September of 1861. Murrell was a witness to the signing of the treaty. In July of 1862, Union troops came to Park Hill and arrested the Chief. He took about thirty-five family members with him to Philadelphia, where he remained for most of the war, keeping in close contact with Union officials including President Lincoln. Ross and his family were certainly Union supporters, evidenced by the fact that several sons and grandsons joined the Union Indian Home Guard. Stand Watie, Ross’s old enemy, became a prominent Confederate General. In 1863 Watie and his troops burned Rose Cottage on a path of destruction that stretched from Tahlequah to Park Hill. Ross returned to Park Hill for a couple of months after the war, and he stayed in the Hunter’s Home.

John Ross would serve as Principal Chief until his death in Washington, DC, on August 1, 1866. He was initially buried in Wilmington, Delaware, but his body was later exhumed and returned to Park Hill, where he was interred at the Ross Cemetery. His term as chief was the most turbulent and controversial period in the tribe’s history, but many consider him the greatest chief because of his relentless drive to keep his nation united.