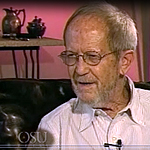 "The Hot Kid is Leonard at his best"—Tulsa World

When Elmore Leonard’s western novel The Hot Kid (2005) was released, he insisted that the book launch be held in Oklahoma, where the story takes place. Elmore lived in Oklahoma briefly as a boy and has also set other stories in the state. In fact, he is so loyal that when The New York Times was serializing a sequel to The Hot Kid, he took great exception to a proposed illustration that downgraded Tulsa’s Mayo Hotel to a motel.

Though known for other classic westerns such as Hombre (1961), Elmore has also written several best-selling crime capers, including Get Shorty (1990).

One of Elmore Leonard's rules for good writing is to never use the words suddenly or all hell broke loose.

Getting Started with Elmore Leonard