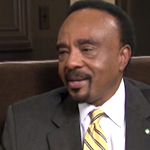 For Clifton Taulbert, all roads lead to and from Glen Allan, Missipppi, the town that nurtured him as a child and inspired his bestselling memoir, Once Upon a Time When We Were Colored (1989). The book, which also became a major film, focuses on the “porch people,” those friends and family members who helped Cliff sustain his dreams in the segregated south.

The “porch people” have continued to be his muse and their values inform his motivational book, Eight Habits of the Heart (1997), which focuses on cultivating “courage” and “dependability” as everyday life skills.

One of the first books Nelson Mandella received when he was released from prison, was Clifton Taulbert's Once Upon a Time When We Were Colored.

Getting Started with Clifton Taulbert