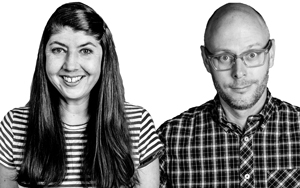 A Very OK Podcast was created in 2017 by Corey Ayers and Angela Spindle to give listeners a fresh take on Oklahoma history and culture. The duo hosted the podcast from 2017 to 2018, interviewing authors, historians, and history lovers about a variety of topics—from architecture to chicken-fried steak. OHS wants to thank those who donated to make this project possible.

Corey and Angela hit the road! For this episode, we traveled to the Greenwood Cultural Center in Tulsa, Oklahoma, and sat down with author Hannibal Johnson to discuss the fascinating, inspiring story of Black Wall Street in Tulsa.

“Is That You, Mummy? The Tale of Oklahoma’s Very Own Mummy Mystery”
March 15, 2018 Download audio

Angela and Corey dive into the history of the Oklahoma State Capitol. The story of its “theft” and the building itself. Nathan Turner, director of the Oklahoma Territorial Museum, and Trait Thompson, project manager of the Oklahoma Capitol Restoration Project, join us to talk all things capitol!

This week we discuss artist and architect Bruce Goff with three special guests! Lynda Ozan from the Oklahoma State Historic Preservation Office, Lynne Rostochil from the Okie Mod Squad, and filmmaker Britni Harris join us to discuss the unique work of Goff and his Okie ties.

Did you know that one of the world's classiest and most famous nightclubs was owned and operated by a bootlegger from Oklahoma? New York City's Stork Club was the apex of high society and celebrity from 1929 to 1965. So pour a cocktail and join Corey and Angela as they tell you all about Sherman Billingsley and his rise from bootlegging to high society.

Corey and Angela look at the complicated life of outlaw Al Jennings. He went from lawyer to outlaw and politician and movie star. Special guest Buddy Johnson joins us to break down the life of this semi-legendary Oklahoma outlaw.

Y’all wonder why we sound the way we do? This week we talk about what makes an Oklahoma accent. Dr. Dennis Preston, regents professor of linguistics from Oklahoma State University, and Dr. Bob Blackburn, executive director of the Oklahoma Historical Society, join us to talk about Oklahoma accents and the migration patterns that make us uniquely Oklahoman.

“The Chisholm Trail Part Two: The Job of a Cowboy”
November 22, 2017 Download audio

This week we finish up our two-part series on the Chisholm Trail. Special guest Don Reeves, Chair of Cowboy Culture at the National Cowboy & Western Heritage Museum, joins us to discuss what being a cowboy on the trail was actually like. Saddle up, folks, and happy trails.

This week we explore factors that led to the creation of the Chisholm Trail. You may have driven by a historical marker or have a vague idea, but this episode, with special guest Dr. Kenny Brown, provides a full breakdown of life on a cattle drive. So giddy-up, cowboys and cowgirls—let’s hit the trail!

“The Haunting of the Overholser Mansion”
October 25, 2017 Download audio

Hey there, ghouls and gals! This week we delve into the history and haunting of Oklahoma City’s Overholser Mansion. First, we talk to the director of Preservation Oklahoma, David Pettyjohn, about Henry Overholser and the history of the mansion. Then we chat with Tonya McCoy about her paranormal research at the mansion. So tighten up your pantaloons, it's about to get scary!

Get ready for the Red River rivalry! Listen to the story of how Oklahoma and Texas went to war—well, sort of. Guns, artillery, and political backroom deals, this story has it all. Also, we check in with a voice of Sooner Nation to get the lowdown on the history of the big game itself, in an absolutely jam-packed episode.

Ever wondered how Oklahoma got its shape? Explore the how, what, and why of the Oklahoma Panhandle with Corey and Angela.

For fifty years The Outsiders, written by Tulsa native S. E. Hinton, has been critically acclaimed, studied, and in some cases banned. The podcast crew discusses the book, and the film, and why the story still resonates today. Joining them in the studio is Danny O’Connor of House of Pain. Danny has saved the original house from the film and is opening an Outsiders museum in Tulsa, Oklahoma.

The team delves into the history of the 1889 Land Run, which opened up the Unassigned Lands for settlement. How did the lands become unassigned? What's a sooner and what's a boomer? How exactly did the land run work? We try our best to answer these questions in this debut episode!

Hello everybody! This episode is just an introduction and a shout-out to everyone who made this possible.