Home |   Research Center |   Film and Video |  The Daughter of Dawn

The Daughter of Dawn 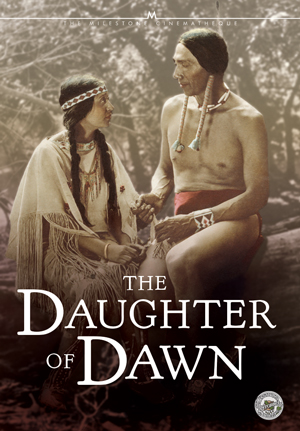 Available on DVD and Blu-Ray

After screening only a handful of times when it was made in 1920, The Daughter of Dawn disappeared without a trace. For almost ninety years it was considered lost—until it was rediscovered by the Oklahoma Historical Society. Now beautifully restored and with a new orchestral score, the film is an astonishing revelation.

The beautifully filmed drama features romantic rivalry, buffalo hunts, village scenes, dances, deceit, tests of courage, and hand-to-hand combat. The cast of more than three hundred Kiowa and Comanche actors brought their own tipis, horses, clothing, and traditions to the set, making The Daughter of Dawn fascinating to film fans and students of American Indian history and culture.

Bonus features include eight video documentaries produced by the Oklahoma Historical Society about the history and rediscovery of the film.

Buy on DVD   Buy on Blu-Ray

The Daughter of Dawn is an eighty minute, six-reel silent film shot in May, June, and July of 1920 in the Wichita Mountains of southwest Oklahoma.

The film includes a significant tipi given by Cheyenne Chief Nikko-se-vast to the Kiowa Chief Dohausen. The tipi in the movie was renewed in 1916 with images painted by Haungooah or Silverhorn and Stephen Mopope, one of the Kiowa Five. That very tipi was given to the Oklahoma Historical Society in 1928.

The story, played by an all-Indian cast of 300 Kiowas and Comanches, includes a four-way love story, two buffalo hunt scenes, a battle scene, village scenes, dances, deceit, courage, hand to hand combat, love scenes, and a happy ending. The Indians, who had been on the reservation less than fifty years, brought with them their own tipis, horses, clothing, and material culture. The lead actor is White Parker, the son of the great Comanche leader Quanah Parker. 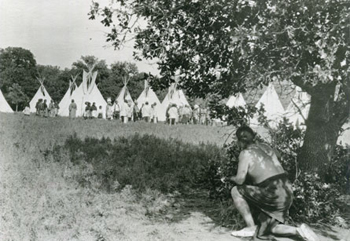 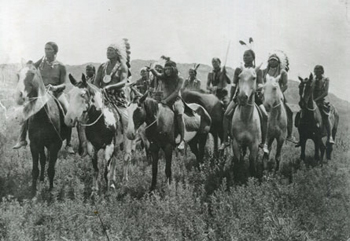 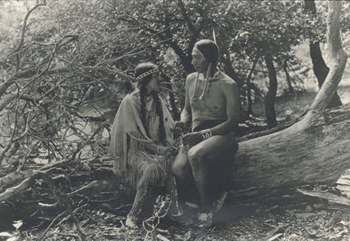 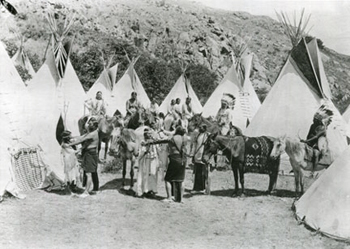 In the film, the Daughter of Dawn is played by Esther LeBarre. Her character is the daughter of the Chief of the Kiowas, played by Hunting Horse. The two young men who are romantically interested in her are White Eagle, played by White Parker, and Black Wolf, played by Jack Sankadota. Dawn loves White, but the Chief says that Wolf has many ponies so he must consider both as potential husbands for his daughter. So, Wolf loves Dawn. Dawn loves White. White loves Dawn. And for good measure a fourth person is added to this love triangle. Red Wing, played by Wanada Parker, is in love with Wolf. Both White Parker and Wanada Parker were children of the Comanche Chief Quanah Parker.

The script was developed by Norbert Myles, an actor, writer, and director brought into the project by Richard Banks, who started the Texas Film Company in 1916. Myles wrote on the cover of his script, “This story has been made possible by R.E. Banks, whose knowledge of the Indian, and of his traditions, was gained during the twenty-five years that he lived with them.”

The Fall 1999 issue of The Chronicles of Oklahoma included an article by Oklahoma history teacher Leo Kelley about The Daughter of Dawn. He based the article on thirty-six production photos housed at the Museum of the Western Prairie in Altus and the original script of the film housed at the Library of Congress. From these two resources, he pieced together the story of the film. Read the article (PDF).

Funding for this project provided by

On December 18, 2013, the Oklahoma Historical Society announced the Library of Congress in Washington, DC selected The Daughter of Dawn as one of the films inducted to its 2013 National Film Registry, a collection of cinematic treasures that represent important cultural, artistic and historic achievements in filmmaking. Find out more.