Home |   About OHS |   Board of Directors |  Lindsay Robertson 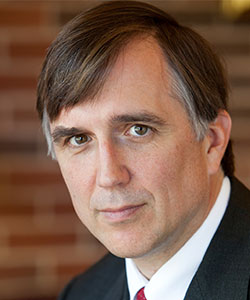 Lindsay Robertson is the Chickasaw Nation Endowed Chair in Native American Law and professor of law, history, and Native American studies at the University of Oklahoma (OU). He received his JD (1986) and PhD (history, 1997) from the University of Virginia, and an MA (Native American studies, 2020) from OU. He joined the OU law faculty in 1997 and serves as faculty director of the Center for the Study of American Indian Law and Policy. He also regularly teaches a summer course on the history of US Indian law and policy at the University of Mainz, Germany. He is an elected member of the American Law Institute and the American Bar Foundation, and serves as a justice on the Supreme Court of the Cheyenne and Arapaho Tribes. He was cofounder of Octagon, a digital history production company, and is currently a program leader in OU’s online graduate education program. In addition to numerous articles and book chapters, Robertson is the author of the award-winning Conquest by Law (Oxford University Press, 2005), the first comprehensive history of the US Supreme Court’s foundational Indian Law decision Johnson v. M’Intosh (1823). He was private sector advisor to the US Department of State delegations to the Working Groups on the UN Declaration of the Rights of Indigenous Peoples (2004–06) and the American Declaration on the Rights of Indigenous Peoples (2004–07), and from 2010 to 2012 was a member of the US Department of State Advisory Committee on International Law. In 2014 he served as advisor on Indigenous peoples’ law to the chair of the UN Committee on the Elimination of Racial Discrimination. In 2014 Robertson was the recipient of the first David L. Boren Award for Outstanding Global Engagement. In 2016 he received the first Bacone College Strickland School of Tribal Law and Criminal Justice “Warrior for Justice” Award. In 2017 he was awarded the OU Regents’ Award for Superior Professional Service and Public Outreach.