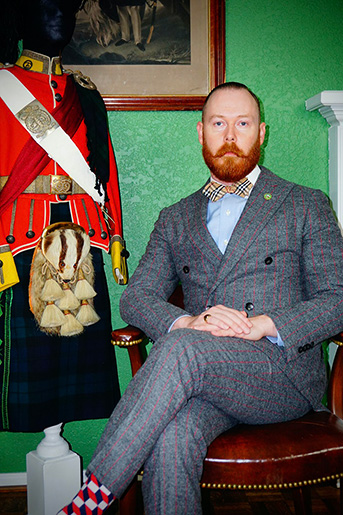 T. S. Akers, a tribal citizen of the Muscogee Nation, received a bachelor of arts in history and a master of arts in museum studies from the University of Oklahoma. In partnership with the Oklahoma Historical Society, he established an archive of historic Oklahoma Masonic photographs and has since worked to catalog the graves of the past presiding grand officers of the York Rite of Freemasonry in Oklahoma. Akers currently serves on the boards of directors for the Friends of Honey Springs Battlefield and the Grand Lodge of Oklahoma Museum and Library. He was instrumental in forming the History OffCenter Committee of the Oklahoma Historical Society. Since 2014 Akers has been the curator of collections for the Scottish Rite Valley of McAlester. The Chisholm Trail Museum of Kingfisher invited him to guest curate the exhibition Stars on Their Shoulders: Military Uniforms of the 20th Century in 2016, and he curated a photographic exhibition for the current owner of the former downtown Oklahoma City Masonic Temple in 2018.

Akers has spoken on the history of Freemasonry in Indian Territory across the United States and has written extensively on the subject. His papers have been published in Knight Templar Magazine, Philalethes: The Journal of Masonic Research and Letters, the Rocky Mountain Mason, and The Chronicles of Oklahoma. Akers has published books including Knights on the Prairie: A History of Templary in Oklahoma, Masonic Generals of the Oklahoma National Guard: 1894–1965, The Grand High Priests of Oklahoma Royal Arch Masonry, The Illustrious Grand Masters of Oklahoma Cryptic Masonry, and Chilly McIntosh and the Muscogee (Creek) Nation: 1800–1875. Akers is a past master of Guildhall Lodge No. 553, and a perpetual member of Eufaula Lodge No. 1, where he took the degrees of Freemasonry. He resides in Oklahoma City with his wife, Aeriel, and son, Chilly. Additionally, Akers is a member of the First Families of the Twin Territories.