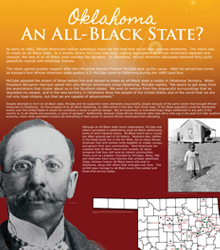 Shortly after the 1889 Land Run opened the Oklahoma Territory to settlement, black leaders hoped to make the newly-opened lands a home for oppressed African Americans throughout the United States. Oklahoma was promoted as the land where African Americans could come for the dream of self-government. As many as fifty communities arose where only African Americans lived and governed themselves. Even though “Jim Crow” became the law of the land after statehood, All-Black towns survived and continue to thrive in modern Oklahoma. 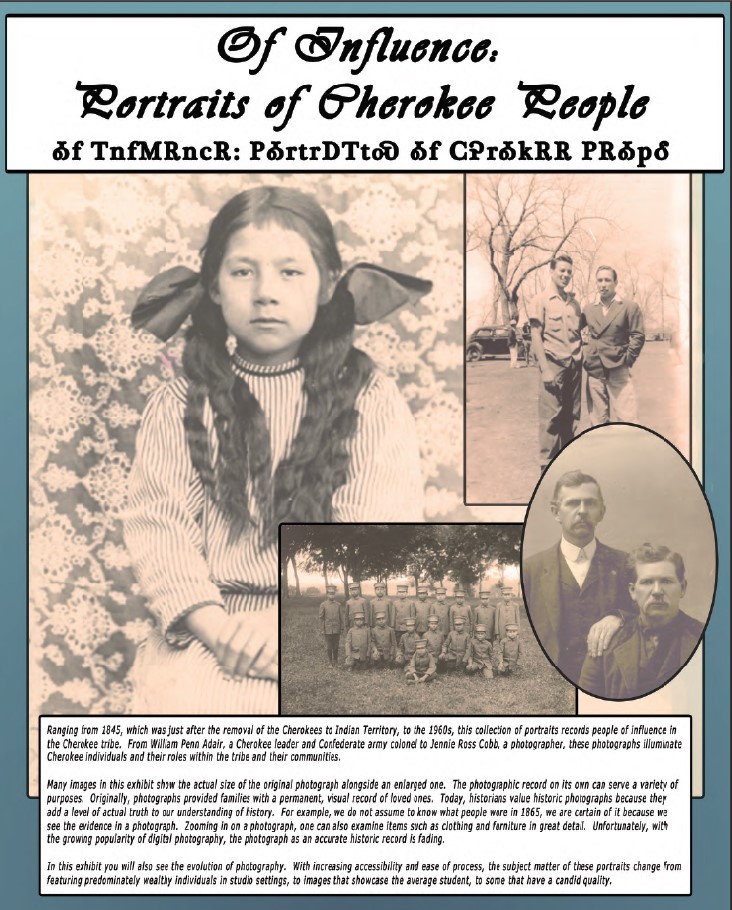 Of Influence: Portraits of Cherokee People

Ranging from 1845 to the 1960s, this portrait collection presents people of influence in the Cherokee tribe. From Cherokee leader and Confederate Colonel William Penn Adair to photographer Jennie Ross Cobb, these photographs illuminate Cherokee individuals and their roles within their tribe and communities. Many images in this exhibit show the actual size of the original photograph alongside an enlarged version. 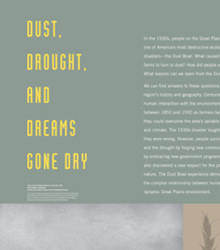 Dust, Drought, and Dreams Gone Dry was organized by the American Library Association, the National Endowment for the Humanities, and Dr. Jess C. Porter from the University of Arkansas at Little Rock. Some of the exhibit is from the Oklahoma State University library and features their Women of the Dust Bowl oral histories. Mount Holyoke College Library, which houses the Caroline Henderson papers (letters, essays and articles by a woman who farmed throughout the Dust Bowl) were also an inspiration for the exhibit. 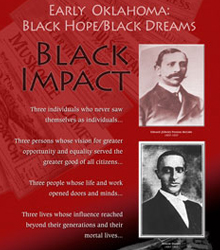 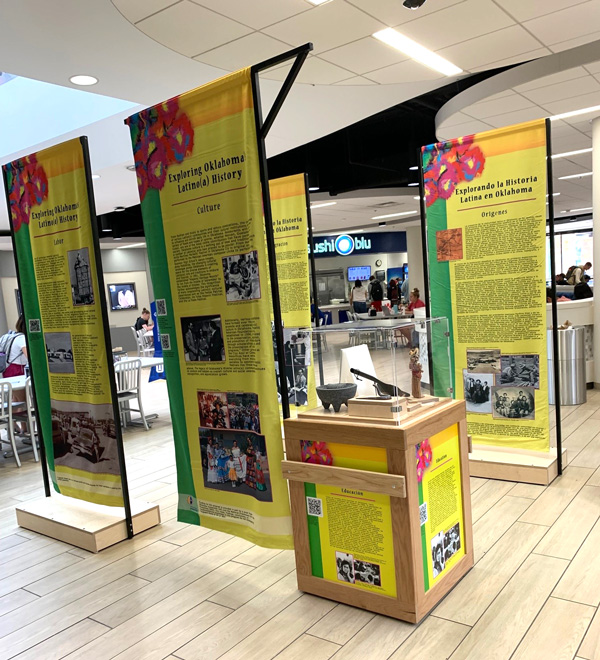 The presence of the Latino(a) community has been felt in Oklahoma since the early days of Spanish exploration in the New World. Originally, the Spanish laid claim to parts of modern-day Oklahoma after the expeditions of Francisco Vázquez de Coronado in 1541 and Juan de Oñate in 1601. The Spanish claim on Oklahoma, which was passed on to Mexico, would last for more than three hundred years. France later claimed a portion as its own territory after Sieur de La Salle ventured west in 1682. With the Adams-Onís Treaty in 1819, the United States gained control of all lands in present Oklahoma except for the Panhandle, which the Republic of Mexico did not cede until the end of the Mexican-American War in 1848.

In Oklahoma, Spanish explorers briefly mixed with Indigenous tribes in the early days of exploration. Later, some Spanish settlers from Mexico were brought to Oklahoma as captives of various tribes, while other settlers hired tribal members to work on ranches across northern areas of Mexican territory. With the formation of the Great Spanish Road, the earliest recorded trail to the Red River, Oklahoma became commercially linked to Mexico, creating an intermixing of goods, cultures, and peoples.

Much of Oklahoma’s Latino(a) population, historically speaking, is of Mexican ancestry. Through the 1960s, Oklahoma’s Latino(a) communities were composed almost exclusively of immigrants from Mexico, ranging from those who fled during the Mexican Revolution, to families that joined their migrant worker relatives in the state and settled here permanently. Some of the numbers are difficult to track because the US census did not offer a racial category for Latin Americans until the 1980s. Still, studies show an uptick in Latino(a) migration to Oklahoma in the 1950s and 1960s, followed by a significant surge after the 1980s.

This exhibit is presented in both English and Spanish, and includes the immigration of Latino(a) people from pre-statehood to the present day, touching on on education, religion, and culture. 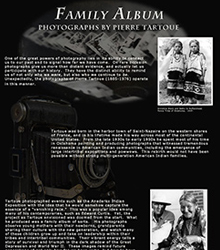 One of the great powers of photography lies in its ability to connect us to our past and to signal how far we have come. They have the distinct ability to remind us of not only who we were, but also who we continue to be. The photographs of Pierre Tartoue (1885–1976) operate in this manner.

Tartoue was born in the harbor town of Saint-Nazaire on the western shores of France, and in his lifetime made his way across most of the continental United States. From the late 1930s to early 1950s he spent most of his time in Oklahoma, painting and producing photographs that witnessed a tremendous renaissance in American Indian communities, including the emergence of large intertribal expositions and powwows. This rebirth would not have been possible without strong multi-generation American Indian families. 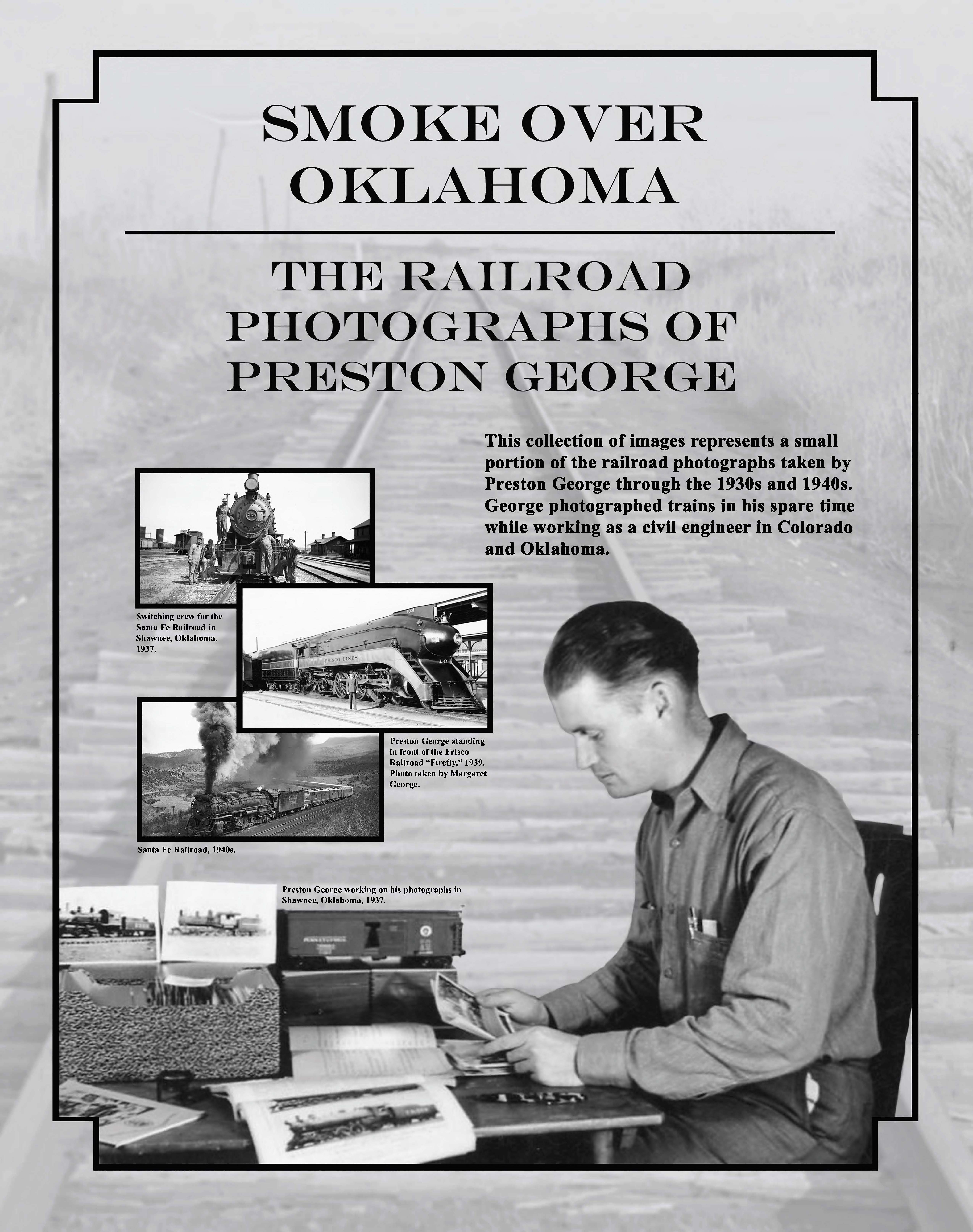 Smoke Over Oklahoma: The Railroad Photographs of Preston George

This collection of images represents the railroad photographs taken by Preston George during the 1930s and 1940s. George photographed trains in his spare time while working as a civil engineer in Colorado and Oklahoma. Born in 1906 in Indian Territory, George’s interest in trains began at an early age, but did not culminate into a full-fledged pastime until the 1930s when he said, “I ran across a copy of Railroad Stories, later renamed Railroad Magazine, and saw the many photos of locomotives and trains. This started me on a new hobby...Soon, I was snapping still pictures of locomotives with a cheap Kodak camera and trading them far and wide with other fans.” 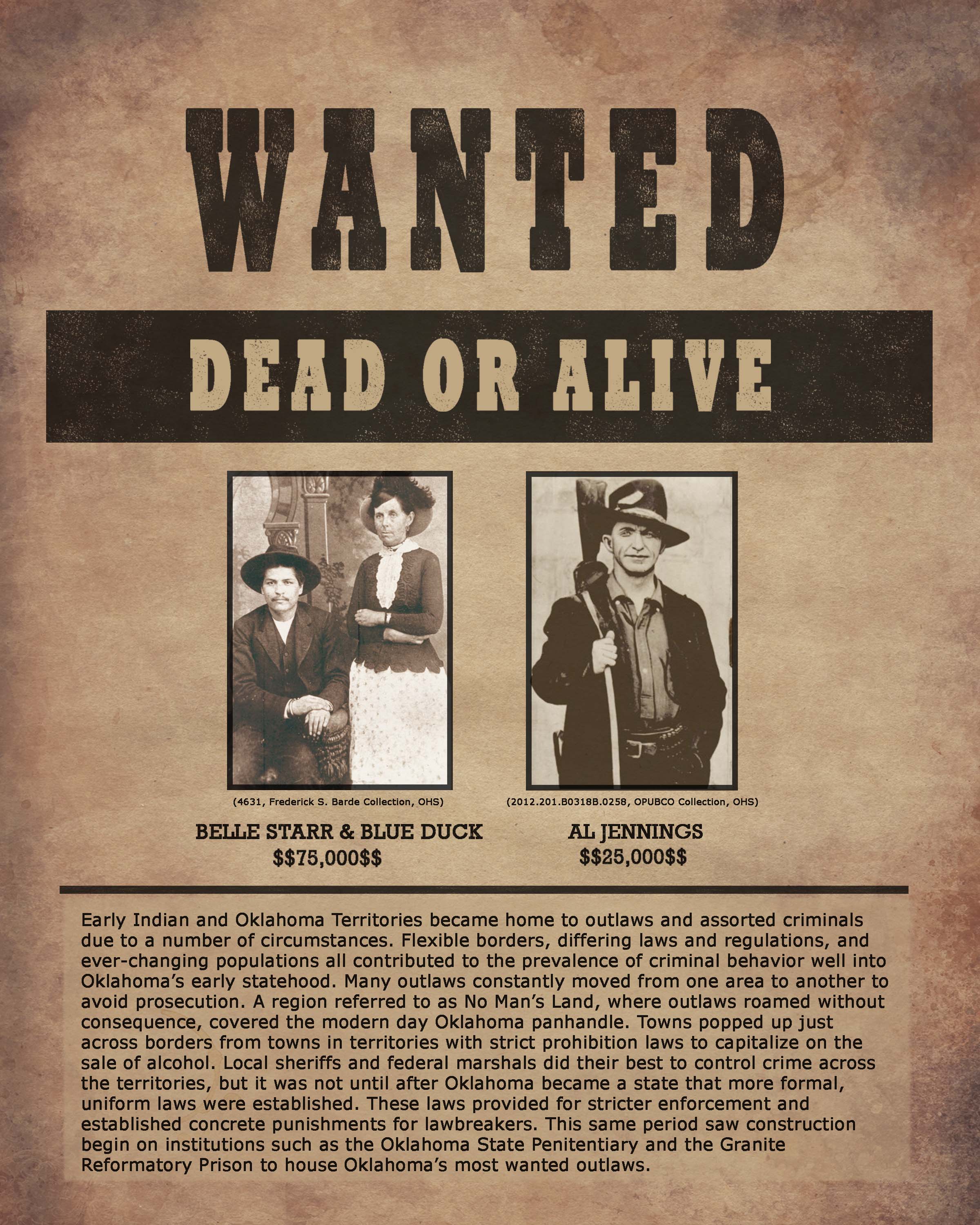 Images from the Federal Bureau of Investigation, the University of Oklahoma Western History Collections, the National Archives, the vast photographic archives of the Oklahoma Historical Society, and private lenders are included in this exhibit. These black-and-white images consist of mugshots, crime scene locations, and group shots with criminals and law enforcement officers. They span more than 70 years, starting before statehood in 1907 and reaching into the late 1950s.

“Where They Went”: A Photographic History of Oklahoma Animals

The exhibit “Where They Went”: A Photographic History of Oklahoma Animals features photos curated from the Oklahoma Historical Society’s Photograph Archives. The images in this exhibit represent just a few of our many images that express the friendly relationship between humans and their domestic and farm animals throughout Oklahoma’s history.

Funding for this exhibit was provided by the Kirkpatrick Foundation. 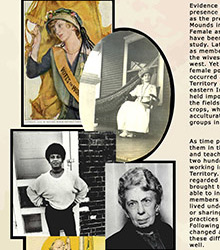