How Does a Pipe Organ Work?

An organ makes sounds by passing air through a variety of pipes and other mechanisms. To start at the beginning, where does the air come from? In the basement of the Oklahoma History Center is the blower, a circular fan run by an electric motor.

The motor compresses air and puts it into a closed system of ducts called windlines, which transfer the air to the organ chambers.

The air then enters reservoirs that have valves inside to regulate the airflow to a constant pressure.

The regulated air is then delivered to an air-tight windchest. The pipes sit on individual holes in the top side of the windchest, and each hole is fitted with a valve. The valve is controlled by an electromagnet that is wired to the keys in the console. When a key is pressed, it closes a circuit that makes the valve open, and the air inside the windchest escapes through the hole and into the pipe, making it play.

To make different sounds, such as a trumpet or a flute, there is one pipe for each key on the keyboard. The stop tabs on the console let the organist choose which sounds will play or not play.

The regulated air pressure makes the pipes play at the same volume. In order to give the effect of volume change, the opening of the chamber is covered with a series of shutters, or louvers, that can be operated from the console. When the shutters are open the sound seems louder, and when the shutters are closed the sound is muffled and seems softer. The expression shoes on the console control the position of the shutters.

Others make up toy counters and include drums, cymbals, slide whistles, doorbells, and other special effects. All of these are operated from the console through mechanisms very similar to the regular windchests.

The buttons between the keyboards are called pistons. They can be preset with any combination of stops so that the organist can quickly change the sounds being used at any time. 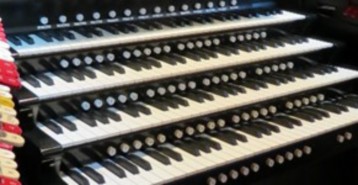