The year 2020 marked 100 years since the passing of the Nineteenth Amendment, which the Oklahoma Historical Society celebrated with exhibits, programs, and events. You can explore our online 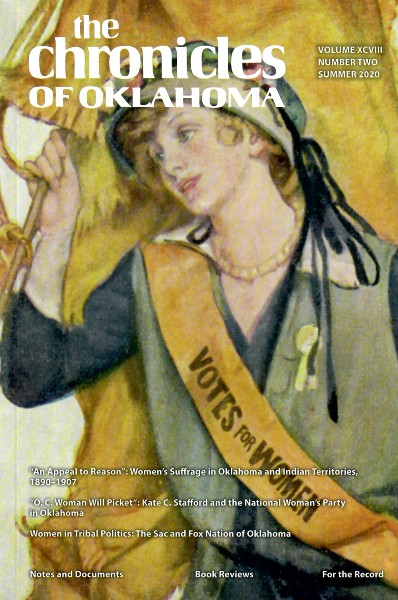 The summer 2020 issue of The Chronicles of Oklahoma includes “‘An Appeal to Reason’: Women’s Suffrage in Oklahoma and Indian Territories, 1890–1907” by Linda D. Wilson, “‘O. C. Woman Will Picket’: Kate C. Stafford and the National Woman’s Party” by Tally D. Fugate, “Women in Tribal Politics: The Sac and Fox Nation of Oklahoma” by Regina Slaughter Gordon, and Notes and Documents exploring resources about women’s suffrage and women in politics at the OHS Research Center.

Copies of this issue are available in the Museum Store at the Oklahoma History Center. You may also purchase a copy from the online store.

This Land is Herland Program Series

The Oklahoma Historical Society and the Cherokee Strip Regional Heritage Center presented This Land is Herland, a series of three programs on women’s activism in Oklahoma. Sponsored by Oklahoma Humanities, the programs were held online in August, September, and November. You can view the videos on our virtual programs page.

Traveling Exhibits and Trunks from the Oklahoma History Center

Explore The Encyclopedia of Oklahoma History and Culture online to learn more about the history of women’s suffrage in Oklahoma.

Women in Oklahoma: A Century of Change edited by Melvena Thurman

The National Register of Historic Places

The National Register is a catalog of the buildings, sites, structures, districts, and objects significant in our past. Listing in the National Register provides recognition, limited protection and, in some cases, financial incentives for these important properties. The Oklahoma State Historic Preservation Office identifies, evaluates, and nominates properties for this special designation. Use the links below to view more about these properties.