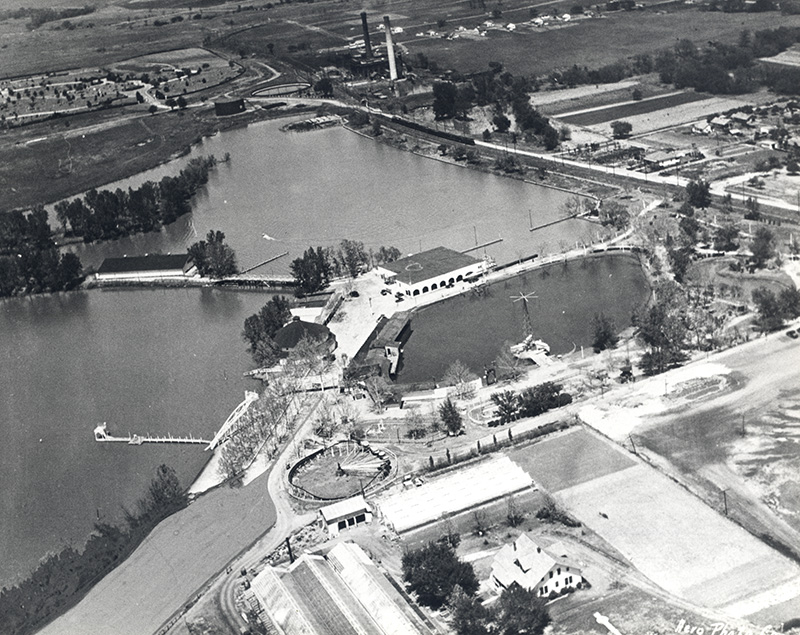 Recreation gained a foothold early in Oklahoma's development. The construction of opera houses, saloons, racetracks, and other forms of entertainment quickly appeared in many towns. Amusement parks, while a relatively new phenomenon, added to the merriment. Oklahoma has mirrored the national evolution of this industry; by the early twentieth century most American cities boasted a traditional amusement park, that is, a permanent park with midway, mechanical rides such as roller coasters and carousels, and pavilions that hosted shows and dances. These competed with carnivals, that is, traveling troupes that were composed of rides, shows, and small midways. Later in the century, traditional amusement parks competed with and evolved into theme parks designed around a unifying theme or related concepts, for example, Disneyland or Six Flags Over Texas. Although the latter category would include Oklahoma City's Frontier City and to a lesser extent the Arbuckle Wilderness near Davis, most Oklahoma parks followed the traditional amusement park formula.

According to Don Wilmeth in the Encyclopedia of American Social History, the American amusement park can be traced back to European traditions of the medieval fair, carnival, and seventeenth-century pleasure gardens. After Coney Island developed in 1893, the amusement park idea slowly swept the country. The number of parks grew rapidly as urban areas adopted the use of electric power to light homes and businesses.

Delmar Garden, one of the earliest Oklahoma examples, enriched life in Oklahoma City from 1902 to 1910. John Sinopoulo and Joseph Marre, who trained at Delmar Garden in St. Louis, opened the park on land owned by Charles Colcord. The amenities included a theater, racetrack, baseball field, swimming pool, railway, beer garden, hotel, restaurant, and swimming pool. Located on 140 acres near the North Canadian River, the Garden enjoyed a large clientele and attracted entertainers like Lon Chaney, boxers John L. Sullivan and Jack Dempsey, and Dan Patch, a legendary racehorse. Unfortunately, swarms of mosquitoes that accompanied the river's annual flooding contributed to Delmar Garden's demise, and the advent of prohibition was the death blow.

Oklahoma City and other Oklahoma urban centers had early parks that mirrored a national pattern of using power from a local "light plant" to run the rides. The Oklahoma Railway Company owned Belle Isle Park and Lake, located at the end of the interurban line, and, after adding an electric plant, the company helped develop the area into an amusement park with picnicking, boating, rides, concessions, and a dance pavilion. Oklahoma Gas and Electric Company bought Belle Isle in 1928 and soon disassembled the park. The mixture of streetcars, electricity, and amusement parks occurred nationwide, and many Oklahoma towns, including Tulsa, which had Electric Park, fit the pattern. Wheeler Park, at the other end of the interurban line, also provided entertainment for early Oklahoma Cityites; the park included a zoo.

Oklahoma City boasted three amusement parks in the mid-twentieth century: Wedgewood, Springlake, and Frontier City. In 1924, after his spring-fed pond in northeast Oklahoma City had been open to swimming and picnicking for six years, Roy Staton built a swimming pool there. Later expanding his park, he bought many of the rides from the defunct Belle Isle Park, built a ballroom, and in 1929 added the Big Dipper roller coaster, a fixture in the park for almost fifty years. The height of Springlake's popularity extended from the 1950s into the 1960s, and the park attracted top entertainers of the era including Johnny Cash, the Righteous Brothers, Roy Acuff, and Conway Twitty. A large riot that erupted in 1971 in the park, between whites and blacks, frightened away potential customers and hastened Springlake's demise. A change of ownership, poor maintenance, and fire led to the park's 1981 sale to the Oklahoma City Vo-Tech Board, which closed Springlake for good. Wedgewood Village Amusement Park operated in northwest Oklahoma City in the late 1950s and 1960s. Wedgewood, opened in 1958, had a fine carousel, swimming, boating, a roller coaster, and all the standard amenities before closing in 1969. Frontier City, owned at the beginning of the twenty-first century by the Oklahoma City-based Six Flags, Inc., one of the largest amusement companies in the nation, began operation in 1958 on the heavily traveled Route 66 and I-35 in northeast Oklahoma City. Using a western theme and moving an entire western town from the Oklahoma State Fair, the new park attracted 1.2 million visitors in the first year. Although Frontier City had lean years, the theme park continued to entertain the region into the twenty-first century by providing nationally recognized entertainment and an ever-growing selection of thrill rides.

Tulsa-area amusement parks also flourished. In 1907 Samuel Orcutt opened his lake outside of Tulsa to boating and swimming. By 1910 Orcutt Park, the last stop on the streetcar line, offered rides, a dancing pavilion, and moving pictures; the owners added a six-hundred-foot roller coaster, Tulsa's first, the next year. Orcutt Park became Swan Lake and slowly gave way to residential development. In west Tulsa the Electric Amusement Park had opened by 1921 and featured a dance hall, rides, concessions, swimming, and a memorable miniature train. In the mid-1920s William Falkenberg established Crystal City Amusement Park next to and eventually absorbing Electric Park. He added an ever-growing number of rides, including the large Zingo roller coaster. The park became known for its Casa Loma dance hall. The dance hall and bathhouse burned down in the mid-1950s, and the park soon disappeared. Lakeview Amusement Park saved some of the Crystal City rides and opened near Mohawk Zoo. Another distraction for Tulsans was the Sand Springs Amusement Park, at the end of the Sand Springs Railway line at nearby Sand Springs, beginning in 1911 and lasting until the mid-1930s. Near Jenks, the Skyline Amusement Park thrived from the mid-1950s until the modern Bell's Amusement Park out-competed it in the late 1960s. In 1969 Skyline management sold the park to a Tulsa liquor distributor who renamed it Indian Nations Park, which closed a year later. Bell's, which still flourished at the turn of the twenty-first century on East Twenty-first Street, began in 1951, and had a reputation for its Zingo roller coaster, built in memory of Crystal City's old Zingo.

Amusement parks were not an exclusively big-city phenomenon, however. Smaller Oklahoma communities supported these ventures. Benson Park, which began in 1907 with an opera house located on the interurban line between Tecumseh and Shawnee, had a roller coaster, natatorium (indoor pool), pavilion, skating rink, and concession. The park lasted until 1932. Southwestern Oklahoma also had many places for young and old to go for thrills. Craterville, named for a meteor crater in the Wichita Mountains, existed in the present Wichita Mountains Wildlife Refuge. After the refuge took over the land, the park was moved to a location two miles east of Lugert. Besides having the usual amusement park amenities, Craterville hosted rodeos and the All-Indian Fair and Exposition that began in 1924 and moved to Anadarko in 1935 as the American Indian Exposition. Craterville closed in the mid-1950s, and Fort Sill bought the land. Eagle Park opened a year later. A little north of the defunct Craterville site, Eagle Park endured until 1986. It had the usual amusement park fare but transplanted over twenty historic buildings from Comanche County, including Quanah Parker's 1884 "Star House." Medicine Park, opened in 1908 as a resort and health spa, was also an early version of a water-amusement park with slides, diving boards, and a pavilion. In Lawton, Doe Doe Park hosted the city's leisure-time activities for five decades. Opened in August 1945, Doe Doe offered a large swimming pool, a wooden skating rink, rides, a zoo, and concessions. Through the years it closed down facet by facet, until operations ceased in 1985.

In towns all across the state, natural and man-made lakes hosted amusement and recreation areas. Some offered rides, others concentrated on swimming, boating, dances, and concessions. In 1907 the Enid City Railway Company planned Lakewood Electric Park on an artificial lake; it would eventually contain a bowling alley, pavilion, boathouse, scenic railway, and other varied amusements. This scene was repeated in communities like Okmulgee (Lake Park and Douglas Park), Muskogee (Hyde Park), and Woodward (Crystal Beach Park). Capitalizing on the traffic of Route 66, Dixieland Park in Sapulpa entertained guests with a large pool and skating rink from 1927 until 1951. In Oklahoma City during the late 1930s and early 1940s the African American community traveled to Lyons Park near Arcadia to swim, dance in a pavilion, and attend traveling carnivals.

Toward the end of the twentieth century amusement parks had to compete with several new entertainment genres. Arcades, child-oriented theme restaurants that included small rides and games, water parks, shopping malls, and cable television syphoned away the traditional customers. The older attractions, movie theaters, fairs, and sporting events, still drew customers as well. Although few of them have survived in Oklahoma, there will always be a niche for amusement parks and the exhilarating rides and wholesome entertainment they provide.

The following (as per The Chicago Manual of Style, 17th edition) is the preferred citation for articles:
Larry O'Dell, “Amusement Parks,” The Encyclopedia of Oklahoma History and Culture, https://www.okhistory.org/publications/enc/entry?entry=AM018.