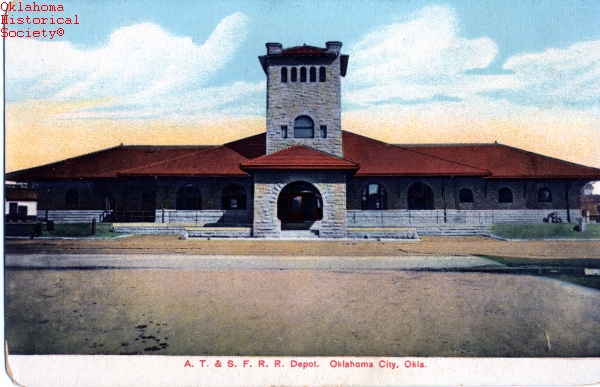 This now-famous company, which began modestly in Kansas in 1859 as the Atchison and Topeka, was reorganized under the grander title in 1870. Originally building westward through Kansas and across Raton Pass into New Mexico, it had reached San Diego and Los Angeles by 1887. On the eastern end, it reached Chicago in 1887, making the Atchison, Topeka and Santa Fe (AT&SF) into a true transcontinental railroad. At this time it also had its eye on Texas. Two nominally independent companies, the Southern Kansas (of Kansas, 1885) and the Gulf, Colorado and Santa Fe (1873), both controlled by the Santa Fe, completed a north-south main line through Oklahoma to Purcell in 1887. The same Southern Kansas in 1886–87 also constructed a line from Kiowa, Kansas, through Woodward to Goodwin and on to Amarillo, Texas, giving the Santa Fe a shortcut to its western lines. In 1890 the Santa Fe also acquired the St. Louis and San Francisco (SL&SF), but this was to be of short duration. All this expansion led to a receivership in 1893. The company was reorganized by 1896 and came out stronger, but the control of the SL&SF had to be given up.

During the boom years in Oklahoma an alternative main line was obtained from Newkirk through Cushing and Shawnee to Pauls Valley, where it rejoined the original line. Another subsidiary, the Eastern Oklahoma, constructed this railroad between 1900 and 1904, but the Santa Fe worked it from the outset. Numerous branches, chiefly promoted by nominally independent companies, were added to the network. The more important ones were the Kansas, Oklahoma Central and Southwestern, taken over in 1900, with a line from Owen to Owasso and Tulsa, and the Oklahoma Central, with a railroad from Lehigh to Chickasha by way of Purcell. In the Panhandle, the Southern Kansas Railway (of Texas, in 1914 renamed Panhandle and Santa Fe) built several lines around Boise City with connections into Kansas and Texas, but the Santa Fe worked the lines from the very beginning. Another major acquisition (1928) was the Kansas City, Mexico and Orient, with its line from Waldron (Kansas) through Fairview, Clinton, and Altus into Texas.

In this way, a dense network of main and branch lines covered Oklahoma. Altogether, some 1,500 miles connected most of the oil fields with the outside world and provided transportation for agriculture and industry. Most of the Santa Fe main lines are still in use today. Only the old Eastern Oklahoma line, Newkirk-Shawnee-Pauls Valley, and the Oklahoma Central lines, together with some branches elsewhere, have been abandoned. Since 1997 the Santa Fe has been part of the giant Burlington Northern Santa Fe system, which also includes the old St. Louis and San Francisco.

A Santa Fe specialty was its system of Harvey Houses. Most railroad eating houses, especially in the West, had a well-deserved bad name. This was to change in 1876 when an Englishman, Fred Harvey, leased the dining room in the Santa Fe's Topeka depot. He insisted on providing good food and excellent service in clean surroundings, and success was instantaneous. The Santa Fe asked him to open other dining rooms along its lines, and hotels and dining cars followed. As servants Harvey hired only young women of irreproachable morals, and the girls were supervised by stern matrons. The impact these "Harvey Girls" made on the still rather uncivilized western places was twofold. Not only did westerners learn the pleasure of eating excellent food in nice restaurants, but these decent girls were also in high demand as marriage partners. Consequently, their turnover rate was high although they had to promise not to marry for at least one year upon entering Harvey's service. In many of its stations in Oklahoma, even smaller ones such as Purcell, the Santa Fe operated Harvey restaurants or lunch counters.

The following (as per The Chicago Manual of Style, 17th edition) is the preferred citation for articles:
Augustus J. Veenendaal, Jr., “Atchison, Topeka and Santa Fe Railway,” The Encyclopedia of Oklahoma History and Culture, https://www.okhistory.org/publications/enc/entry.php?entry=AT001.