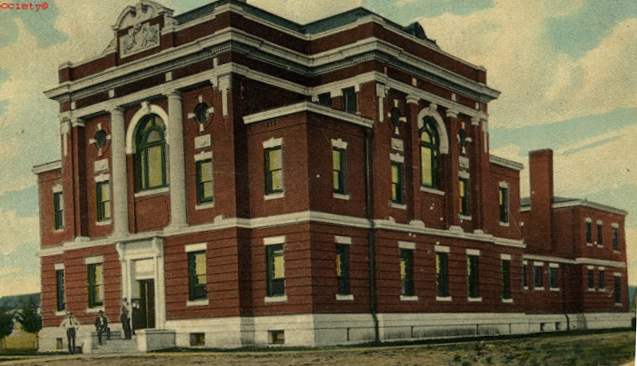 Located in west-central Oklahoma, Caddo County is bordered on the north by Blaine and Canadian counties, on the east by Grady County, on the south by Comanche County, and on the west by Kiowa, Washita, and Custer counties. Most of Caddo County is situated in the Gypsum Hills and Red Bed Plains physiographic regions with the exception of the far southwestern corner, which lies in the Wichita Mountains region. Comprised of 1,290.31 square miles of land and water, the county is drained by the Washita River and various creeks such as Sugar and Pond. The Canadian River passes through the northeastern corner of Caddo County. Streams have cut deep canyons such as Red Rock Canyon near Hinton and Devil's Canyon near Lookeba. Outcrops south of Hydro are known as the Twin Mounds, Ghost Mound, Dead Woman Mound, and Rock Mary. In 2010 the incorporated towns included Anadarko (the county seat), Apache, Binger, Bridgeport, Carnegie, Cement, Cyril, Eakly, Fort Cobb, Gracemont, Hinton, Hydro, and Lookeba.

At the turn of the twenty-first century Caddo County had 451 reported archaeological sites, and 180 of them had been identified to time period. One hundred fifteen of those sites relate to the Plains Village era (A.D. 1000 to 1500). The Domebo Canyon Site, where a Columbian mammoth had been killed approximately 11,000 years ago, is the most significant. In addition, the Caddo County Medicine Creek Archaeological District (NR 95000235) and the Stevens Rock Shelter (NR 95000237) were listed in the National Register of Historic Places in 1995.

Between the 1830s and 1850s expeditions passed through the area. In 1834 the Dodge-Leavenworth Expedition traveled through present Caddo County, crossing the Washita River on its march back to Fort Gibson. Nine years later Nathan Boone led a reconnaissance that went northwest from Fort Gibson through northern Oklahoma to the 98th and 99th Meridians before turning south and following the Canadian River back to the fort. In 1849 gold seekers going to California used the southern branch of the California Road, which passed through Indian Territory. Emigrant parties left Fort Smith and Van Buren, Arkansas, and traveled the Californian Road, which basically ran parallel to the Canadian River. Rock Mary, one of the landmarks along that road, is situated in present Caddo County. In 1853 the Whipple Expedition commenced from Fort Smith and crossed Indian Territory by following a route south of the Canadian River.

Caddo County was organized on August 6, 1901, when the area was opened by lottery to non-Indian settlers. According to historian George Shirk, the county is named for the Caddo tribe, and the word stems from kaadi, meaning "chief." Caddo County lost area to Grady County at 1907 statehood and in 1911. Initially, county government was administered under a tent on the courthouse square in Anadarko. Late in 1901 a one-story, wood-frame building was erected. A second story was added in 1902. That year construction started on a three-story, brick courthouse, which served the county until Barbour and Short Company built a two-story structure in 1958.

In addition to agriculture, the petroleum industry has supplemented the economy. At Cement oil fields were discovered in 1911, and by 1924 that field had one hundred producing wells. In the 1930s the Magnolia Oil Corporation was the largest company in the Cement area. The Anderson-Pritchard Refinery Company in Cyril stored the oil output from the Cement field. In the early 1930s Anadarko had six oil service businesses. Brief economic boosts due to oil production came to Gracemont in the 1960s, to Carnegie and Lookeba in the 1970s, and to Hydro in the 1980s.

After the Great Depression ended, Pres. Franklin D. Roosevelt's New Deal programs put the unemployed back to work. Among the projects in Caddo County were a Civilian Conservation Corps camp near Binger and the construction of the Anadarko National Guard Armory. The armory (NR 94000479) was added to the National Register of Historic Places in 1994.

The earliest transportation routes in Caddo County included the California Road and military roads such as the route from Camp Supply to Fort Sill. At the turn of the twentieth century the Chicago, Rock Island and Pacific (CRI&P) Railway had two lines in Caddo County. One line traversed the county in a north-south direction and passed through Bridgeport, Hinton, Lookeba, Binger, Gracemont, Anadarko, and Apache. The line between Hinton and Anadarko was abandoned in 1939. The other CRI&P line passed through the county from east to west connecting Chickasha (Grady County), Anadarko, Fort Cobb, and Carnegie with southwestern Oklahoma. Between 1901 and 1903 the Oklahoma City and Western Railroad (later the St. Louis and San Francisco Railway) built a line from Chickasha to the Red River and through Cement and Cyril in southeastern Caddo County. Modern motorists use U.S. Highways 62, 277, and 281 and State Highways 8, 9, 19, 37, 58, 146, and 152.

The following (as per The Chicago Manual of Style, 17th edition) is the preferred citation for articles:
Linda D. Wilson, “Caddo County,” The Encyclopedia of Oklahoma History and Culture, https://www.okhistory.org/publications/enc/entry.php?entry=CA005.