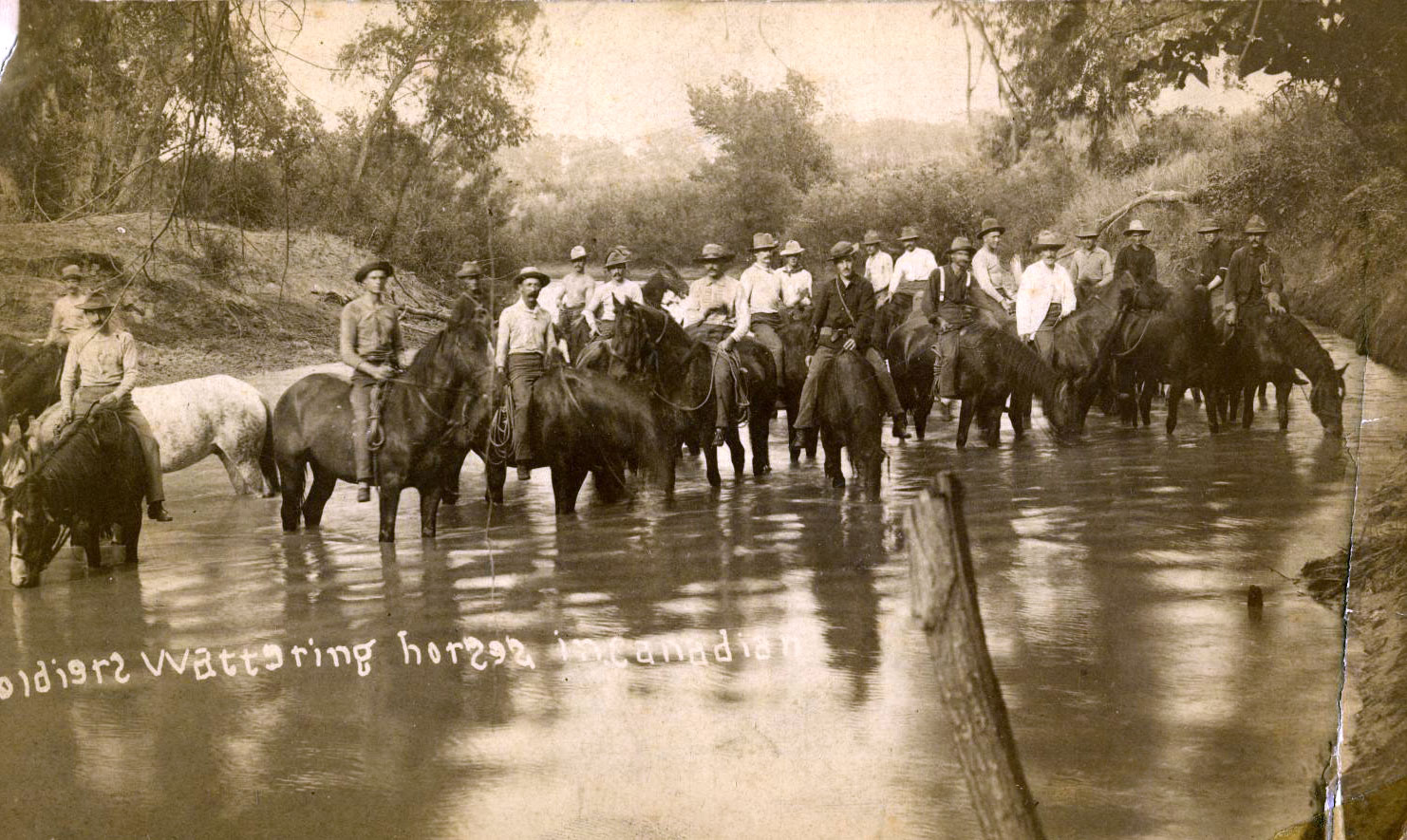 In Oklahoma generally called the "South" Canadian River, the Canadian was known to seventeenth- and eighteenth-century Spanish explorers as the Rio Buenaventura and the Magdalena. French explorers, perhaps assuming that the stream flowed northward into Canada, may have attached the name while they were seeking a route to Santa Fe. Part of the vast drainage system of the Arkansas River, the Canadian River rises in the Sangre de Cristo Mountains of New Mexico and Colorado at approximately 37˚01´ N, 105˚03´ W. Flowing generally southeast through northeastern New Mexico and east through the Texas Panhandle before entering present Oklahoma in Roger Mills and Ellis counties, the river courses 906 miles from its head to its confluence with the Arkansas River in Haskell County. The drainage system encompasses 47,700 square miles in the three states. Since 1907 the Canadian River has either passed through or formed a boundary between nineteen counties, including Ellis, Roger Mills, Dewey, Custer, Blaine, Canadian, Grady, Cleveland, McClain, Pottawatomie, Pontotoc, Seminole, Hughes, McIntosh, Pittsburg, Muskogee, Haskell, Sequoyah, and Le Flore.

The Canadian is a braided meandering stream fed by the North Canadian (Beaver), Little, and Deep Fork rivers and by numerous creeks. In passing through Oklahoma from west to east, the Canadian drains semi-deserts, plains, prairies, forests, and mountains. In western Oklahoma water is only intermittently present, but in the eastern portion the river runs, due to plentiful rainfall. The usually wide bed consists variously of shallow or deep sands and, in the middle and lower reaches, much quicksand.

Oklahoma's portion of the Canadian watershed was occupied and extensively used in the precontact era and in historic times by Native groups, including the Spiro peoples, followed by the Wichita near the river's confluence with the Arkansas in eastern Oklahoma, and the Plains Apache, followed by the Comanche and Kiowa in the plains of western Oklahoma.

As Euroamericans competed for wealth and land in the trans-Mississippi west, the Canadian River served as a virtual highway for international exploration and economic activity. At first it was the object of Spanish and French exploration. After New Mexico's Spanish governor Juan de Oñate followed the river onto Oklahoma's western plains in 1601, Spanish traders and buffalo hunters operated around the waterway. In 1719 French explorer Bénard de la Harpe reconnoitered from the Kiamichi Mountains to the mouth of the Canadian in eastern Oklahoma. In 1740 Pierre and Paul Mallet explored the river's entire length, followed in 1741 by Fabry de La Bruyere. This began a lengthy period of French trade with the Osage and Wichita.

After the United States acquired the Louisiana Purchase in 1803, American civilian and military explorers retraced the steps of the Spanish and French along the Canadian. Maj. Stephen H. Long concluded his 1821 expedition along the Canadian by declaring America's heartland to be the "Great American Desert." Nonetheless, traders set up stations along the river. Edwards's Post was erected at an earlier Spanish trading site at the mouth of Little River; there in 1834 Col. Henry Dodge's Dragoon Expedition to the Comanche and Kiowas established Camp Holmes and held a conference with Plains tribes. Chouteau's Trading Post was built in the Creek Nation near present Lexington. In 1839 Josiah Gregg led a trading party from Fort Smith along the Canadian to Santa Fe, subsequently publicizing the route in his 1844 book, Commerce of the Prairies. In 1843 Capt. Nathan Boone led dragoons up the Canadian to the 100th Meridian, at that time the United States' western border.

After the discovery of gold in California, in 1849 Capt. Randolph B. Marcy commanded troops that marked out the California Road from Fort Smith along the Canadian through Oklahoma, a route that was used extensively by emigrants until 1861. In 1853 Lt. Amiel W. Whipple of the U.S. Army Topographical Engineers explored a Canadian River route across Oklahoma for a transcontinental railroad. During the Civil War control of the California Road was contested by Union and Confederate troops.

During the nineteenth century the Canadian River also served as a geopolitical boundary marker. By an 1818 treaty the river served as the southern boundary of land ceded to the United States by the Quapaw; this boundary stood in an 1820 treaty in which the Choctaw received the land from the United States and in an 1825 treaty in which the Osage relinquished their claim to the same region. After 1830 the river formed the line between the Creek-Seminole lands on the north and the Choctaw-Chickasaw lands on the south, a situation that remained until after the Civil War. The Canadian formed the southern boundary of the Unassigned Lands from 1866 until that region's opening by the Land Run of 1889. Finally, the river formed part of the boundary of Oklahoma Territory until its union with Indian Territory in 1907 at statehood.

The following (as per The Chicago Manual of Style, 17th edition) is the preferred citation for articles:
Dianna Everett, “Canadian River,” The Encyclopedia of Oklahoma History and Culture, https://www.okhistory.org/publications/enc/entry.php?entry=CA039.