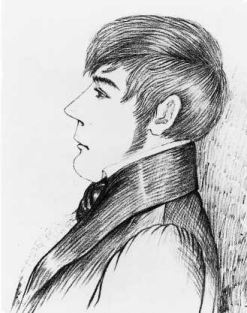 An important trader, government liaison to American Indian nations, and member of an illustrious Western frontier family, Auguste Pierre "A. P." Chouteau was the eldest son of Jean Pierre Chouteau, founder of one of the first permanent Euroamerican settlements in present Oklahoma. Auguste was born in St. Louis on May 9, 1786, and grew up learning the Chouteau family's fur trade business. He graduated from the United States Military Academy in 1806 and resigned his commission in 1807 in order to focus on the fur trade. Although his formal military experiences were limited, Chouteau was known as "Colonel" for the remainder of his life.

As a young man Chouteau participated in several trading expeditions that exposed him to various landscapes and American Indian cultures west of the Mississippi River. On an extended journey to the upper Arkansas River region with Jules DeMun in 1815–17, Chouteau was detained, his valuable trade goods confiscated, and his party temporarily imprisoned in Santa Fe by Spanish authorities. Although this incident did not deter him from continuing to develop his trading interests, for the remainder of his life he focused his efforts in present Oklahoma.

After returning from Santa Fe, Chouteau assisted in the operation of his father's trading post on the Neosho (Grand) River at present Salina, Oklahoma. The business received a boost in 1817 when he received (with partner Joseph Revoir) an exclusive license to trade with the Osage. He successfully expanded the family trading operation in the region and later constructed a new trading facility on the Verdigris River in the Three Forks area. Chouteau strengthened his trading network by engaging in activities such as encouraging Native people to migrate to the region in order to hunt additional fur-bearing animals and constructing boats that were used to ship furs (including beaver, bison, and deer) on the Verdigris to New Orleans.

By the mid-1820s Chouteau led the most influential trading operation in present Oklahoma. In 1822 he moved into an elaborate, two-story, log, dogtrot house known as "La Grande Saline" at present Salina, and from his residence he coordinated an extensive trading enterprise. Eventually, Chouteau's business was responsible for introducing approximately twenty thousand dollars of European trade goods into the Three Forks region each year. European goods (including textiles, jewelry, rope, knives, and guns) imported from New Orleans and St. Louis continued to be exchanged for pelts until increased human settlement and over-hunting reduced the supply of available Three Forks furs in the mid-1820s.

As Three Forks hunting declined and competition from other traders increased, Chouteau expanded trade in other regions of Indian Territory. By the mid-1830s he operated trading stations that extended into present central and southwestern Oklahoma. While some of his endeavors were successful, his debts increased in the 1820s and 1830s due to a series of poor business decisions.

In addition to his economic activities, Chouteau acted as an effective intermediary between the U.S. government and various Indian nations, including the Comanche, Delaware, Kiowa, Osage, and Wichita. For example, his efforts facilitated the signing of the first treaties between the federal government and the Comanche and Kiowa, and he was often solicited to diffuse tensions between various Indian tribes. Many American Indians, particularly members of the Osage and Comanche nations, trusted Chouteau's council and his ability to provide desired trade goods.

In 1809 Chouteau married Sophie Labbadie, his cousin and daughter of a successful St. Louis trader. Although they had ten children, their marriage was evidently strained. Sophie did not move to "La Grande Saline" with Auguste; she remained in St. Louis. Until Chouteau's death in 1838, the couple's only interaction occurred during Auguste's infrequent visits to St. Louis. To complicate matters, Chouteau likely had relationships with several Osage women and fathered at least one son by an Osage wife.

Reports in October 1838 stated that Chouteau was ill and not expected to recover. He died on December 25, 1838, at Fort Gibson, and after a military funeral, he was buried in the fort's cemetery. Although the cause of death is not certain, he had recently suffered an injured thigh that prevented him from riding. His assets were sold to creditors, and little evidence of Chouteau's trading operation in Indian Territory remained by spring 1839, although his influence upon the region was not quickly forgotten.

Harriette Johnson Westbrook, "The Chouteaus: Their Contributions to the History of the West, Part II," The Chronicles of Oklahoma 11 (September 1933).

The following (as per The Chicago Manual of Style, 17th edition) is the preferred citation for articles:
Douglas A. Hurt, “Chouteau, Auguste Pierre,” The Encyclopedia of Oklahoma History and Culture, https://www.okhistory.org/publications/enc/entry.php?entry=CH057.