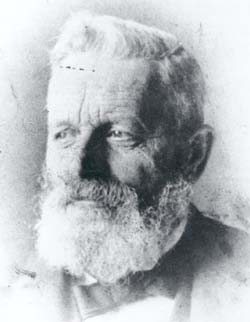 Cimarron Territory refers to the area that is now the Oklahoma Panhandle, a strip of land 34 miles wide and 169 miles long. In the 1880s a grassroots movement sought territorial status for Cimarron Territory. A provisional government would organize the territory, encourage homesteading, and bring statehood.

In 1885 the U.S. Supreme Court ruled that this strip of public land did not belong to the Cherokee Outlet; thus, open-range grazing ended, and settlers, mainly from Kansas, poured in. Most homesteaders settled near Beaver City, located on the Beaver River alongside the Jones and Plummer Trail. Because lawbreakers threatened citizens and property, settlers had difficulty holding claims. Serious obstacles included the lack of legitimate land titles and law. Without legal titles, settlers could not obtain bank loans. Reacting to such distress, U.S. Sen. D. W. Voorhees of Indiana introduced a bill attaching Cimarron Territory to Kansas. After it passed both houses of Congress, Pres. Grover Cleveland, under pressure to open the public lands in Indian Territory, let the bill die.

Therefore, thirty men from Beaver City, led by Dr. O. G. Chase, Dr. J. A. Overstreet, and J. C. Hodge, met on August 26, 1886, in order to register legitimate land claims and adjudicate disputes. Homesteaders paid one dollar and agreed to have claims investigated. They also proposed a territorial government. This move prompted concern, as some believed that only Congress could establish territorial governments and that political maneuvering would delay homesteaders' rightful claims.

By November a petition requested another meeting to create territorial government by electing three councilmen in February 1887. After its election this council repeatedly stated that the provisional government would become a state government—the State of Cimarron. Even so, any actions were largely symbolic; the representatives requested a territorial justice system and the implementation of mortgages, school bonds, road improvements, and taxation. The council even enlisted a hardware store owner to create a territorial seal. In addition, the council determined that citizens should elect a senate and house in November. These men met in December 1887 and drafted a petition to send to Washington, D.C., asking for a territorial government, a land office, a proper land survey, and a federal court. During the proceedings Chase was elected to represent the council in Washington.

However, not everyone concurred with the council's decisions. Overstreet, John Dale, and others convened their own meeting and elected their Washington representative—Dale. These two factions refused to acknowledge each other's legitimacy, and both Chase and Dale went to Washington as the "real" spokesperson. In December Rep. William M. Springer of Illinois delivered Chase's petition to the Fiftieth Congress. The petition proclaimed that Cimarron Territory had ten thousand residents who needed protection and who therefore had formed a provisional government. Congress tabled Chase's plea, and there, it died.

In 1888 the Strip faced even harder times. People became increasingly concerned with survival; political interest waned. Drought and crop failure plagued homesteaders, who could not secure funds to help themselves. Plans asking New Mexico Territory to annex it, or attaching it to a future Oklahoma Territory, collapsed. Regardless, a new territorial council convened. Believing that President Cleveland would help the cause, they created "An Act to Organize the Territory of Cimarron." It provided for an elected senate, house, and supreme court, provided for a presidentially appointed governor, secretary, justices, attorney, and marshal, placed the territorial seat at Beaver, and called for citizens' approval or disapproval.

This measure became Cimarron Territory's last gasp. Only thirteen of twenty-three elected legislators attended. Chase lost his enthusiasm and left the territory, so distillery owner L. M. Hubbard became council leader. The council proclaimed Territory of Cimarron a reality; it would try to attain congressional approval for the decision later. Groundswell efforts to create Cimarron Territory continued to evaporate. Still, the council reconvened for three days in March 1889, but few attended. They considered the Organization Act, discussed funding the election to adopt it, and argued about how to affix their signatures to the measure.

The opening of Oklahoma's Unassigned Lands in April 1889 signaled Cimarron Territory's death knell. With failed crops, bad weather, no secure property rights, no law, and most importantly, no broad-based, national support, the plan was doomed. In less than a year more than ten thousand of the region's fourteen thousand occupants had left. The remaining settlers finally found relief when the area became officially attached to Oklahoma Territory in May 1890, ending all hopes for Cimarron Territory.

Oscar A. Kinchen, "The Abortive Territory of Cimarron," The Chronicles of Oklahoma 23 (Autumn 1945).

The following (as per The Chicago Manual of Style, 17th edition) is the preferred citation for articles:
Sara Richter and Tom Lewis, “Cimarron Territory,” The Encyclopedia of Oklahoma History and Culture, https://www.okhistory.org/publications/enc/entry.php?entry=CI005.