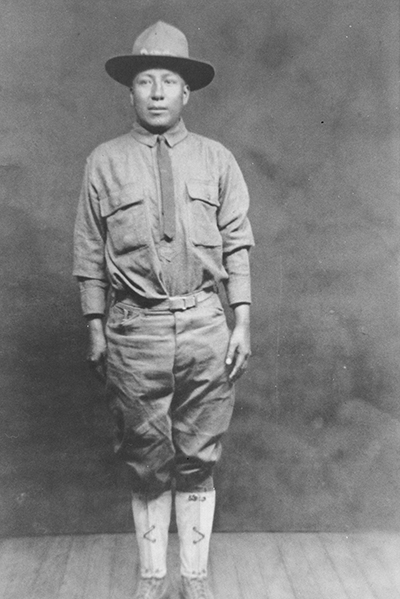 Oklahoma Indians have the distinction of being the first American Indian code talkers in both World Wars. Two forms of American Indian Code Talking exist: Type One or intentionally encoded native languages, and Type Two or noncoded native languages. While the former served as a foreign and coded language form usually with organized training, the latter served only as a foreign language and in impromptu situations. Among Oklahoma Indians only the Choctaw in World War I and the Comanche in World War II are known to have served as Type One code talkers.

The first code talkers were a group of Choctaws in the 141st, 142d, and 143d Infantry Regiments of the Thirty-sixth Infantry Division in World War I. During the Meuse-Argonne campaign of 1918 in France, Germans broke Allied communication codes, monitored radio and telephone lines, and captured one of every four runners between companies. Needing a more secure means of communication, an American army officer overheard some Choctaw soldiers conversing in their native language.

After an initial test and brief training in telephone messages, a Choctaw was placed in each post command. Coded words were soon devised for military terms foreign to the Choctaw language. For instance, "little gun shoot fast" meant machine gun. Choctaw messages transmitted by field telephone and in writing led to major successes in the battles of St. Etienne and Forest Ferme, contributing to the war's end.

Thirteen Comanche Code Talkers landed at Utah Beach during the Normandy invasion in France. Maintaining wire telephone lines and sending secure messages via field telephone and radio, they served in France, Luxembourg, Belgium, and Germany. Their service included important battles at Cherbourg, St. Lo, Paris, the Siegfried Line, the Huertgen Forest, and Bastogne. Although several were wounded in action, none were killed. The Comanche code was never broken.

During World War II most American Indians enlisted for a complex combination of traditional cultural (warrior-based themes), acculturative (boarding school), and economic (unemployment) reasons, and out of tribal and national patriotism. Their desire to serve as a unit and their ability to provide a unique form of military communications provided additional motivations for the Indian Code Talkers.

The following (as per The Chicago Manual of Style, 17th edition) is the preferred citation for articles:
William C. Meadows, “Code Talkers,” The Encyclopedia of Oklahoma History and Culture, https://www.okhistory.org/publications/enc/entry.php?entry=CO013.