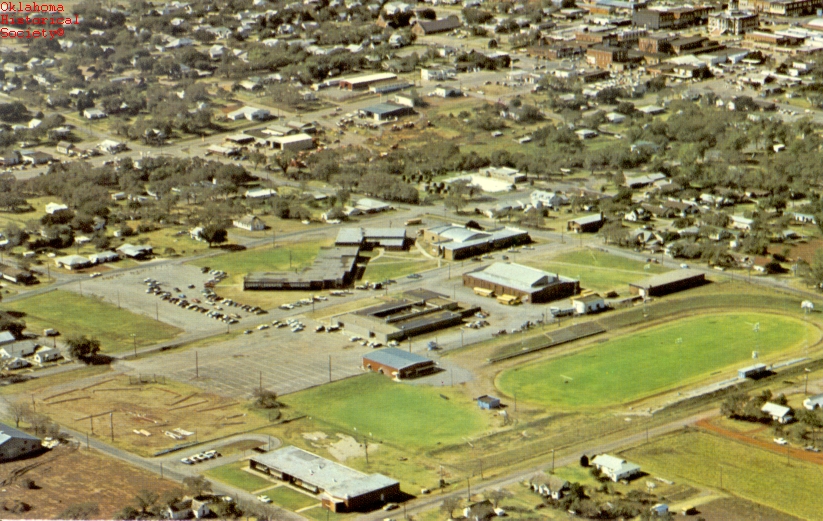 The Washita County seat, Cordell is located at the junction of U.S. Highway 183 and State Highway 152. Shortly after the 1892 Cheyenne and Arapaho Opening, which offered the region for non-Indian settlement, H. D. Young founded Cordell when he opened his general merchandise store on a site located approximately one and one-half miles northeast of the present town. That same year the U.S. Post Office Department established the original post office at Young's business. The name honors Wayne W. Cordell, a longtime postal employee in Washington, D.C.

In 1897 A. J. Johnson and J. C. Harrel enticed Young to move his store and post office from Old Cordell, with a population of 250, to the location of the present city of New Cordell. The quality and availability of the water attracted many residents to the new site. Johnson and Harrel had managed to arrange an election to remove the county seat from Cloud Chief, located in the county's southeastern corner, to New Cordell, located in the center. Washita's citizens voted 1,383 to 287 in favor of relocating the seat. In August 1900 the move was made. However, it was deemed illegal, as only the U.S. Congress can establish the county seat in a territory, which Oklahoma was at the time. Considerable legal haggling lasted for approximately five years. In the meantime, Cordell constructed a new two-story courthouse. In 1904 the Oklahoma Territory Supreme Court ruled that the county seat must return to Cloud Chief. However, a Cordell attorney, Sam Massingale, who later became a congressman, secured a stay, traveled to Washington, D.C., and lobbied a bill through the Congress in 1906, officially naming Cordell the county seat. In 1902 Cordell won a hard-fought battle and secured the Blackwell, Enid and Southern Railroad for the community. The railroad soon became the St. Louis and San Francisco Railway, commonly known as the Frisco, and continued operation into the twenty-first century.

In 1909 a mysterious fire destroyed the Washita County Courthouse. A term of court had been scheduled for Monday, August 7, hearing cases on forty-four illegal whiskey charges, seven cattle thefts, and the six horse thefts. The fire started in the courtroom on Friday night, August 4. County officials selected Solomon Andrew Layton, of Layton, Wemyss Smith, and Hawk, as the architect for the new courthouse, which was completed in 1911. Layton later served as the architect of the Oklahoma Capitol building. The Washita County courthouse, listed in the National Register of Historic Places (NR 84003452), was designated by former Gov. George Nigh as "the godfather of all courthouses in the state of Oklahoma."

The Cordell public school system was established in 1899. From 1907 until 1911 many considered the town an educational center because three institutions offered a high school diploma: Cordell Public School, Cordell Christian College, and Cordell Academy. In 1900 the Cordell Beacon moved to the town from Cloud Chief and reported the news through the twentieth century and into the twenty-first. A 1910 population of 1,950 climbed to 2,936 by 1930.

The 1940 census listed Cordell's population as 2,776. In the late 1940s, during the tenure of the Burns Flat Naval Base, the number grew to 2,920 in 1950. The population peak was 3,589 in 1960. It slowly declined to 3,301 in 1980 and 2,903 in 1990. Cordell remained an agricultural marketing and production hub and as a regional financial center supported six operating banks at the end of the twentieth century. The community is home to ten churches as well as two retirement centers. In 1999 Cordell won the Great American Main Street award, which is given to five American cities every year. The Carnegie Library (NR 89001966) and the New Cordell Courthouse Square Historic District (NR 98001592) are listed in the National Register of Historic Places. The 2000 population was 2,867, and in 2010 the U.S. Census recorded 2,915.

The following (as per The Chicago Manual of Style, 17th edition) is the preferred citation for articles:
Wayne Boothe, “Cordell,” The Encyclopedia of Oklahoma History and Culture, https://www.okhistory.org/publications/enc/entry.php?entry=CO082.