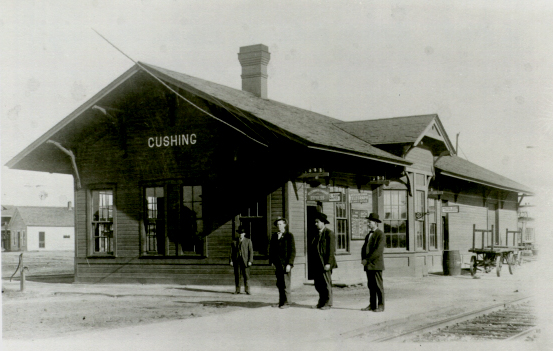 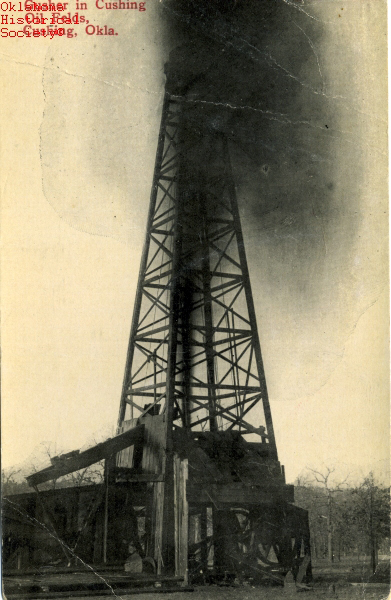 The town of Cushing is located in Payne County at the intersection of State Highways 33 and 18, sixty-nine miles northeast of Oklahoma City. The area was part of the Sac and Fox Reservation and included in grazing land leased by the Michigan-owned Turkey Track Ranch, with headquarters eleven miles north of the future townsite. Cushing's formal history began with the land run of September 22, 1891, into the Sac and Fox Reservation. Even before the run, William (Billy Rae) Little had chosen a site on which he hoped to establish a new town. He had been a government trader for the tribe and knew the country well. After the run, he built a house to establish his claim and then laid out town lots.

A post office was established on November 10, 1891, and the town was named for Marshall Cushing, private secretary to U.S. Postmaster General John Wanamaker. Soon four cotton companies were operating in Cushing, and at the turn of the century the town boasted two grain elevators, three lumberyards, five hotels, eight general stores, six blacksmith shops, and five saloons. Most of the buildings were aligned on Main Street. Agriculture, particularly cotton farming, was the mainstay of the local economy. The 1900 population was 226.

The building of the Eastern Oklahoma Railway (a division of the Atchison, Topeka, and Santa Fe Railway) line to Cushing in 1902 brought both joy and turmoil. Postmaster Jacob Puckett and Lawrence Hay opened a new addition near the depot, and on the night of September 13, 1902, they loaded the frame post office on skids and moved it from Main Street to their new addition, about one-half mile away. The street with the depot and post office became Broadway, and a new Cushing began. The Missouri, Kansas and Texas Railway (MK&T, or Katy) added service on its own line built in 1903. By 1910 Cushing had grown to 1,072 inhabitants.

The town's most exciting era began on March 17, 1912, when an oil boom began. Wildcatter Thomas B. Slick brought in a gusher on the Frank M. Wheeler farm nine miles east of town. Word quickly spread, and explorers and oil workers rushed to the area. Wells were drilled everywhere, and of the first forty-six, only one proved a dry hole. This was the beginning of the Cushing-Drumright Field.

Cushing was unprepared for the mass invasion. All varieties of people, from millionaires to criminals, workers to hoboes, arrived. Oil workers rented rooms in shifts, and some slept in chairs or on pool tables. An estimated 276 wagons carried them to and from the field.

Production centered on the new town of Drumright, and Cushing became a refining center. Consumers Oil Company opened the town's first refinery in 1913. Eventually, twenty-three oil companies and five oil-field supply houses located there. The boom lasted until March 1915, when the field produced 8.3 million barrels of oil. Then a sudden decline began, and by the end of 1916 production decreased by more than 50 percent. Nevertheless, sixteen companies still operated there in 1930. In 1920 the town's population reached 6,326, and ten years later it reached 9,301, its largest ever. By 1940, however, 1,500 residents had left, and only three refineries were active. The town had 8,619 residents in 1960 and 7,529 in 1970.

The 1970s and 1980s brought economic crises. Cushing's last two major refineries, Kerr-McGee and Hudson, closed, rail service ended in 1982, and major retail stores closed. The town retained a great asset in the Shell pipeline terminal, which employed about 150 workers. The terminal consisted of thirty-nine storage tanks and pipelines that could move as much as 1.5 million barrels a day. This enhanced Cushing's status as "Pipeline Crossroads of the World." A minimum-security prison employing more than two hundred opened in 1997. The 2000 census recorded a population of 8,371, a gain of more than one thousand since 1990. Cushing maintained a commission-manager type of government in the year 2002. The 2010 U.S. Census tallied 7,826 living there.

The following (as per The Chicago Manual of Style, 17th edition) is the preferred citation for articles:
D. Earl Newsom, “Cushing,” The Encyclopedia of Oklahoma History and Culture, https://www.okhistory.org/publications/enc/entry.php?entry=CU007.