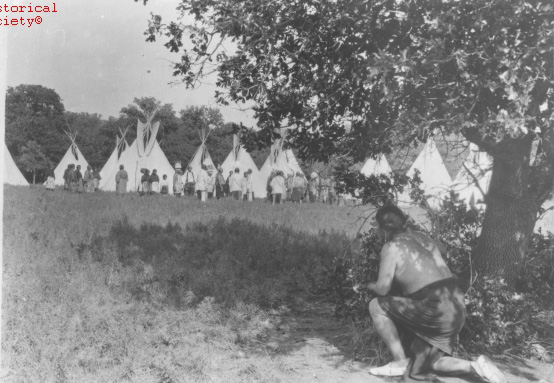 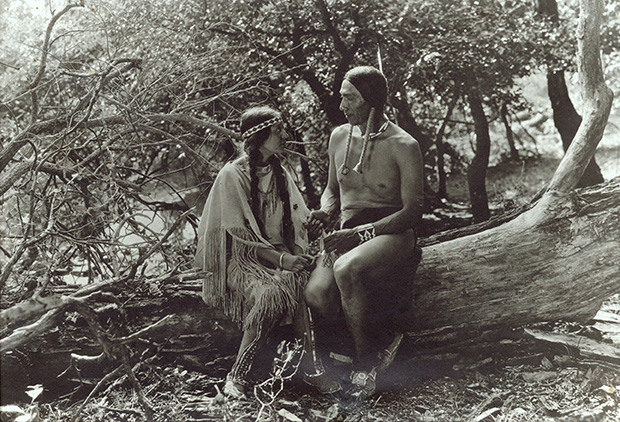 Scene from The Daughter of Dawn
(8684, Frank Rush Collection, OHS).


DAUGHTER OF DAWN, THE.

In 1920 the Texas Film Company, an independent film group, came to Lawton, Oklahoma, to produce a full-length silent motion-picture feature called The Daughter of Dawn. The film's entire cast was comprised of American Indians, mostly Kiowa and Comanche. One of the actors was White Parker, son of Comanche Chief Quanah Parker. The Daughter of Dawn had disappeared shortly after it was made and was thought to be lost. But in 2004 a 35mm nitrate copy surfaced in private hands and is now preserved at the Oklahoma Historical Society (OHS). Discovery of a lost silent film has international importance. The Library of Congress estimates that approximately 10 percent of films from the 1910s and 20 percent from the 1920s survive in complete form.

In this film, Dawn, played by Esther LeBarre, is the daughter of the chief, played by Hunting Horse. Two young tribe members, White, played by White Parker, and Wolf, played by Jack Sankeydoty, want to marry Dawn. The story progresses through a buffalo hunt, a horse raid by another tribe, and eventually a raid by the other tribe for women captives. As the story unfolds, Red Wing, played by Wanada Parker, falls in love with Wolf and follows him everywhere. Unfortunately for Red Wing, Wolf is oblivious to her attentions because he loves Dawn, who reciprocates his affection. The chief, however, says that because Wolf has many ponies he and White must both be considered as Dawn's potential husband. The script presents a classic love triangle with an unrequited love added for good measure.

In 1920 the producers selected the Wichita Mountains Wildlife Refuge near Lawton, Oklahoma, selected as the filming location. Richard Banks, who had founded the Texas Film Company in 1916, brought in Norbert Myles to write a script based on an old Comanche legend and to direct the filming. Banks had met Myles on a movie set in 1916. Myles was an actor in his own right; between 1913 and 1933 he appeared in fifty-eight films, wrote scripts for two, and directed three.

The film arrived at the Oklahoma Historical Society in late January 2007, and the process of restoration began. Working with the National Film Preservation Foundation (NFPF), OHS was advised to send the movie to Film Technology Company's lab in Hollywood, California, for evaluation and an estimate of restoration costs. On May 30, 2007, NFPF awarded OHS a matching grant of $16,510 for preservation of The Daughter of Dawn.

American Indian historians and curators at OHS conducted research to document the film's historical significance and add knowledge of the artifacts used as props. One project researched the film's actors' family connections. One actor, Hunting Horse, had already been identified as having three families that branched from him. Other actors' connections were established to Chief Quanah Parker.

After a rough copy of the initial film transfer arrived from Hollywood, the curators discovered that the Oklahoma Historical Society owned the tipi that was used in the film. An amazing and culturally significant object, in 1916 it had been under the care of Charlie Buffalo, brother of artist Silver Horn. The tipi has battle drawings, some painted by known American Indian artists, one of whom was Stephen Mopope, one of the Kiowa Five.

Silent films were usually accompanied by music to set the scenes and moods, and to continue that tradition OHS secured the creative services of David Yeagley, a Comanche who was a classical composer. He worked on a composition for a year, writing it all by hand and working with a stop watch to synchronize it with the movie frames. He composed music for each scene, added special music for various characters, and then brought it all together for a complete score. In the summer 2010, through the participation of Judge Robert Henry, recently named president of Oklahoma City University (OCU), the university agreed to commit its School of Music to playing and recording the composition. During 2011–12 the performance was recorded for presentation with the film on DVDs, with proceeds to be divided evenly between OHS and OCU. In 2012 The Daughter of Dawn re-emerged into the world of entertainment, some ninety years after its creation.

The following (as per The Chicago Manual of Style, 17th edition) is the preferred citation for articles:
Bill Moore, “The Daughter of Dawn,” The Encyclopedia of Oklahoma History and Culture, https://www.okhistory.org/publications/enc/entry.php?entry=DA020.