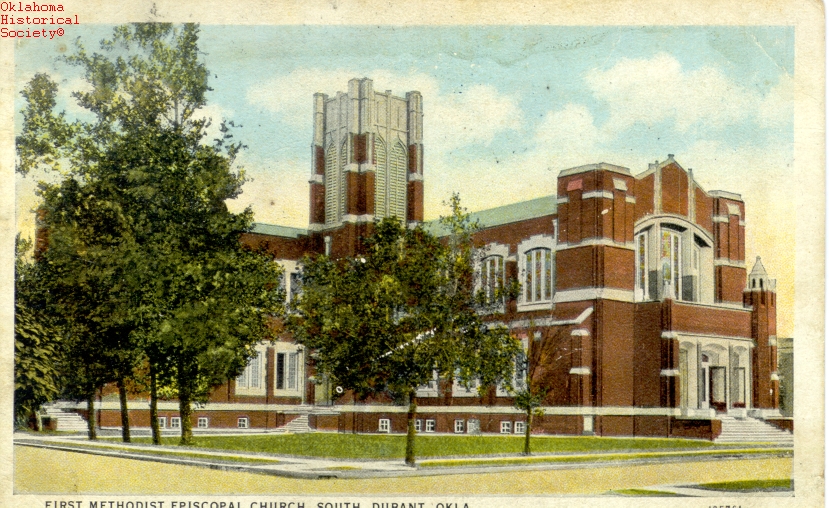 The seat of Bryan County and located in its western quarter, Durant is situated at the intersection of U.S. Highways 69/75 and 70, fifty-two miles east of Ardmore and seventy-six miles southwest of McAlester. Occupation of the townsite began in November 1872 when a wheelless boxcar was placed on the east side of the Missouri, Kansas and Texas Railway tracks. In 1873 Dixon Durant erected the town's first building, a wooden store, on the east side of the boxcar. Named "Durant Station" for his family, it was shortened to Durant in 1882.

Since the first settlers came to the area, agriculture has remained the town's economic base. The primary commercial crops were peanuts, cotton, wheat, and cattle. By 1902 there were eight churches, sixteen groceries, sixteen physicians, five hotels, fifteen attorneys, an ice plant, and numerous other businesses. Growth continued rapidly, due to a rapid influx of mixed-blood Choctaws and whites. Very few full bloods lived in Bryan County at the time.

In 1999 the state legislature proclaimed Durant "the Magnolia Capital of Oklahoma," and the town annually hosts a Magnolia Festival the weekend following Memorial Day. Oklahoma Gov. Robert L. Williams resided in Durant. In 1975 Chief David Gardner located the headquarters of the Choctaw Nation in the former Oklahoma Presbyterian College buildings. At the beginning of the twenty-first century Durant continued to grow with wholesale, retail, and light-manufacturing businesses supported by one of the top-ranked public school systems in the state.

The following (as per The Chicago Manual of Style, 17th edition) is the preferred citation for articles:
Keith L. Milligan, “Durant,” The Encyclopedia of Oklahoma History and Culture, https://www.okhistory.org/publications/enc/entry.php?entry=DU010.