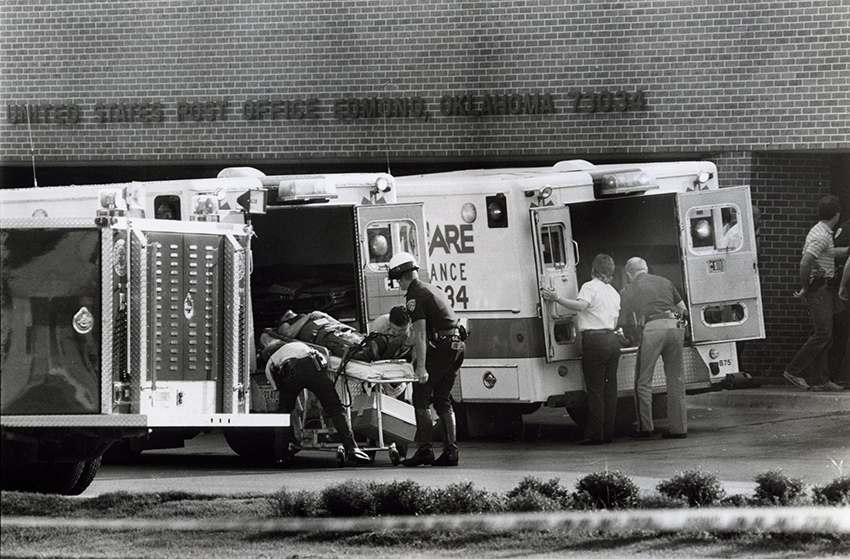 No strangers to large-scale episodes of violence, Oklahomans have endured collective and individual events ranging from the 1868 Battle of the Washita to the 1995 Oklahoma City Bombing. The event that occurred on August 20, 1986, at the United States Post Office in Edmond was, at that time, the state's largest and the nation's third-largest mass murder committed by a single individual in a single incident (the Federal Bureau of Investigation officially defines mass murder as murder of a minimum of four victims by a single person in a single incident).

USPS letter carrier Patrick H. Sherrill, a "disgruntled postal worker," fit the profile of a potential mass killer. A socially inept loner, he was unable to hold a job for long and blamed management for his problems. His fascination with guns was fed by service in the U.S. Marines and active participation in the Oklahoma Air National Guard, in which he became a small-arms expert. Frustrated at being formally disciplined by his postal supervisor several times, Sherrill had on two occasions threatened revenge. After receiving a reprimand on August 19, he reported to work on the morning of August 20 armed with three semiautomatic pistols and ammunition. He entered the facility, shot his supervisor to death, and tracked his co-workers through the building, killing fourteen and wounding six. He then killed himself.

In 1987 a seven-thousand-page U.S. Postal Inspector's Report analyzed the Edmond tragedy, and a one-day congressional hearing allowed the survivors and families a brief forum on March 18, 1987. Each concluded that measures should have been in place to profile Sherrill and prevent his hiring and to apply occupational health and safety standards and federal regulations to postal facilities.

No words can assess or mitigate the shooting's terrible impact on the victims and their families. Emotional and physical recoveries were slow, but sure. To honor the dead and the survivors, in 1989 the community of Edmond and the U.S. Postal Service placed a large memorial on the grounds of the Edmond Post Office. Sculptor Richard Muno depicted a standing man and woman holding a yellow ribbon; they are surrounded by fourteen fountains, one for each victim. The inscription lists them: "Patricia Ann Chambers, Judy Stephens Denney, Richard C. Esser, Jr., Patricia A. Gabbard, Jonna Ruth Gragert, Patty Jean Husband, Betty Ann Jared, William F. Miller, Kenneth W. Morey, Leroy Orrin Phillips, Jerry Ralph Pyle, Paul Michael Rockne, Thomas Wade Shader, Jr., Patti Lou Welch."

The Edmond incident was one of fifteen homicide incidents by postal employees from 1986 through 1999 in which thirty-four postal workers and six nonemployees were killed. In turn, these spawned numerous workplace-violence studies by criminologists, psychiatrists, and federal agencies. New hiring, employee management, and safety practices did result, and federal law concerning homicide against federal employees was expanded in 1996 (after the 1995 Oklahoma City Bombing) to include all federal employees.

In perspective, by the year 2000 workplace violence took the lives of an average of one thousand persons per year, in all workplace environments. Of those, only .2 percent (two-tenths of one percent) of incidents involved postal workers. It is ironic and unfortunate that at the end of the twentieth century the Edmond Post Office Massacre was most often remembered for instigating the use of the term "going postal" to describe workplace violence in general.

The following (as per The Chicago Manual of Style, 17th edition) is the preferred citation for articles:
Dianna Everett, “Edmond Post Office Massacre,” The Encyclopedia of Oklahoma History and Culture, https://www.okhistory.org/publications/enc/entry.php?entry=ED003.