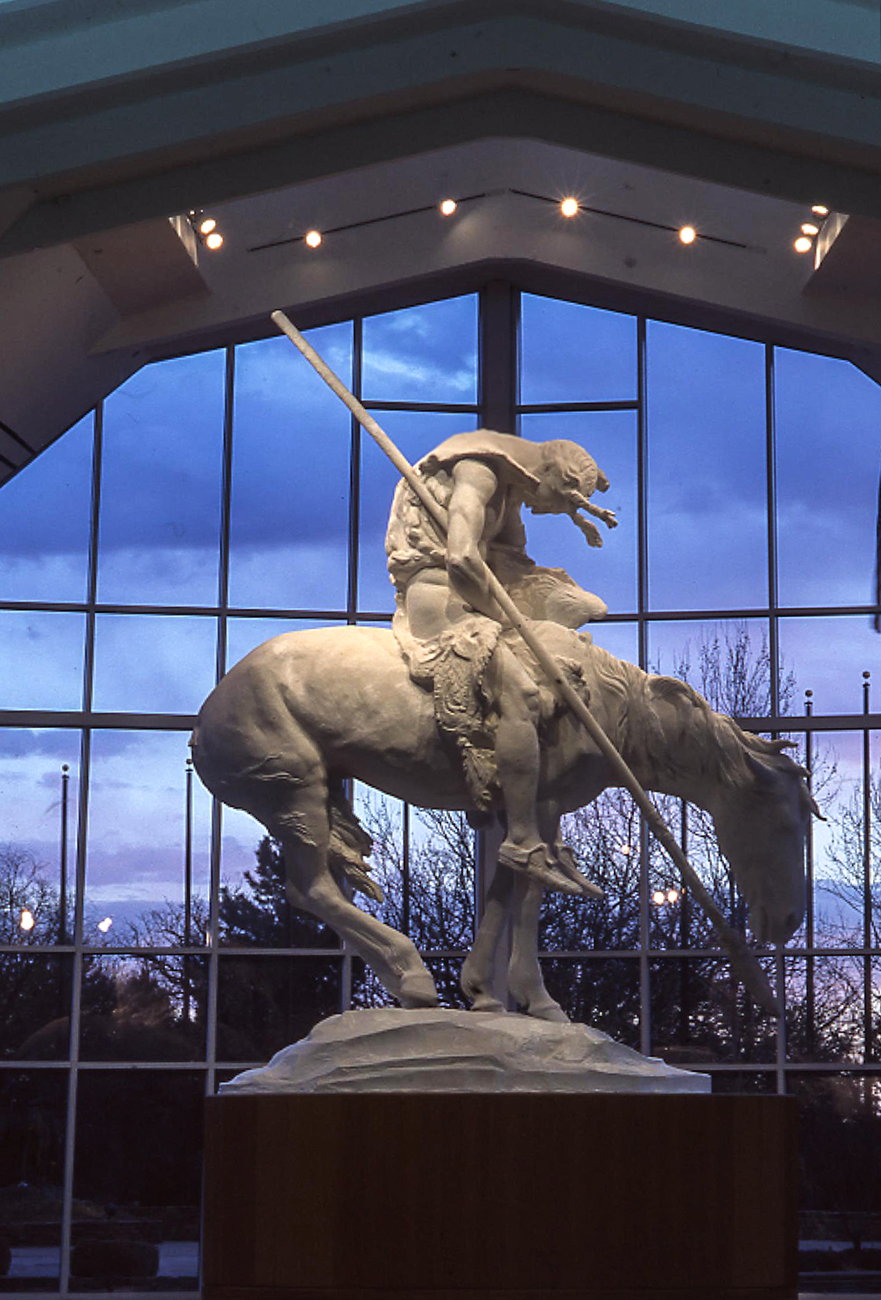 END OF THE TRAIL.

Created by American-born sculptor James Earle Fraser (1876–1953), End of the Trail, a representation of an American Indian on horseback, has endured to become one of the most recognizable images in the United States. Fraser was born in Winona, Minnesota, and spent much of his childhood growing up on the Great Plains in Mitchell, South Dakota. The family later moved to Chicago, and Fraser attended the Art Institute. In 1893 Fraser assisted with installations at the World's Colombian Exposition (World's Fair) in Chicago. Inspired by numerous exhibits depicting the American Indian and by his childhood memories, he created the original bronze version of End of the Trail in 1894.

In 1897 Fraser left the United States to study abroad. He took his bronze piece with him, and in 1898 he won the John Wanamaker prize at the American Artists Association exhibition in Paris. The prestigious award earned the young art student the opportunity to study at the École des Beaux-Arts in Paris. In addition, he became an assistant to renowned sculptor Augustus Saint-Gaudens.

After returning to the United States in 1900, Fraser reworked his End of the Trail sculpture numerous times in preparation for an eighteen-foot-tall monumental version of the work created in plaster exclusively for the 1915 Panama-Pacific International Exposition in San Francisco, California. From 1912 to 1913 Chief John Big Tree of the Seneca tribe served as a model in Fraser's New York studio, posing for End of the Trail as well as for the famed "buffalo" nickel.

Following the conclusion of the exposition, the artist wished to have his work cast in bronze. However, when the United States entered into World War I in 1917, bronze became very scarce, and the majority of sculptures that had been exhibited at the expo were deposited into a mud pit in Marina Park. Fraser made several attempts to locate his sculpture in order to obtain a copyright for the image and to cast the work in bronze. His attempts were unsuccessful, and he assumed the piece to be destroyed. In the meantime, residents of Tulare County, California, rescued and restored it and placed it in Mooney Grove Park in Visalia, California.

In 1967 the National Cowboy Hall of Fame (now National Cowboy and Western Heritage Museum) in Oklahoma City acquired Fraser's studio collection. In 1968 Dean Krakel, the museum's director, traveled to California to acquire the plasterwork. It was removed from Mooney Grove Park and taken to Oklahoma City. In return, Krakel planned for a bronze casting of the sculpture to be returned to the park.

Over the course of his career Fraser created numerous other sculptures, including several smaller bronze castings of End of the Trail. The 1915 version remains on exhibit at the National Cowboy and Western Heritage Museum in Oklahoma City, Oklahoma.

Dean Krakel, End of the Trail: The Odyssey of a Statue (Norman: University of Oklahoma Press, 1973).

The following (as per The Chicago Manual of Style, 17th edition) is the preferred citation for articles:
Chandra Boyd, “End of the Trail,” The Encyclopedia of Oklahoma History and Culture, https://www.okhistory.org/publications/enc/entry.php?entry=EN002.