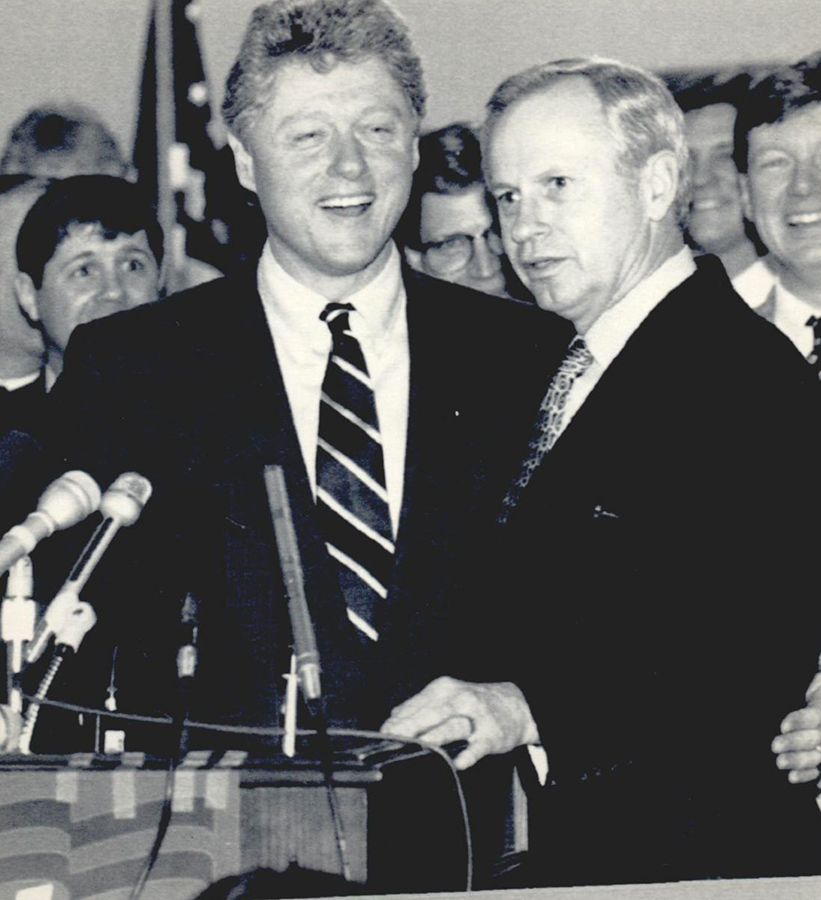 Born on November 30, 1940, in Cordell, Oklahoma, U.S. Rep. Glenn Lee English, Jr., was the son of Glenn and R. Marcella Rainbolt English. Educated in the public schools, young English graduated with a bachelor's degree in general business and accounting from Southwestern State College in Weatherford in 1964.

Although English began his professional career as a petroleum landman, politics soon attracted him. From 1965 to 1968 he served as chief assistant to the majority caucus of the California Assembly. In 1969 he returned to Oklahoma and became executive director of the Oklahoma Democratic Party, a position he held until 1973. A year after he returned from the West Coast, he married Jan Pangle. The couple had two children. English also had two children from an earlier marriage.

In 1974 English decided to enter the Democratic primary as a candidate for Oklahoma's Sixth District congressional seat. He defeated Republican incumbent John N. "Happy" Camp to win the first of ten terms. While in Congress, English served on the Committee on Agriculture and the Committee on Government Operations. He also was a member of the Select Committee on Narcotics Abuse and Control.

Originally viewed as a moderate, he became one of the most conservative Democrats of the southern members and often voted against the party leadership. A fiscal conservative on most issues, the Oklahoma congressman was an unwavering proponent of higher price supports for wheat and other Oklahoma agricultural commodities. In addition, he generally advocated free trade.

English chaired the Government Information and Individual Rights Subcommittee (later renamed Government Information, Justice, and Agriculture), which investigated government record keeping and individual privacy. When the Reagan administration tried to soften the Freedom of Information Act, the congressman steadfastly refused to support any compromise that would fundamentally cripple the act. He used his leadership role on the same subcommittee to win approval for the military to use aircraft and radar to assist drug enforcement agents. During the 1985–86 term English was instrumental in securing a $20 million federal hub in Oklahoma City to assist in the war on drugs.

In 1989 English became chair of the Conservation, Credit, and Rural Development Subcommittee with oversight of the commodities market. When it was shown that there was fraud in market practices, he drafted legislation to revise and eliminate abuses in futures trading, restrict dual trading, and afford stricter audit trails. The measure passed the House 420 to 0. The bill, which also reimplemented the Commodities Futures Trading Commission, died in the Senate. In 1992 a series of compromises led to the legislation's passage.

He also promoted rural development initiatives and worked on conservation issues. In 1992 English was successful in passing a law that made it easier to obtain farm loans. He was also integral in the successful passage of a bill that allowed for better telecommunications systems between rural health care providers and large urban hospitals. This program was overseen by the Rural Electrification Administration (REA). In 1993 English was also effective in halting a plan to reduce the work of the REA. In a series of meetings between the Committee on Agriculture and the White House, English successfully interceded between the two organizations to enhance the REA's status.

In late 1993 English decided to resign from his seat in Congress, effective in January 1994. In March 1994 he became vice president and general manager of the National Rural Electric Cooperative Association, headquartered in Arlington, Virginia.

The following (as per The Chicago Manual of Style, 17th edition) is the preferred citation for articles:
Carolyn G. Hanneman, “English, Glenn Lee, Jr.,” The Encyclopedia of Oklahoma History and Culture, https://www.okhistory.org/publications/enc/entry.php?entry=EN004.