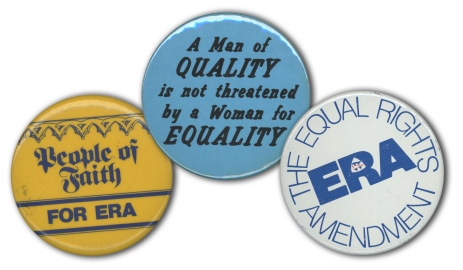 In 1923, three years after the passage of the Nineteenth Amendment, Alice Paul and other members of the National Woman's Party drafted a proposed constitutional amendment that would extend equal rights to women. Almost fifty years later, the U.S. Congress passed the Equal Rights Amendment (ERA), and it was forwarded to the states for approval on March 22, 1972. The amendment's three sections stated that "Equality under the law shall not be denied or abridged by the United States or by any state on account of sex. The Congress shall have the power to enforce, by appropriate legislation, the provisions of this article. This amendment shall take effect two years after the date of ratification." If ratified, the amendment would become the twenty-seventh to the U.S. Constitution. Amendments require ratification by three-fourths of the state legislatures.

Congress established a seven-year time limit for approval of the ERA by the states. The campaign started quickly. By 1975 thirty-four of the required thirty-eight states voted to approve the ERA. In 1977 Indiana was the thirty-fifth state to ratify the amendment. ERA supporters obtained an extension of the deadline until June 30, 1982.

The ERA initially enjoyed widespread support in Oklahoma. As the 1982 deadline neared, the state became a focal point for both advocates and opponents. Eleanor Smeal, president of the National Organization for Women, visited the state capital to urge Oklahoma legislators to approve the amendment. Finally, in 1982 the matter was taken up for debate in the legislature. Despite strong opposition in the House of Representatives, supporters hoped that approval in the Senate would provide the boost needed for passage. On January 13, 1982, the Senate vetoed the ratification bill with a vote of 27 to 21. The House of Representatives never brought the measure to a vote. Oklahoma was one of fifteen states, mostly southern and western, that did not ratify the amendment before time ran out. Consequently, the ERA was never enacted. In 2017 Nevada became the thirty-sixth state to ratify.

The following (as per The Chicago Manual of Style, 17th edition) is the preferred citation for articles:
Sarah K. Tyson, “Equal Rights Amendment,” The Encyclopedia of Oklahoma History and Culture, https://www.okhistory.org/publications/enc/entry.php?entry=EQ001.