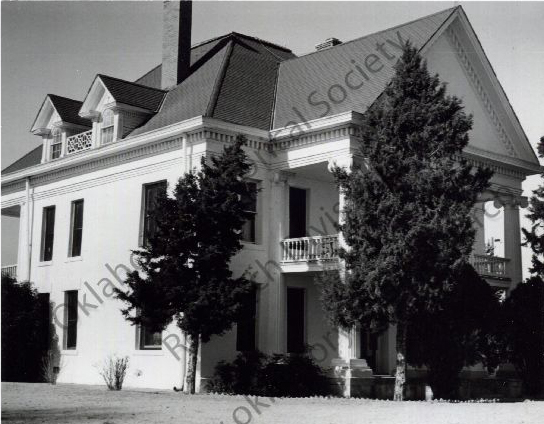 Located in far northwestern Garvin County, in south-central Oklahoma, the community originally called Elm Springs (later Erin Springs) grew up in a ranching and farming region, originally part of the Chickasaw Nation. The town was situated on a north-south stage route and named because of a large elm tree growing near the stage stand and for springs nearby. The present town is located two miles south of Lindsay on State Highway 76 and eleven miles west of Maysville.

Settlement began in the early 1870s, with the first known occupant being Frank Murray, an Irish immigrant, who came to the area in 1871 with his wife, Alzira McCaughey Powell, and her infant daughter by a first husband. Alzira Murray was part Choctaw, a descendant of Nathaniel and David Folsom. By 1875 a store had been established by two men named Miller and Green, and the community became known as Edgewood. A post office of that name was established there in March 14, 1875. Both post office and town name changed to Erin Springs on November 3, 1875. Of various stories about how Erin Springs got its name, the most plausible holds that Frank Murray named it for his homeland, "Erin" (Ireland). Another tale, that he named it for his daughter (or his son or his sister) Erin, may be contradicted by the U.S. Census of 1900, which indicates that Erin Murray (a woman) was actually born in 1880. By the 1890s Erin Springs boasted twelve houses, two stores (one with the post office), a drug store, a blacksmith, and a combination school/church/Masonic hall.

State gazetteers for 1909, 1911, and 1913 gave population figures of 300 residents and indicate that stores, a blacksmith, a doctor, and a school still functioned there. The town had telephone service but never had a newspaper. As with most rural communities, Erin Springs languished during the 1920s and 1930s, and transportation routes carried business to larger towns such as Pauls Valley, the county seat. The local economy was boosted by the development of oil fields close by during the post–World War II decade. By the 1960s only a small store and a Baptist Church remained. Erin Springs incorporated in the 1980s, and the U.S. Census recorded populations of 139 in 1990, 114 in 2000, and 87 in 2010. The Murray-Lindsay Mansion, constructed in 1880–1902, is listed in the National Register of Historic Places (NR 70000534) as "Erin Springs Mansion."

The following (as per The Chicago Manual of Style, 17th edition) is the preferred citation for articles:
Dianna Everett, “Erin Springs,” The Encyclopedia of Oklahoma History and Culture, https://www.okhistory.org/publications/enc/entry.php?entry=ER003.